IMB Lima City Team Leader Joe Busching, center, stands with Jerry Jean, (second from left), pastor of Emmanuel Baptist Church in Kansas City, and an unidentified pastor, far left, who has opened his church to plant the first Chinese Baptist Church in the Peruvian city. Busching, with his wife Kim, not pictured, are from Wildwood Baptist Church in Acworth. IMB/BEN LIN

Most people wouldn’t think of Peru as being a hub of Chinese work, but there are more than a million Chinese in the country, 200 thousand in Lima alone. They came for work three generations ago when the abolition of slavery left a void in the workforce. The Chinese “coolies” were indentured servants, and once they fulfilled their contracts, many stayed and opened their own businesses.

Today, Lima’s Chinatown is a bustling polestar of activity with markets, stores and an abundance of delicious food that Peruvians have grown to love. What is missing is churches. There are only 90 known Christians among them who meet together for worship, and no Baptist churches.

Veteran IMB missionaries Joe and Kim Busching arrived in Lima in 2016 after collaborating with churches in Venezuela for 14 years. As they surveyed this gateway city, taking stock of the task of reaching the lost here, they were impressed by the presence of so many Han Chinese.

Teams had tried to initiate a work among them in the past, but were unsuccessful. The Busching’s sensed God’s leading to try again. This time, they’ve been dumbfounded as they’ve watched God pull together an international network of people burdened to reach this group.

“My surprise has been how God appears to be answering the prayers of His people—how God is moving in the hearts of Americans, Peruvians, Bolivians, and Chinese to shine the light for the Han Chinese of Lima,” Kim said. 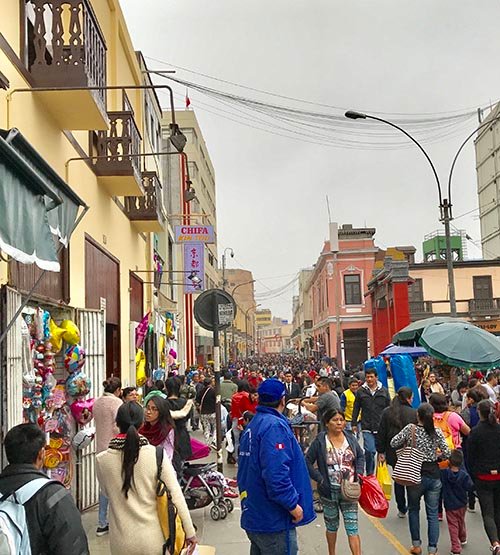 The history of the Chinese in Lima has been one of oppression, corruption, prejudice and human trafficking. Brought to Lima as indentured workers, they were a shade more fortunate than African slaves because they could earn their freedom, but still, their lives were difficult. After completing their contracts, these hard-working laborers focused on establishing their own community.

In 1983, China eased emigration restrictions and many more Chinese came to Lima to pursue business opportunities, making it the largest ethnic Chinese community in Latin America. The Chinese work ethic is reflected in the busy, crowded streets of Chinatown, which hosts more than 25 percent of the vendors in Lima’s city center.

But along with legitimate businesses, Chinatown’s narrow alleys also provide cover for crime and mafia activity. And the darker elements of shamans, palm readers and traditional Chinese religious practices lurk in the shadows.

The Buschings highlighted the need to reach the Chinese both to their leadership and to an IMB worker in East Asia, Ben Lin. Lin reached out to a partnering church in Kansas City, Emmanuel Chinese Baptist Church (ECBC). When ECBC heard about the need, they came to Lima to explore the possibilities.

They quickly understood the difficulty in accessing the Chinese. As the team prayed and walked through Chinatown, the crowds and chaos were overwhelming.

“We could hardly find any Chinese in Chinatown,” Ben said. “Where are they hiding?” he asked. 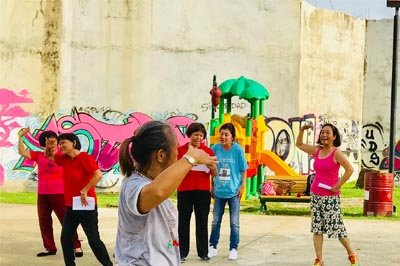 The team was looking for the 130,000 Chinese who are new immigrants in Lima. These new immigrants do not have the language skills to communicate to anyone on the street or to neighbors, so they cluster in Chinese neighborhoods that are not obvious to strangers.

“It is like finding needles in a haystack of 10 million Peruvians,” Lin said.

In desperation, the team prayed for God to show them how to proceed. Just then, they saw a local Chinese woman, Lily,* with a big smile. She invited them to her language school, leading them down a narrow street that led to a quiet neighborhood and an apartment complex with hundreds of Chinese immigrants.

It turned out Lily was a Christian who opened a Spanish language school as a way to reach newly arriving Chinese immigrants.

“She grew up worshiping idols like most Chinese. She emigrated to Lima to start a business. She was wealthy with a broken family and a failed business, hopeless and suicidal. But one day someone pointed her to Christ, and her life was transformed,” Lin said. “She wanted to reach out to the new immigrants to lead them to Christ, to help them find the real purpose in life, the real joy.”

Meeting Lily was a confirmation for the team from Kansas. For Lin it was even more meaningful.

“It was a tremendous joy—many answered prayers—like welcoming rain after years of drought,” Lin said. “The Lord is already at work in Lima,” Ben said. “He sent Lily to us.”

As the team shared the gospel with the students at Lily’s language school, God impressed the great need on the Kansans’ hearts. The pastor of ECBC, Jerry Jean, started recruiting more workers during the vision trip. He shared with a group of Peruvian Baptist pastors his burgeoning desire to plant a Chinese Baptist church and challenged them to come alongside him and help. Jean believes any work started there will be healthier if a national Peruvian church is involved. Two local pastors responded enthusiastically and offered their assistance and a place to meet. 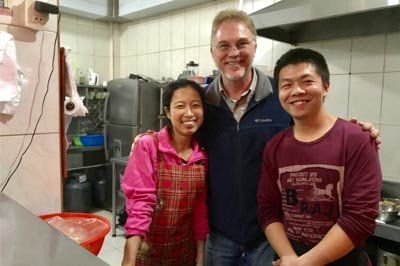 When the team returned to Kansas and shared all they had seen and felt, the church decided to adopt the Chinese of Lima with the goal of planting the first Chinese Baptist church in the city.

“But God wasn’t done yet,” Kim said.  Another IMB colleague in Lima, Amy Fisher, attended a conference for South American missions called COMIBAN. She heard of a woman from Bolivia who wants to work among the Chinese. “So now we are praying and exploring how to help her answer God’s call and join in this work,” Kim said.

But still, God isn’t through gathering the team. First Chinese Baptist Church of Walnut, California, is sensing that God is calling them to join in the effort to reach the Chinese in Peru. And this church is already talking about incorporating another Chinese Baptist church from another country to work alongside them in Lima.

In addition to these churches, two Peruvians with a call to the Chinese have been identified.

“Our team is exploring ways to help them be obedient and join in this harvest field,” Kim said. 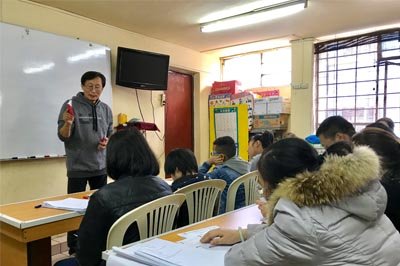 A volunteer from Emmanuel Chinese Baptist Church, Kansas City, shares the gospel with new immigrants from China at a Spanish language school in Lima. IMB/BEN LIN

ECBC is trying to find someone to come full time as a missionary, and there is even a possibility that a Chinese missionary may come from China to work in Lima.

“Once they have someone on the ground, then the US Chinese church send in short-term teams to help with evangelism and other opportunities,” Amy said. “Lima is a very big city with lots of Chinese spread out all over. We need to have more churches to reach them.”

As this gateway city team forms and the vision grows, the team is praying for wisdom to know where to focus their efforts. They are seeking the right connections within the community. But they have full confidence that God already has a place in mind and is leading them step by step.

“When I look at what God has done, it has been a great reminder that the task isn’t for an individual or a team or a single church,” Kim said. “This task is for believers of every tongue, tribe, and nation. As He unites all of us, please pray that His vision alone would guide each of our hearts.”

US pledges $1 billion more rockets, other arms for Ukraine