On its Facebook page, Cascade Hills Church in Columbus shares the story of Marco, who was invited by a friend to a service and after accepting Christ wantied to be baptized immediately. The next week Marco and his entire family gathered at the outdoor baptism pool on the church's property to celebrate his decision. Cascade Hills experienced the most baptisms among Georgia Baptist Mission Board churches in 2016, with 472 stepping forward to make the decision. CASCADE HILLS/Facebook
Posted Wednesday, September 20, 2017 4:49 pm
Scott Barkley 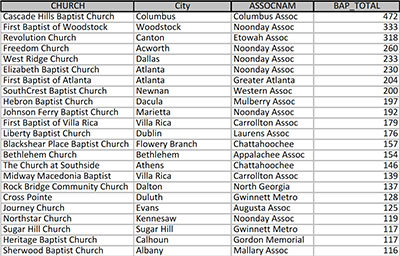 To see all Top 200 Georgia Baptist Convention churches in baptisms for 2016, click on the image above.

The best strategies tend to be the simplest. And to that measure, they're fairly well-known. When it comes to evangelism, both of those statements hold true, testifies Randy Mullinax of the Georgia Baptist Mission Board.

"'Fruitful' churches create a spirit of evangelism," says Mullinax, a part of the Mission Board's Church Revitalization and Evangelism staff. Regarding the top 200 Georgia Baptist churches in terms of the number of baptisms in 2016, he points to three reasons why churches can see an increase in evangelism, and thereby baptisms.

"If the vision to share the gospel isn't cast from the platform, it doesn't connect with the people," he points out. Preparing others for evangelism is one thing. However, someone needs to set the tone. The best person for that remains the man standing each Sunday behind the pulpit.

"If the pastor doesn't model reaching people for the gospel, the effort will falter," Mullinax contends. "Most effective churches, we've noticed, have a pastor who can present to the church family someone with whom he's shared the gospel. Sometimes, that person is standing in front of them about to be baptized. Other times the pastor can tell a story where he recently told someone about Jesus. Maybe a decision wasn't made them, but it models a lifestyle of evangelism."

Equally important, Mullinax points out, is sharing those times when an individual wasn't receptive.

"Celebrate the effort. People need to know the pastor gets shut down sometimes as well. It's about the activity of telling others about Christ, not just the final result."

Mullinax points to an observation by fellow state missionary and evangelist Scott Smith regarding the tendency of congregations.

"Churches naturally drift away from evangelism. It's important to return to that focus and evaluate. Does what we do have direct ties to making disciples who also make disciples? Train your people to to share the gospel and lead people to Christ. Then, equip those new believers to do the same."

He stresses an obvious difference, and key advantage, in new believers sharing their testimonies. "They have more contact with lost people," Mullinax says, "than long-term church members." 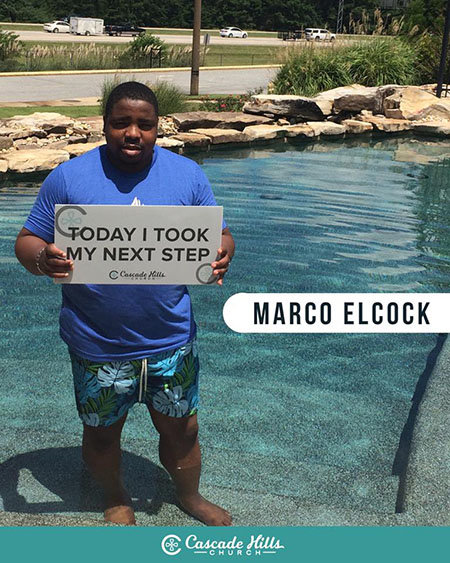 On its Facebook page, Cascade Hills Church in Columbus shares the story of Marco, who was invited by a friend to a service and after accepting Christ wantied to be baptized immediately. The next week Marco and his entire family gathered at the outdoor baptism pool on the church's property to celebrate his decision. Cascade Hills experienced the most baptisms among Georgia Baptist Convention churches in 2016, with 472 stepping forward to make the decision. CASCADE HILLS/Facebook

It's possible to be intentional without a plan. Concentrating on the former without the latter, however, often leaves church members frustrated and disillusioned.

"Think about how you're tying together what you do at church with reaching others," points out Mullinax.

The Georgia Baptist Mission Board Evangelism department offers training resources for that purpose through its Reach strategy. Upon registering, viewers receive access to videos highlighting discussions on evangelism. Those videos feature Mullinax, Smith, and Georgia Baptist Vice President of Church Revitalization and Evangelism Larry Wynn diving into topics such as praying for the lost by name, personal evangelism, and modifying Sunday mornings for an optimal evangelistic experience.

Georgia Baptists utilizing those tools in their communities can also hear those principles lived out at the REACH Evangelism Conference Jan. 29-30 at Central Baptist Church in Warner Robins. Speakers include Johnny Hunt, Junior Hill, Ed Stetzer, H.B. Charles, and Bill and Brent Purvis.

Bill Purvis serves as pastor of Cascade Hills Church in Columbus, which led all Georgia Baptist Convention churches in 2016 at 472 baptisms. Brent, his son, serves as co-pastor.