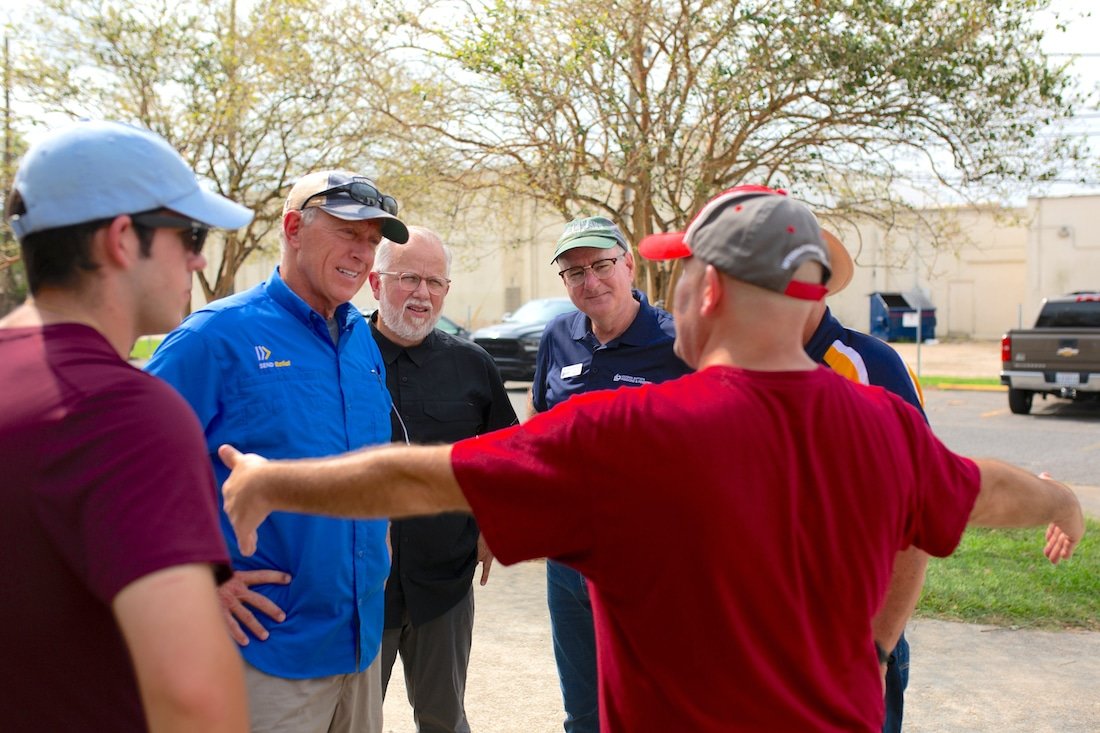 NEW ORLEANS – A year after taking a battering from Hurricanes Laura, Delta and Zeta, the people of Louisiana have been recovering from another direct hit by one of the stronger tropical systems ever to hit the mainland United States: Hurricane Ida.

“This has been an eye-opening experience to see the vast destruction of Hurricane Ida,” Litton said. “A director of missions told me during my visit here that Ida is worse than Hurricane Katrina in a lot of ways, in its impact on churches, pastors, members and local communities that were devastated by the powerful winds, floods and now extended periods without electricity.”

David Cranford, current Louisiana Baptist Convention president and pastor of First Baptist Church Ponchatoula, La., and John Hebert, state director of missions for Louisiana Baptists, hosted Litton and Wright as they visited churches and communities that had been wrecked by the storm. 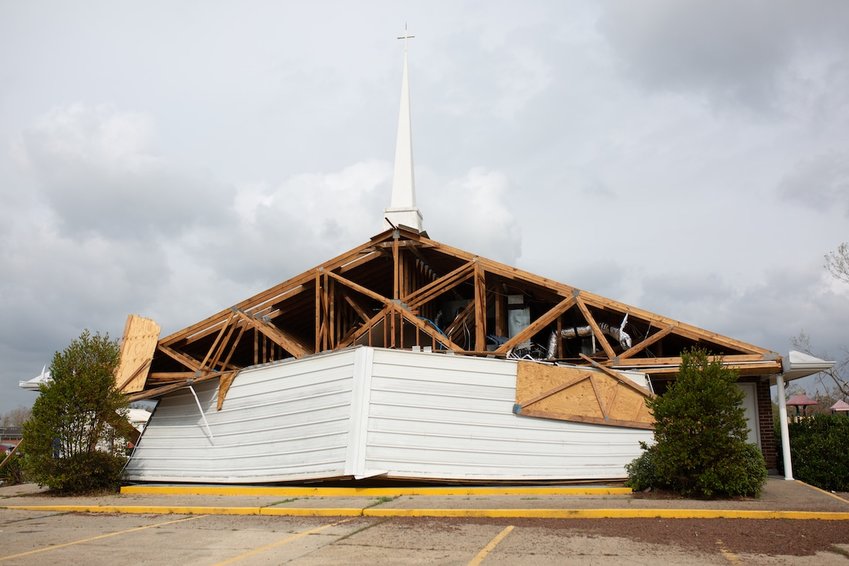 The River Parishes campus of Celebration Church in Laplace, La., suffered significant damage when Hurricane Ida hit Louisiana on August 30. The facility is likely going to have to be torn down and is one of roughly 80 churches in the state that were significantly damaged during the storm. Photo by Alexandra Toy.

“After seeing more devastation in Louisiana from another hurricane,” Wright said, “I’m so thankful for the state disaster relief teams that have come in quickly to provide tens of thousands of meals for people in need.”

Shane Newton, pastor of First Baptist Church Laplace, La., rode out the storm in his church building since it was one of the safest facilities in Laplace.

“It was six hours that was pretty intense because we stayed in the eye wall the whole time,” Newton said. “The building was sturdy. When the roof came off, that’s when we ran for shelter. It was constant, the wind blowing.”

First Baptist Laplace was not the only building to suffer significant damage in the town. The Celebration Church campus in Laplace is expected to be a total loss as wind tore and shredded the building’s metal roof, strewing sheets of the metal roof across a small field behind their property.

Laplace, Kenner, La., and many other communities just west of New Orleans received a massive blow from Ida as the storm migrated inland 100 miles from shore.

North Carolina Southern Baptist Disaster Relief (SBDR) volunteers set up their operation in the parking lot of First Baptist Church New Orleans to feed and serve residents as the power was being restored to the city. 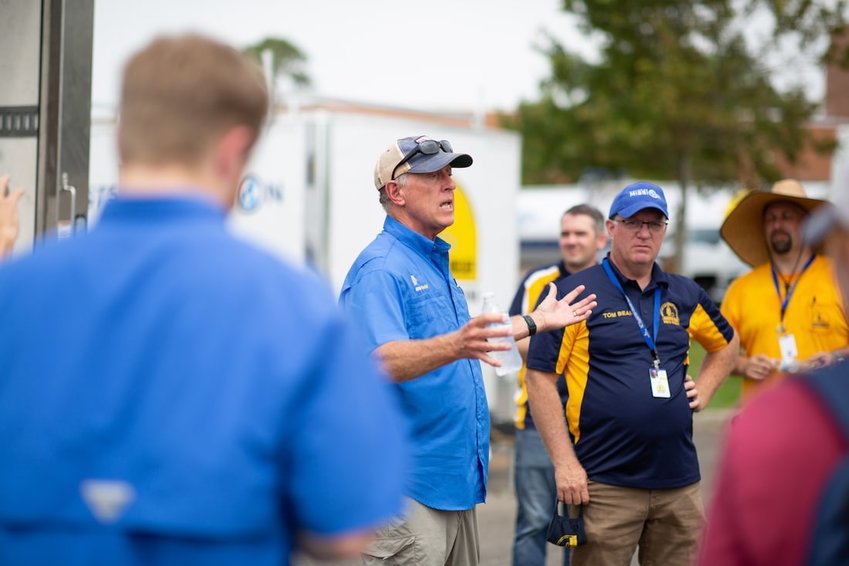 Send Relief president, Bryant Wright, addresses a group of Southern Baptist Disaster Relief volunteers with North Carolina Baptists On Mission. The North Carolina group stationed at First Baptist Church, New Orleans following Hurricane Ida to prepare meals and serve residents who were in need after the storm knocked out power for more than a week. Photo by Alexandra Toy.

Beam and North Carolina SBDR volunteers showcased their state’s SBDR kitchen, which had prepared 12,500 meals that morning with The Salvation Army delivering them out into the surrounding communities.

Chad Gilbert, pastor of First Baptist New Orleans, only recently became the senior pastor of the church after serving as an associate pastor at Trinity Baptist Church in Lake Charles, La., a city that was devastated by Hurricane Laura in 2020. Trinity served as an SBDR recovery site following Laura, so Gilbert has experienced how Southern Baptists come together during crises like Hurricane Ida.

“In a way, I feel like this is how Christ fulfills His promise in the Great Commission, ‘Surely, I’m with you always to the end of the age,’” Gilbert said. “I feel like He manifests that promise through the Body of Christ. There wasn’t a moment in my time in Lake Charles or here where I felt like, ‘I’m going through this alone.’ I already knew we were going to be enveloped by Southern Baptists and disaster relief.” 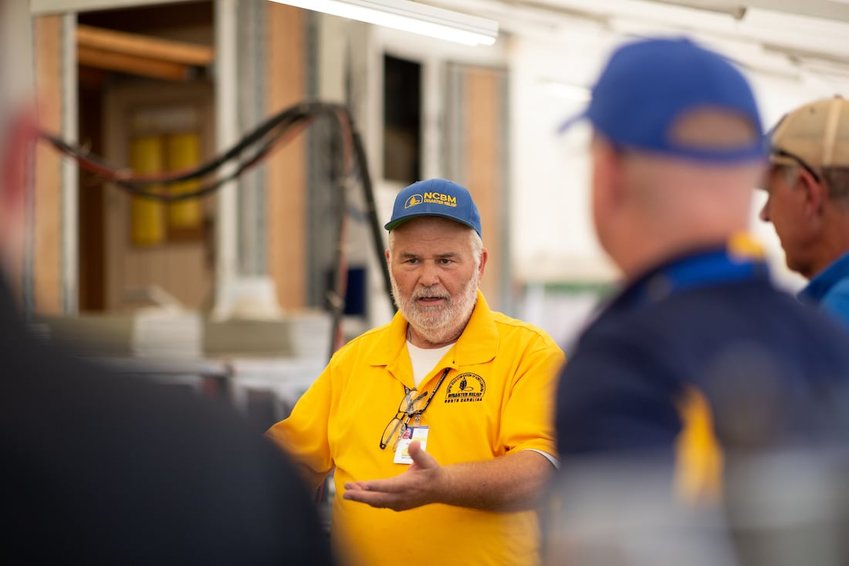 The Littons and Wright also visited Woodland Park Baptist Church in Hammond, La., where an SBDR team from Arkansas set up a feeding and recovery site. There, SBDR volunteers prepared meals from their mobile kitchen, and chainsaw teams helped remove downed trees and other debris as residents requested help.

Southern Baptists have united in responding to Hurricane Ida to help meet desperate needs with tangible, material help and with the eternal, spiritual hope of the gospel.

“I am deeply moved by the spirit of cooperation that exists among our Southern Baptist family,” Litton said of the trip. “State conventions, associations, the North American Mission Board and Send Relief all lead us to bring relief and the love of Jesus to stricken areas and hurting people.” 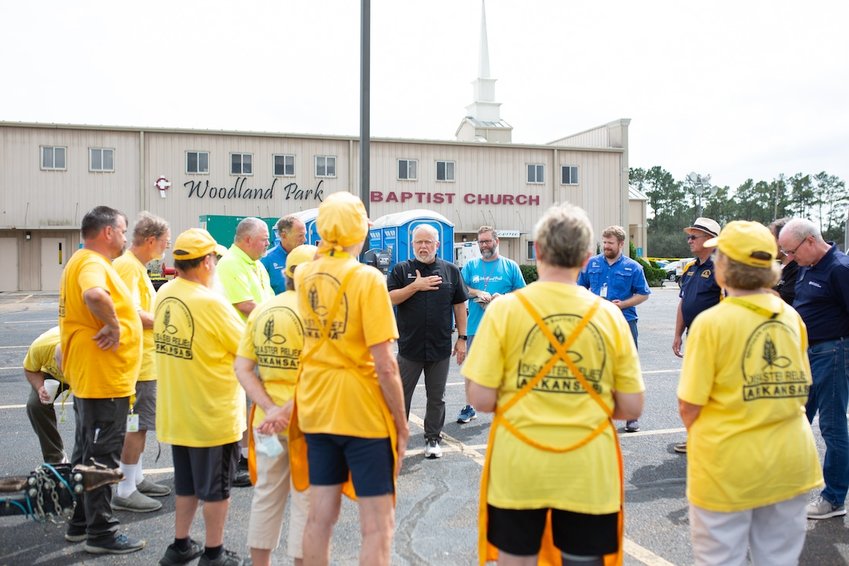 Southern Baptist Convention president, Ed Litton, shares a word of encouragement and prayer for Southern Baptist Disaster Relief teams from Arkansas as they served at Woodland Park Baptist Church in Hammond, La., in the aftermath of Hurricane Ida. Photo by Alexandra Toy.

Herbert expressed his gratitude to Baptists from across the nation, including their fellow state convention partners, Send Relief and the entire SBC family, saying it would be impossible to respond without their help.

“Our thanks are for the cooperation and for God’s grace for helping people in our state,” said Herbert. “Without a strong cooperative effort, Louisianians would be in dire straits. So, thank you Southern Baptists for that blessing.”

The Louisiana Baptist Convention is available to help connect Southern Baptists with Louisiana churches that are facing challenges in the aftermath of Hurricane Ida. Through church-to-church partnerships, Southern Baptist churches from across the nation can serve churches and assist those churches in meeting needs in their communities.

“This recovery will be a long process for the people of Louisiana,” Wright said. “But the opportunities to show the love of Christ and share the gospel will be great when we serve others who are in the middle of this great time of need.”