"Atlanta traffic" doesn't necessarily stop with Atlanta. This metro-area accident involving 20 vehicles on Sunday in Bartow County caused all lanes on I-75 South to be blocked for four hours. SCOTT BARKLEY/Index

It's always been an easy target of scorn for those living in the metro area. In my case, Atlanta traffic was the daily 120-mile-round-trip colossus I tussled with for 12 years, Monday through Friday (except for days off and vacation ... you get the idea, though. I drove it a lot.)

In that time, I learned the lesson that if you pray for God to help you in your personal growth, opportunities will arise. For commuters such as myself those areas included patience, awareness, patience, time management, patience, reflexes, and patience. It also helped to know the locations of the gas stations with the clean(er) bathrooms.

My work schedule no longer requires I tackle 285 every day, but I can speak to what it's like. I've dodged pre-dawn bumpers left in the middle of the road. I've learned to never drive behind a truck carrying approximately 200 ladders lashed to it by an assortment of ropes, bungee cords, and bread-bag twist-ties. And, as tough as it is to navigate all of this in a Camry, imagine what it's like in a big rig. Yeah, when they need to move over a lane, let in the truckers carrying all those goods we use.

Now, it's as if the city got bored with standard traffic causes and wants to develop new ones such as setting bridges on fire – yes, "bridges" as in plural – and causing sections of road to buckle up suddenly. As if those instances didn't seem biblical enough, we're also expecting our own plaque of locusts any day now. It's no surprise the Internet came up with this little gem recently.

Snowjam and meeting a new friend

When I started with The Index in 2004, smart phones weren't around. Instead, I kept paper maps (remember those?) of Atlanta as well as the counties of Cobb, Fulton, Cherokee, and Forsyth in my glove box. When I explain this to my children they look at me as if I'm describing that rafting trip I took with Lewis and Clark.

Some days, traffic could be so bad I pondered turning around and spending the night in the office. On Jan. 28, 2014, I should have. That's when two inches of snow came to rest on top of a layer of ice to cripple the city, an event known as Snowjam. Leaving work early, I tried to drive alongside a jillion other people, sliding and tire-spinning my way to within 15 miles of home.

At that point, parked beside a small Methodist church, I realized I wouldn't make it any further. Radio reports talked of nothing but clogged roads and cars stuck in ditches. Eventually, I found shelter for the night in a stranger's house. A great guy who had just walked several miles from where he'd left his truck, his own family didn't make it home until much later that night.

For those of you still in that traffic grind, I've got a few things to pass along.

Make the most of it

There's no way around it. Traffic – wherever it happens – is a bear. But, there are things you can do to help redeem the time. If you're an experienced commuter you've probably already heard of some of these, but maybe I can give you a few more.

Listen to podcasts. This platform has been around several years, but recently experienced an explosion in popularity. Name a topic and it's available, whether religion, news, sports, culture, or learning a new language. Those popular among Southern Baptists include Al Mohler's "The Briefing" and LifeWay President Thom Rainer's "Rainer on Leadership." "SBC This Week," a fairly new podcast, explores discussions within the convention. A couple outside of those areas I enjoy include "The Art of Manliness" and "The Good Dad Project."

Listen to your Bible. Maybe you didn't realize it, but the Bible on your phone has a voice function. Great way to stay on your reading plan. And, it helps with your state of mind when you've been looking at the same rear bumper for 10 miles.

Call someone. If not your spouse to give an update on your progress, then call a friend you haven't talked to in awhile. From your car, check in on a widow or widower in your church.

Audiobooks. Through my local library, I'm able to check out audiobooks directly to my phone on an app. This has been invaluable and helped me "read" books I'd not gotten the time to experience otherwise.

Pray. Yes, you knew this was coming. In addition to praying for the brake lights in front of you to magically go away, think through the requests shared on Sunday in Bible study. Consider requests family and friends would give if you told them you wanted to dedicate a section of your drive to praying for them.

Find your tribe. As was my case, there's a chance you're not the only commuter in your circles. Once a week, I met with a group of guys at a coffee shop some 50 miles from where we all went to church, but also on "the other side" of traffic and closer to our work.

Look for ways to make your drive earn its keep. There are two renown children's hospitals in Atlanta near where I drove to and from work. Several times over the years my commute allowed me to go by and sit with friends whose children were there for different reasons, whether cancer treatment or after cracking their skull in a skateboard accident. 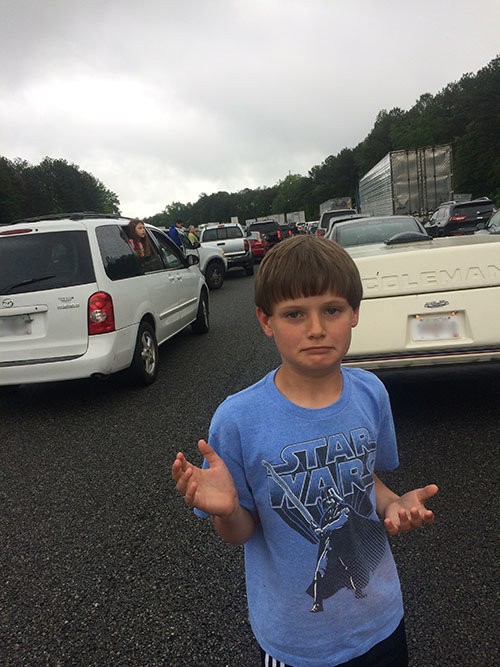 Whaddayagonnado? Getting an early taste of Atlanta traffic on I-75 Sunday, young Will Bishop eventually got to the trampoline jump park alongside the writer's son, who was celebrating his eighth birthday.

My work situation, like I said, no longer requires I deal with Atlanta traffic on a daily basis. However, my kids shake their heads when I tell everyone to be quiet so I can hear the latest update from WSB's Doug Turnbull or Mark Arum. I can't help it. When it's bad on the road, I feel for those folks because I was there so many times.

And there are times when you're right back in it. Last Sunday, on the way to a trampoline jump park with my wife, sons, one daughter, and two friends of my younger son, I experienced the joy of being stuck four hours on an interstate thanks to a 20-car pileup. Standing on I-75, I made friends with fellow drivers. The kids invented the new games of interstate tag (played running around the parked minivan) and interstate ditch football.

But later on, I realized how lucky we'd been. We were a quarter-mile behind the accident. If we leave the pizza place a few minutes earlier or don't get caught by that stop light, we very well could've been among the wreckage.

So, it's okay to be frustrated. But look for the ways to give thanks and be grateful. Yes, even for traffic.