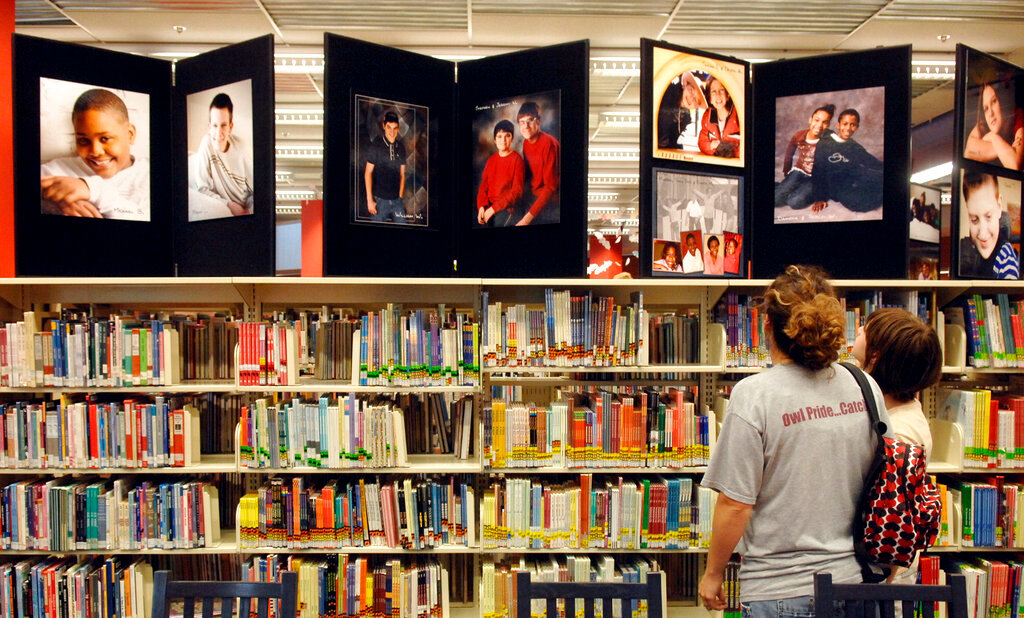 Sarah Prince and her daughter Katie Cuscaden, 12, look at portraits of children who are seeking to be adopted, on display at the Columbia, Mo., Public Library. The children are part of the Third Annual Missouri Adoption Heart Gallery. (AP Photo/Columbia Daily Tribune, Don Shrubshell, File)
Posted Tuesday, May 17, 2022 6:28 pm
By TOM STRODE, Baptist Press

ALEXANDRIA, Va. (BP) – A substantial drop in the number of adoptions in the United States coincided with the first year of the COVID-19 pandemic, according to a new report.

Intercountry adoptions declined by 45 percent from 2019 to 2020; private, domestic adoptions by non-stepparents by 17 percent; and public adoptions from foster care by 13 percent, the National Council for Adoption (NCFA) reported May 11.

The fall in adoptions by Americans during the pandemic followed a 16-year plunge in the number of children adopted from other countries. International adoptions plummeted by more than 90 percent from a peak of 22,989 in 2004 to 1,622 in the fiscal year that ended in September 2020, according to the U.S. State Department. Meanwhile, total domestic adoptions in the United States dropped from 133,737 in 2007 to 115,353 in 2019, the NCFA estimated.

Southern Baptist public policy specialist Hannah Daniel called it “deeply concerning to see the dramatic impact that the COVID-19 pandemic has had on all types of adoptions.”

“Jesus tells us that caring for orphans and vulnerable children is an essential part of living out the Christian faith,” said Daniel, a policy associate with the Ethics & Religious Liberty Commission (ERLC), in written comments for Baptist Press. “It is critical that the Church continue loving and caring for these children through adoption and finding ways to enhance and grow these efforts. The ERLC is committed to advocating for policies that further that goal.”

Herbie Newell, president and executive director of Lifeline Children’s Services, said he thinks the pandemic “did a lot of things as far as motivation to adopt.”

During the pandemic, knowing “that kids were languishing and that kids were in need at the same time we were locking our homes down, we were putting on masks, we were talking about social distancing” proved a “confusing message” for many families, he told BP in a phone interview.

“One of the things I think internationally that definitely COVID has affected is travel,” Newell said. “Of course, there’s still 400 kids that have been matched with U.S. families that are waiting to come home from China, and we don’t know when the end of that will be.”

The fact few children from China – the leading sending country for intercountry adoptions in 2019 – were adopted in 2020 and none in 2021 and 2022 has definitely affected the number of international adoptions, he said. The Chinese government has prohibited travel by adoptive families into the country during the pandemic.

The State Department largely attributed the 45 percent decline in intercountry adoptions by Americans from 2019 to 2020 to the pandemic’s effect “on operations in countries of origin worldwide, travel restrictions” and its own “Do Not Travel” global advisory.

In its report, NCFA said the pandemic “upended nearly every aspect of life in the United States, and child welfare is not an exception.” While the federal government had reported the decline in intercountry and public adoptions, its new report is the first to demonstrate the drop in private, domestic adoptions, according to NCFA. No government agency or non-governmental organization other than NCFA reports on the number of private, domestic adoptions.

NCFA acknowledged the fall in intercountry and public adoptions could possibly reflect delays in adoptions that occurred after the federal fiscal year ended in September that might result in “a catch-up” later but said it would be “unlikely to be true” for private, domestic adoptions.

Ryan Hanlon, NCFA’s acting president, said the report demonstrates “how great the need is for more Americans to consider adoption, particularly adoption from foster care and intercountry adoption where thousands of children continue to wait.”

“[T]here are too many children being left behind without a permanent, loving family here in the U.S. and around the world,” he said in a written release.

About 5.2 million children in the world have lost either a parent or caregiver to COVID-19, the Lancet Child & Adolescent Health medical journal reported in February.

“One thing that I would hope as believers and especially as Southern Baptists that as we look at those numbers that we don’t believe or begin to think that it is because there’s not need,” Newell said. “The need of children has actually risen.

“[T]he most vulnerable have become more vulnerable. [W]e need believers to step up to the plate and agree to foster, to adopt domestically, to care for kids in need and to adopt internationally.”

Newell added that he “would pray that as a church we would look at it from a much more child-centered approach and see that there are children in need and what can we do for those children in need,” he said. “And maybe we’re not called to adopt, but what are the other things that we can do for children in need and how can we really meet the children who are waiting and find parents and resources for children as opposed to finding children for parents. And I think if we would do that, just that subtle shift, we would really see more believers get into the space of child welfare.”

Hanlon recommended Americans pursuing a private, domestic adoption prepare for “longer wait times, and increasing costs, because the reality is that there are far more hopeful adoptive parents than there are infants being placed for adoption each year.” NFCA has seen that trend “accelerate during the pandemic,” he said.

In its report, NCFA’s recommendations included a requirement that states report on the number of private, domestic adoptions, as well as federal and state funding to inform birth parents about adoption. The report also consists of adoption statistics from each state.

In its advocacy for child-welfare policies, the ERLC is supporting congressional passage of the Child Welfare Provider Inclusion Act and the Adoptee Citizenship Act. The former would bar government discrimination against adoption agencies and other child-welfare organizations that refuse to take part in serving in a way that contradicts their beliefs. The latter closes a loophole in a two-decade-old law by enabling a child born overseas and adopted by an American citizen to acquire citizenship upon passing specific requirements regardless of when the adoption was completed.

The House of Representatives approved the Adoptee Citizenship Act in February as part of the America Creating Opportunities for Manufacturing, Pre-eminence in Technology and Economic Strength (COMPETES) Act. The Senate passed its own version of the overall bill without the adoption measure, and the ERLC has urged a conference committee to include the Adoptee Citizenship Act in the final, compromise legislation.

Lifeline Children’s Services, which is based in Birmingham, Ala., performs child-welfare work in more than 20 countries. Its domestic work in 16 states includes pregnancy counseling, adoption and family restoration.