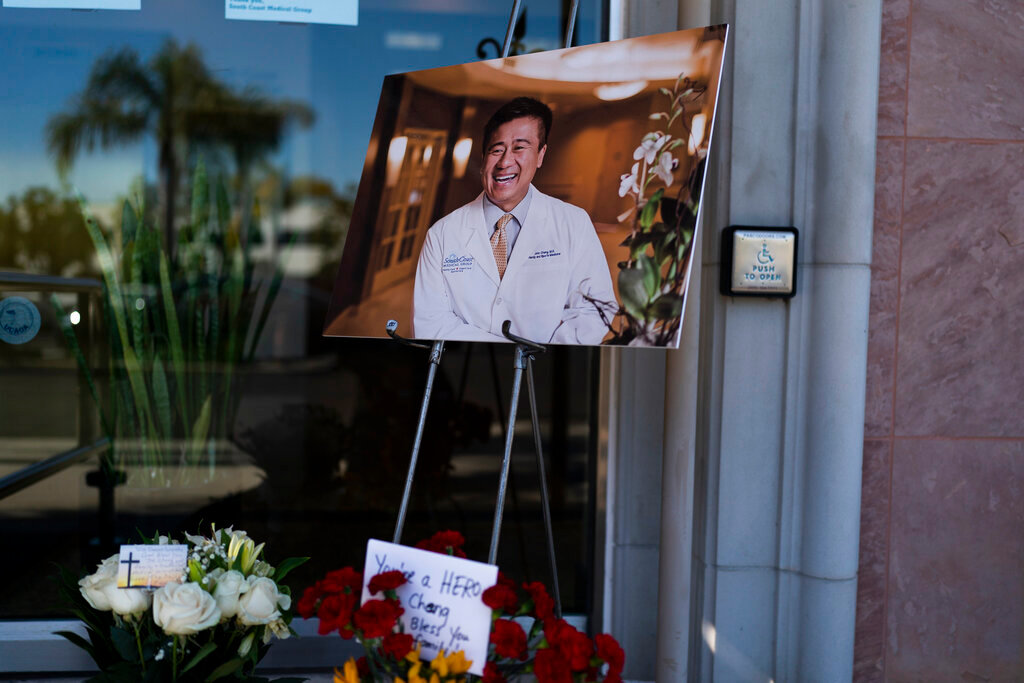 A photo of Dr. John Cheng, a 52-year-old victim who was killed in Sunday's shooting at Geneva Presbyterian Church, is displayed outside his office in Aliso Viejo, Calif., Monday, May 16, 2022. Authorities say a Chinese-born gunman was motivated by hatred against Taiwan when he chained shut the doors of the church and hid firebombs before shooting at a gathering of mainly of elderly Taiwanese parishioners. (AP Photo/Jae C. Hong) 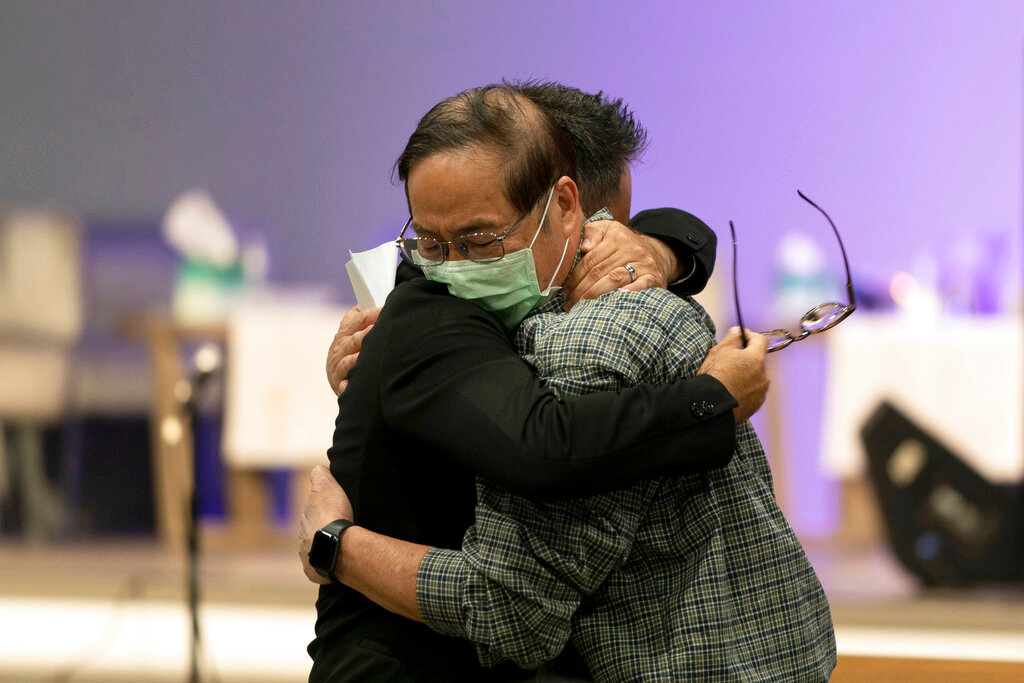 Jason Aguilar, left, a senior pastor at Arise Church, comforts Billy Chang, a 67-year-old Taiwanese pastor who survived Sunday’s shooting at Geneva Presbyterian Church, during a prayer vigil in Irvine, Calif., Monday, May 16, 2022. Authorities say a Chinese-born gunman was motivated by hatred against Taiwan when he chained shut the doors of the church and hid firebombs before opening fire on a gathering of mainly of elderly Taiwanese parishioners. (AP Photo/Jae C. Hong) 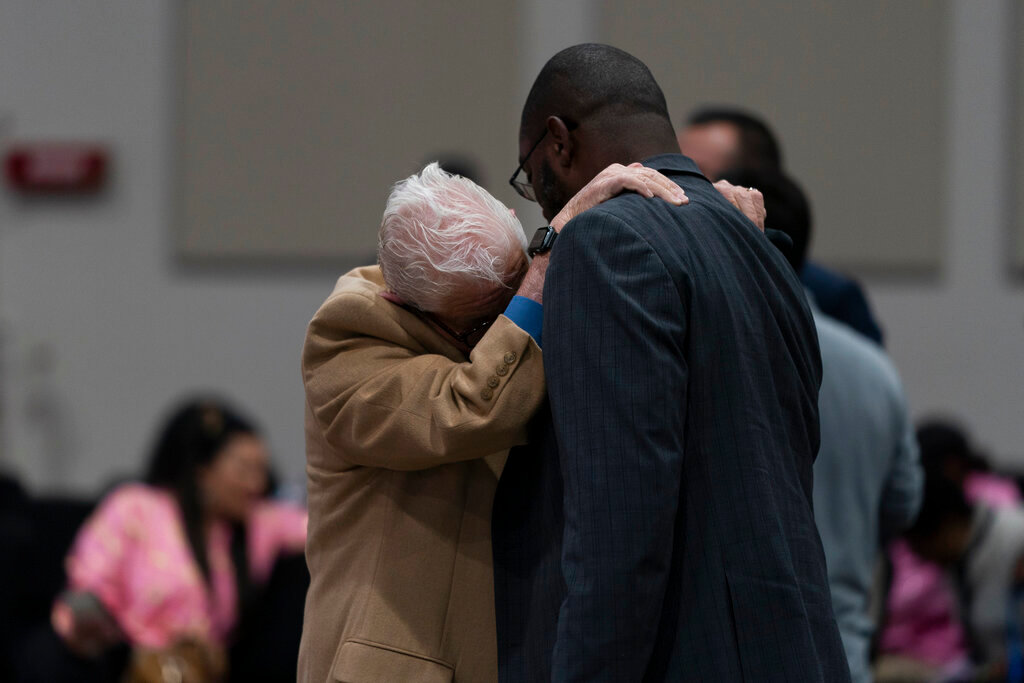 Two men chat at a prayer vigil in Irvine, Calif., Monday, May 16, 2022. The vigil was held to honor victims in Sunday's shooting at Geneva Presbyterian Church in Laguna Woods, Calif. Authorities say a Chinese-born gunman was motivated by hatred against Taiwan when he chained shut the doors of the church and hid firebombs before opening fire on a gathering of mainly of elderly Taiwanese parishioners. (AP Photo/Jae C. Hong) 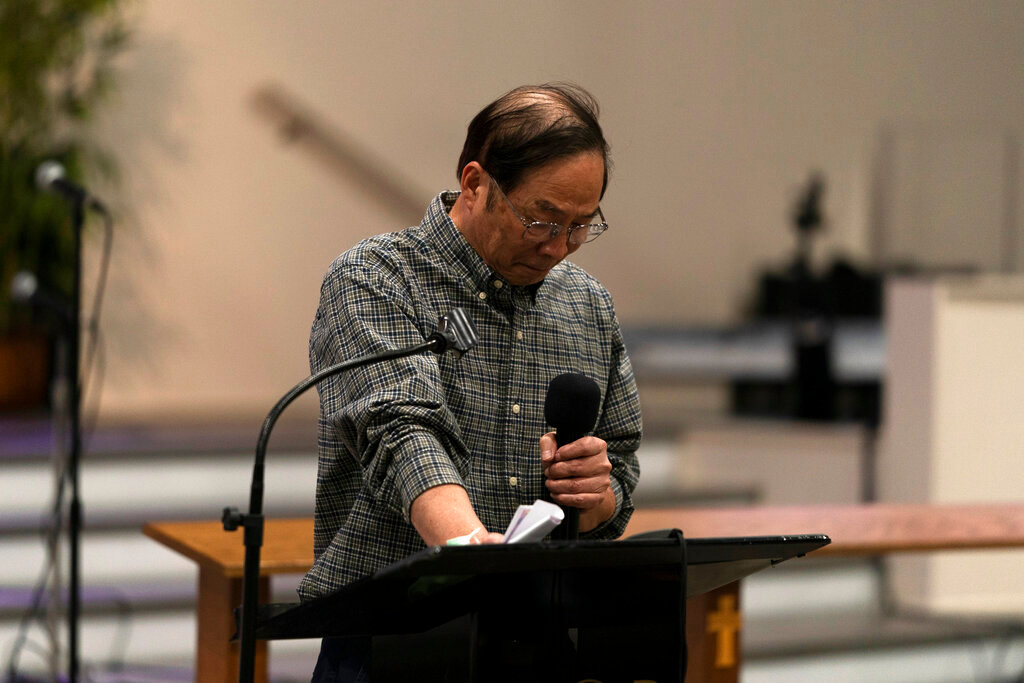 Billy Chang, a 67-year-old Taiwanese pastor who survived Sunday’s shooting at Geneva Presbyterian Church, speaks at a prayer vigil in Irvine, Calif., Monday, May 16, 2022. Authorities say a Chinese-born gunman was motivated by hatred against Taiwan when he chained shut the doors of the church and hid firebombs before opening fire on a gathering of mainly of elderly Taiwanese parishioners. (AP Photo/Jae C. Hong) 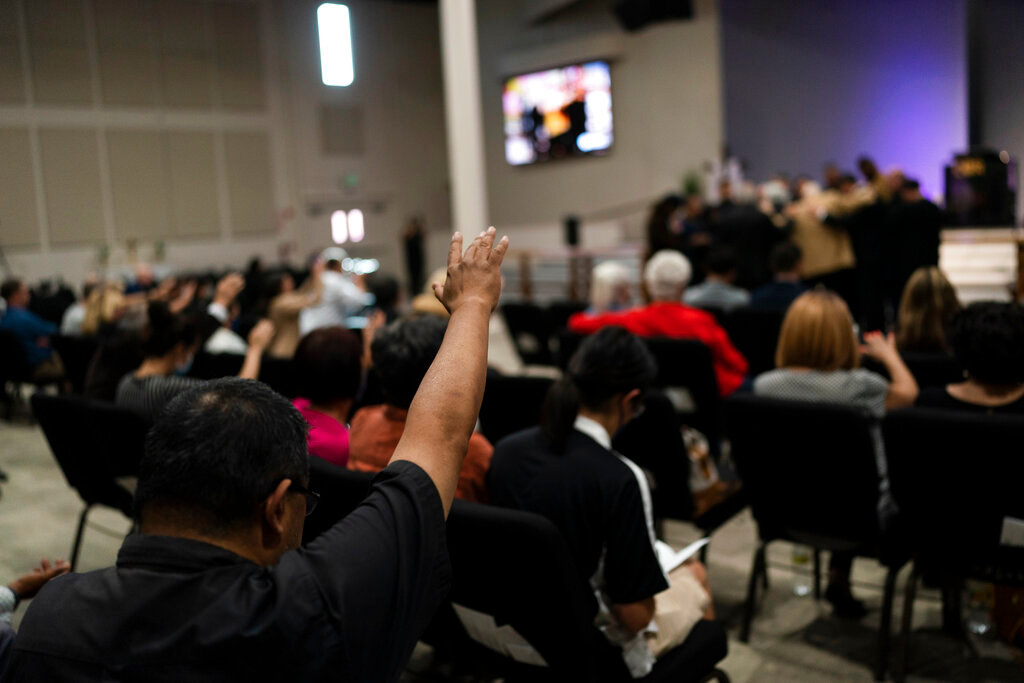 Ed Liou prays for victims in Sunday's shooting at at Geneva Presbyterian Church during a prayer vigil in Irvine, Calif., Monday, May 16, 2022. Authorities say a Chinese-born gunman was motivated by hatred against Taiwan when he chained shut the doors of the church and hid firebombs before opening fire on a gathering of mainly of elderly Taiwanese parishioners. (AP Photo/Jae C. Hong)
Previous Next
Posted Tuesday, May 17, 2022 9:11 am
By AMY TAXIN and STEFANIE DAZIO, Associated Press

LAGUNA WOODS, Calif. (AP) — A gunman motivated by hatred against Taiwan chained shut the doors of a California church and hid firebombs before shooting at a gathering of mostly elderly Taiwanese parishioners, killing a man who tackled him, authorities said.

David Chou, 68, of Las Vegas — a U.S. citizen whom authorities say grew up in Taiwan — drove to Orange County on Saturday and the next day attended a lunch held by Irvine Taiwanese Presbyterian Church, which worships at Geneva Presbyterian Church in the community of Laguna Woods. Though he knew no one there, he spent about an hour mingling with about 40 attendees and then executed his plot, authorities said at a news conference.

He chained the doors and put super glue in the keyholes. He had two 9 mm handguns — legally purchased years ago in Las Vegas — and three bags, containing among other things four Molotov-cocktail-type incendiary devices and extra ammunition. He opened fire and in the ensuing chaos Dr. John Cheng, 52, tackled him, allowing other parishioners to subdue him and tie him up with extension cords.

Cheng died and five people were wounded, the oldest 92. Sheriff Don Barnes called Cheng’s heroism “a meeting of good versus evil” that probably saved the lives “of upwards of dozens of people.”

Chou was booked on suspicion of murder and attempted murder and jailed on $1 million bail. He was expected to appear in state court Tuesday. It was not immediately clear whether he had an attorney who could speak on his behalf. A federal hate crimes investigation is also ongoing.

Chou had worked as a security guard in Las Vegas, authorities said.

There was no immediate word on why Chou chose to target the church in Laguna Woods, a scenic coastal area whose population mainly consists of retirees and is near a large gated community.

Barnes said the motive for the shooting was Chou’s hatred toward Taiwan that was documented in handwritten notes that authorities found. Chou’s family apparently was among many forcibly removed from mainland China to Taiwan sometime after 1948, Orange County District Attorney Todd Spitzer said.

Relations between mainlanders forced to flee a Communist takeover and native Taiwanese were frequently tense as the new arrivals crowded into slums and military communities. Separated by language and lifestyle, bullying and confrontation were frequent as President Chiang Kai-shek tightly restricted civil liberties under nearly four decades of martial law.

The Presbyterian Church is the most prominent of the Christian dominations in Taiwan and was closely identified with the pro-democracy movement during the martial law era and later with the Taiwan independence cause.

Barnes referred to Chou as an immigrant from China but Taiwan’s Central News Agency says it interviewed Louis M. Huang, director general of the Taipei Economic and Cultural Office in Los Angeles, and he confirmed that Chou was born in Taiwan in 1953.

Barnes said Chou acted alone and was “not believed to be associated with any specific church or any religion, and there’s no direct connection to the church or any member of the church that we’re aware of."

Balmore Orellana, a former neighbor, said Chou’s life unraveled after his wife left him last year. Before, Chou had been a pleasant man who used to own the Las Vegas apartment building where he lived until being evicted in February, Orellana told The Associated Press.

Records showed the four-unit property was sold last October for a little more than $500,000. Orellana said Chou’s wife used the money from the sale to move to Taiwan.

Before Orellana moved in about five years ago, Chou received a head injury and other serious injuries in an attack by a tenant, the neighbor said. More recently his mental health declined and last summer a gun was fired inside Chou’s apartment and the bullet entered Orellana’s apartment, although nobody was hurt, Orellana said.

Police reports about the assault and the shooting were not immediately available Monday.

Tensions between China and Taiwan are at the highest in decades, with Beijing stepping up its military harassment by flying fighter jets toward the self-governing island. China has not ruled out force to reunify with Taiwan, which split from the mainland during a civil war in 1949.

Taiwan’s chief representative in the U.S., Bi-khim Hsiao, offered condolences to the shooting families on Twitter.

“I join the families of the victims and Taiwanese American communities in grief and pray for the speedy recovery of the wounded survivors,” Hsiao wrote on Sunday.

Chinese Embassy spokesperson Liu Pengyu told the AP via email that the Chinese government has “consistently condemned incidents of violence. We express our condolences to the victims and sincere sympathy to the bereaved families and the injured.”

Those wounded by gunshots included an 86-year-old woman as well as four men, ages 66, 75, 82 and 92, the sheriff’s department said. Authorities on Monday said two of the wounded were in good condition, two were in stable condition and the status of the fifth patient was undetermined.

Jerry Chen, a longtime member of the church, said a group of about 40 congregants had gathered in the fellowship hall for a luncheon after a morning service to welcome their former Pastor Billy Chang, a beloved and respected community member who had served the church for 20 years. Chang moved back to Taiwan two years ago. This was his first time back stateside, Chen said.

Everyone had just finished lunch and were taking photos with Chang when Chen went into the kitchen. That’s when he heard the gunshots.

Barnes said Cheng, a sports medicine doctor who is survived by a wife and two children, charged at the shooter and attempted to disarm him, allowing others to intervene. Chang hit the gunman on the head with a chair before other parishioners subdued him.

“I will tell you that evil was in that church,” Spitzer said, who added that Chou had “an absolute bias” against Taiwan and its people.

The shooting came a day after an 18-year-old man shot and killed 10 people at a supermarket in Buffalo, New York, in a racist rampage where the white gunman allegedly targeted a supermarket in a predominantly black neighborhood.