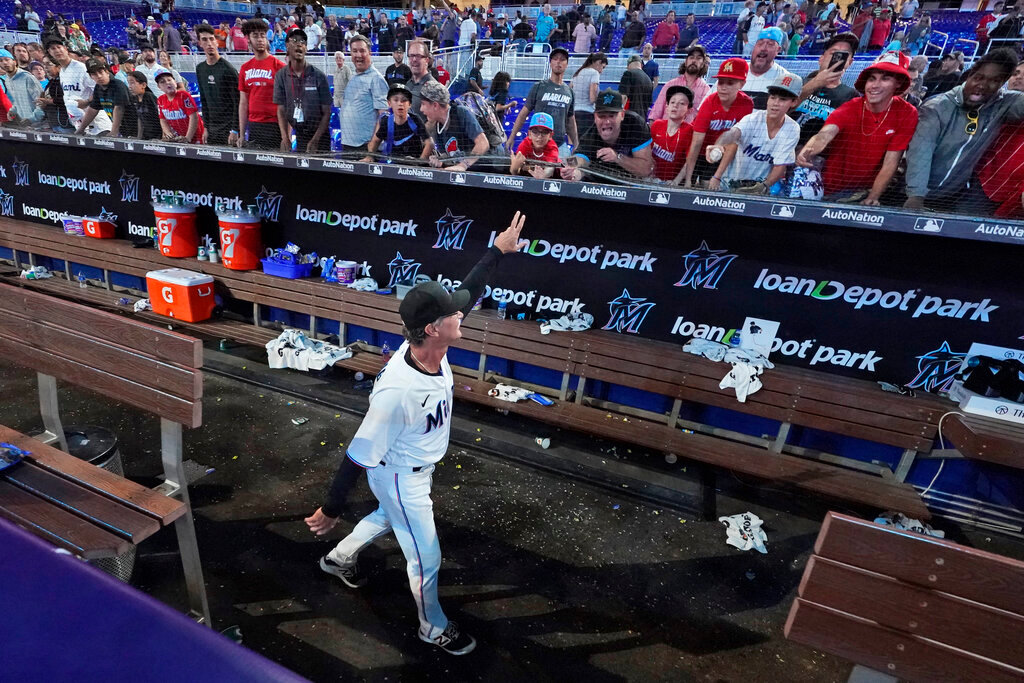 Miami Marlins manager Don Mattingly waves to the crowd after a game against the Atlanta Braves, Wednesday, Oct. 5, 2022, in Miami. (AP Photo/Wilfredo Lee) 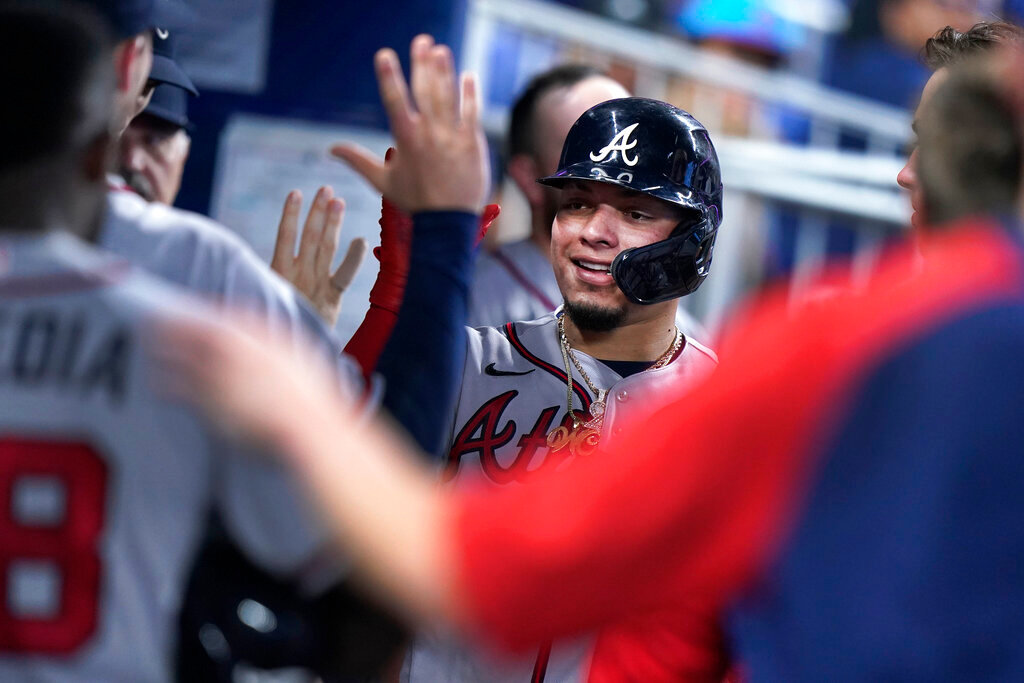 Atlanta Braves' William Contreras is congratulated by teammates after he scored on a single by Eddie Rosario during the fourth inning against the Miami Marlins, Wednesday, Oct. 5, 2022, in Miami. (AP Photo/Wilfredo Lee) 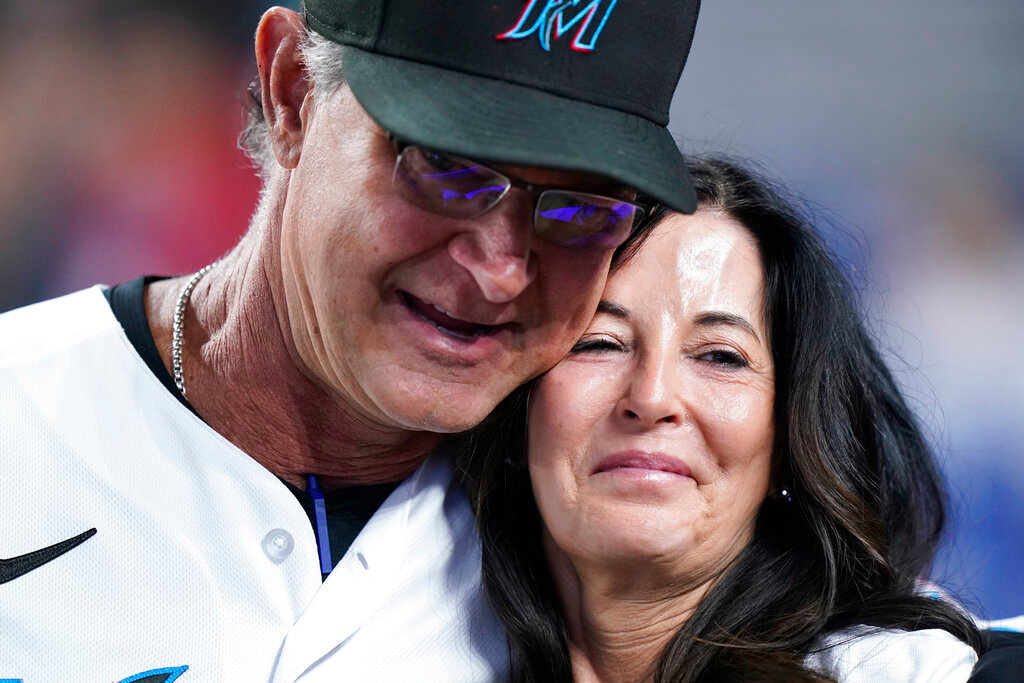 Miami Marlins manager Don Mattingly hugs his wife Lori Mattingly as he is recognized on the field during the fifth inning against the Atlanta Braves, Wednesday, Oct. 5, 2022, in Miami. (AP Photo/Wilfredo Lee)
Previous Next
Posted Thursday, October 6, 2022 9:37 am

MIAMI (AP) — Don Mattingly went out as a winner in his final game as Miami’s manager when rookie Peyton Burdick homered and drove in four runs to lead the Marlins over the NL East champion Atlanta Braves 12-9 on Wednesday.

Matt Olson hit his 34th homer and Marcell Ozuna hit his 23rd for the Braves, who finished 101-61 and have a bye into the Division Series next week. The defending World Series champions won the season series against Miami 13-6.

The 61-year-old Mattingly announced Sept. 25 that he would not seek a new contract. Miami’s final 69-93 record, fourth in the NL East, surpassed its 2021 finish by two games.

“I think this thing very easily could turn very quickly,” Mattingly said. “You see the makings of it. Obviously with our pitching staff, it gives you a huge chance. We were in so many close games this year.”

Mattingly finished his Marlins tenure 443-587, highlighted by a playoff berth in the 2020 pandemic-shortened season. It was Mattingly’s only winning year in seven seasons with the club.

“It feels good to be a part of this,” Mattingly said. “It’s the end of what I’m doing right now in this position. I don’t know what’s going to happen and what door opens or what road I take.”

Continuing a final-game custom during his years in Miami, Mattingly allowed a veteran player to manage the team. Catcher Jacob Stallings ran the Marlins Wednesday with Mattingly available for advice.

“We were going through all the scenarios in the dugout, it was obviously stressful pitching-wise,” Stallings said. “But it was fun. Stressful but fun.”

After they clinched their fifth consecutive division title Tuesday, the Braves fielded a lineup without several of their top players.

All-Stars Ronald Acuña Jr. and Austin Riley and NL Rookie of the Year contender Michael Harris II rested. Shortstop Dansby Swanson grounded out to lead off the game and was replaced by rookie Vaughn Grissom in the bottom of the first.

“I’m so proud of the group, how they hung in there,” Braves manager Brian Snitker said. “Everybody withstands adversity in this sport. It’s how some teams handle it and come out of it, and these guys did. It’s a really impressive group.”

Olson’s two-run drive off Andrew Nardi (1-1) in the seventh got Atlanta within 10-8 before Burdick connected with a two-run homer in the bottom half.

“It was definitely a good way to go out,” Burdick said. “It’s been a great year learning from Donnie, one of the best players to ever do it.”

In addition to his first three-hit game, Burdick robbed Olson of an extra-base hit with his leaping catch at the wall in the fourth.

“I’m just glad we won and send Donnie out on a good note,” Burdick said.

Dylan Floro inherited two runners with one out in the ninth and walked Robbie Grossman and allowed Guillermo Heredia’s RBI single. Ehire Adrianza lined out to left before Floro struck out Grissom in a 13-pitch at-bat for his 10th save.

Ozuna’s three-run homer in the sixth put Atlanta ahead 6-5. He drove reliever Bryan Hoeing’s sinker over the wall in left.

Jackson Stephens worked the first three innings for the Braves. The right-hander gave up three runs on five hits and two walks.

Marlins starter Elieser Hernández was lifted after four innings. He allowed three runs and four hits and struck out three.