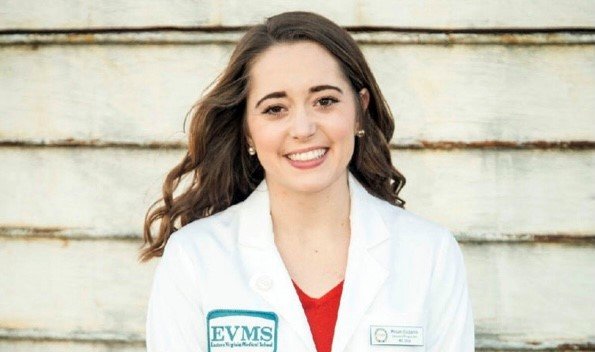 NEW ORLEANS (BP) – After spending time this summer volunteering at the Baptist Friendship House in New Orleans, medical school student Megan Duggins knew she had to take a proactive approach to the issue of human trafficking.

Currently a student at Eastern Virginia Medical School, Duggins spent multiple days a week volunteering with the Friendship House this summer and assisted with caring for survivors of trafficking. She soon realized her training was lacking.

“It was very glaring to me that I wasn’t necessarily the best prepared to adequately respond to the situation,” Duggins said. “It showed me the level of care we need to provide for those victims, and it just really put two questions in my head: How am I as a future physician and my colleagues preparing to respond to these really delicate situations, and what can I do about it?”

Duggins started From Red Flags to Freedom, a non-profit whose purpose is to “educate and empower future health care providers to identify the red flags of human trafficking and how to care for victims with dignity.”

All of the paperwork and non-profit tax information was filled out by Duggins herself, and she assembled the board of advisors (made up of counselors, physicians, ministry workers and government leaders) through networking. She had it completed within two months of her time with the Friendship House.

Duggins serves as the president of From Red Flags to Freedom and said the first goal is to create a training program, complete with videos and assessments, for future or current health care providers. The organization’s leaders will begin meeting this week to plan out the first training curriculum with a plan to launch early next year.

Duggins said health care professionals are not completely unequipped to handle situations involving trafficking, but hopes that additional training will help rising physicians feel more confident in dealing with situations when they arise.

“It’s better to be overprepared and know how to respond, than to say it’s never going to happen to you and deal with it poorly,” Duggins said.

After initially resisting the call to From Red Flags to Freedom, she said her faith compelled her to take action.

“I didn’t want to initially do it and it was kind of scary, and I thought that I was just a medical school student so what do they care what I have to say,” Duggins said. “But I don’t think it was a mistake that this need kind of came into my thought process. I’m really just trying to be faithful to the fact that I see a need and I want to meet a need with a level of integrity and care.

“I’m learning as I’m going. I’m not the expert, but if I can be the person that brings the experts to my fellow students then that’s what my role is supposed to be.”

Bennett is also a Send Relief missionary and helps the Friendship House partner in ministry with Southern Baptist entities such as the North American Mission Board (often through its Send Relief Center in New Orleans) and the Woman’s Missionary Union (often through on-site training relating to trafficking).

Bennett said Southern Baptists have a huge role to play in the prevention of trafficking in their local area.

“If we as Southern Baptists could become educated about human trafficking so that we can take preventative measures, such as reaching out to people that are vulnerable, maybe living in poverty, folks that are experiencing homelessness, or folks that are just vulnerable because of abuse or things like they may have experienced,” Bennett said, “if we can be preventative in those ways then we can help to stop human trafficking.”

Duggins said Bennett noticed signs regarding human trafficking situations that she was not able to pick up on, which is one reason she asked Bennett to serve on the advisory board of From Red Flags to Freedom.

Duggins said the fact that every person is loved by God is what drove her to begin praying about human trafficking and then ultimately, to becoming part of the solution.

“When you pray bold prayers, don’t be surprised when God gives bold answers and be prepared to do something,” Duggins said. “Don’t pray big and then not respond, because that’s a lack of faith. Delayed obedience is still disobedience. It’s one thing to pray but another to take practical steps of obedience.

“God made every person with intrinsic value and loves everyone without partiality. That should transform how we view each and every person, and the things that would break Jesus’ heart should break ours.”