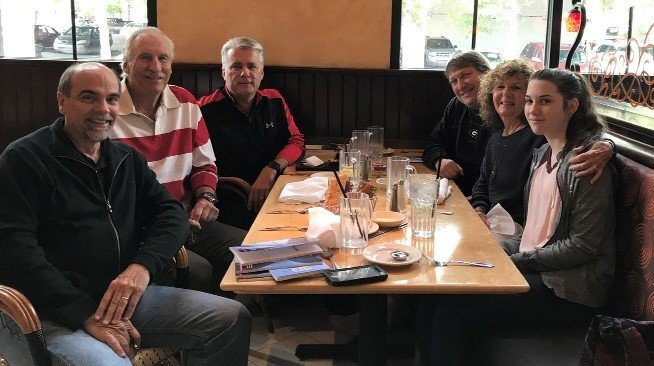 Friends who planned a getaway to New York to watch a Yankees' game found themselves in the midst of a tragic saga.

Although it has been 20 years, memories of the Sept. 11, 2001, terrorist attacks on America continue to strengthen the faith and influence the lives of three Georgia men.

Ty Wheeler, Ken Harriss, and Todd Trainer, all members of First Baptist Church in Woodstock at the time, shared a love for baseball and traveled to New York City to see the New York Yankees play the Boston Red Sox at Yankee Stadium on Sept. 10, 2001. The trip, for the three baseball fans, was a “’bucket list’ type event,” the men wrote in the book Dawn's Early Light, which chronicles their 9/11 experience.

At the stadium, the men grabbed “the obligatory pregame ballpark food” of peanuts, hotdogs and soft drinks. As they made their way to their seats, raindrops began to fall. Their enthusiasm for their baseball adventure soon turned into drenched disappointment as a deluge of rain forced the game’s postponement.

One disappointment was met soon with another. The men, who were looking forward to their next day of sightseeing in New York City, discovered that flying stand-by meant that they would have to head home a day earlier than expected.

As their flight pushed back from the gate on the morning of Sept. 11, 2001, the plane suddenly stopped. The captain informed passengers that their flight would be returning to the gate because a plane had flown into one of the towers at the World Trade Center, exactly where the men had hoped to be having breakfast that morning.

In the airport, before smartphones were as readily accessible as they are today, the men had little information about what was occurring in the nation … until Trainer received a phone call from his father. The father’s words were somber and startling, “Son, we’re at war.”

All flights were grounded, and a “calm” evacuation of the airport was ordered. Once outside, the three Georgians anxiously looked for a taxi. A woman offered to share her cab, and the men accepted. As they climbed into the taxi with their new friend, a loudspeaker announcement blared that their taxi was the last one available at LaGuardia.

With nowhere else to go, the men recall that Lauren Mishkin, their “tiny hero” who had shared her cab, also offered to share her home in the Bronx with them, where they met her husband, Michael Mishkin. There, with access to news, “We … began to realize the gravity of our situation and just how different this day could have been—and very nearly was—for us. We are keenly aware of God’s presence, protection, and provision at this moment,” they wrote. At Mishkin’s home, the men cried, prayed, and talked.

Two days later, on Sept. 13, 2001, they were able to board a train to Richmond, Virginia. There, they were greeted by Trainer’s father, who drove them home to Woodstock.

Although the Woodstock men made their way home, they are keenly aware of the many people who “gave everything that day and never made it home. We are … reminded that their friends and family members still grieve openly, and with new pain, when recounting that horrible day. Our hearts ache with them, and we ask God for healing in their lives,” they wrote.

In May 2002, the men returned to New York City, attended a Yankees game and visited the site where the twin towers once stood. There, in the huge crater littered with debris, they wrote that they saw “the symbol of all that keeps and sustains us, even today. The one thing that makes life worth living and the symbolic reason we will have everlasting life. The twenty-foot piece of two intersecting steel beams. The steel beams in the shape of a cross.”

The men, along with their families, also returned to New York City in the summer of 2016 with their church choir to sing at Carnegie Hall.

“Yes, we did go to the 9/11 Museum,” said Ty Wheeler, still a member of First Baptist Church in Woodstock. The experience, he said, was “very somber and moving.”

‘A future and a hope’

Even today, 20 years later, the men view their lives and experiences through the lens of 9/11. Although much has changed, the three men still stay in touch and call each other every 9/11.

“Looking back 20 years, several things stand out in my mind,” said Wheeler, who has a daughter, now a high school junior, who was not born in 2001.

On 9/11, for the three friends, God “proved His presence … displayed His providence … granted protection … poured out His provision,” they wrote.

That experience carries over to today’s unsettled world.

“Our own country has seemingly been transformed from the patriotic unity of 2001 to the social-media driven divisive and fractured culture of today.

“Despite our world’s ups and downs, we still have a future and a hope, and that’s our Lord Jesus Christ. That’s the one thing that’s never changed for Todd, Ken, and me. He saved our souls from sin and death forever, just as He saved our lives on that fateful day in New York City. Both of these life-changing events are something we can never forget,” he said.

As people look for answers to the world’s many problems, such as racial strife, international wars and the pandemic, Wheeler firmly believes, “Jesus is who He said He is, still is in control, still is on His throne, and still is our only Hope. Once He is the Lord of our lives, then and only then will our world find the love and peace that only He can give.”