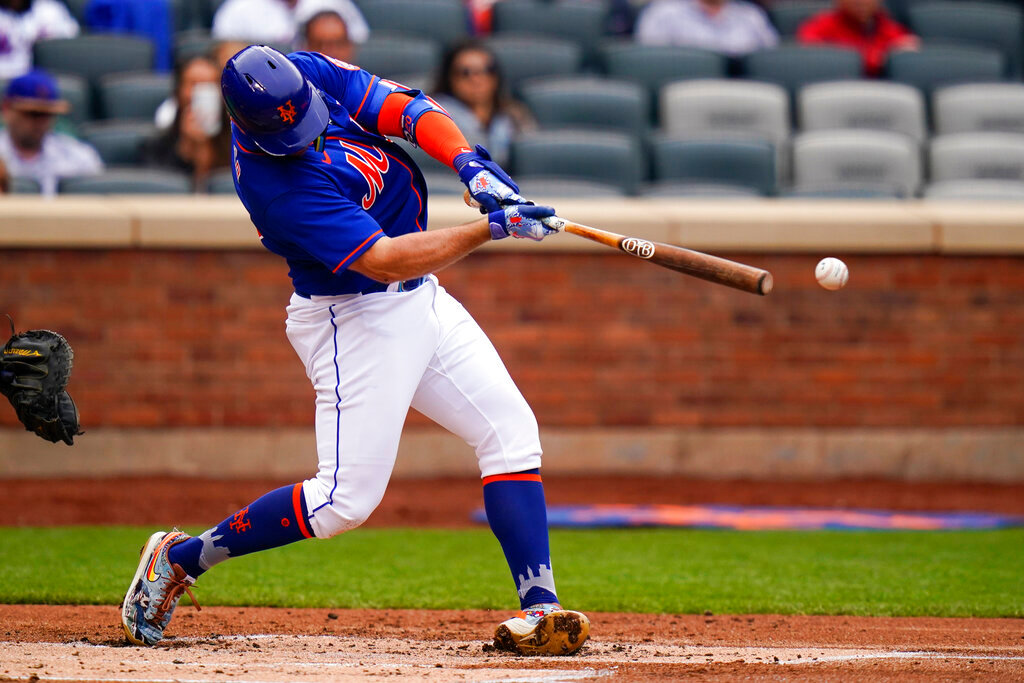 New York Mets' Pete Alonso hits an RBI single against the Atlanta Braves in the first game of a doubleheader, Tuesday, May 3, 2022, in New York. (AP Photo/Frank Franklin II) 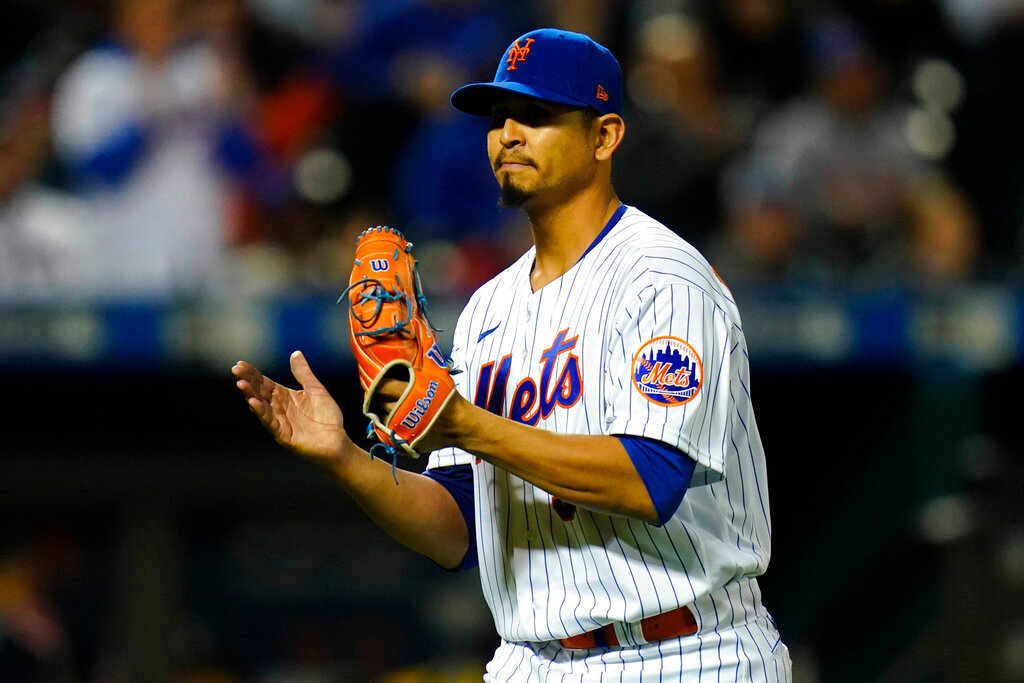 New York Mets starting pitcher Carlos Carrasco celebrates during the seventh inning in the second game of the team's doubleheader against the Atlanta Braves on Tuesday, May 3, 2022, in New York. (AP Photo/Frank Franklin II) 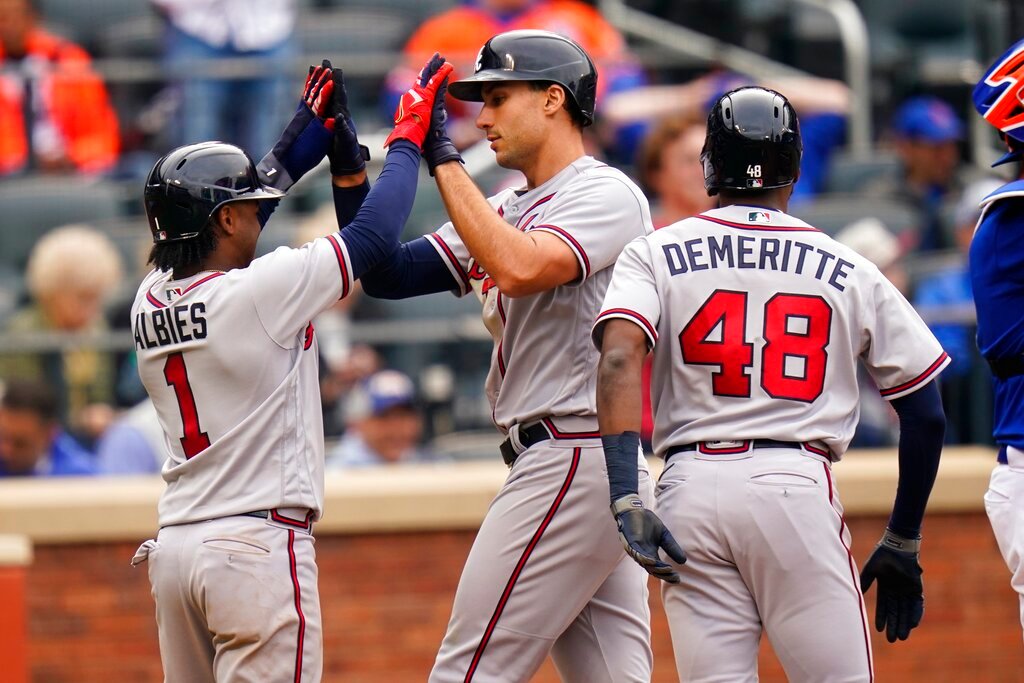 Atlanta Braves' Matt Olson, center, celebrates with Ozzie Albies, left, and Travis Demeritte, right, after Olson hit a three-run home run during the fifth inning in the first game of a doubleheader against the New York Mets, Tuesday, May 3, 2022, in New York. (AP Photo/Frank Franklin II) 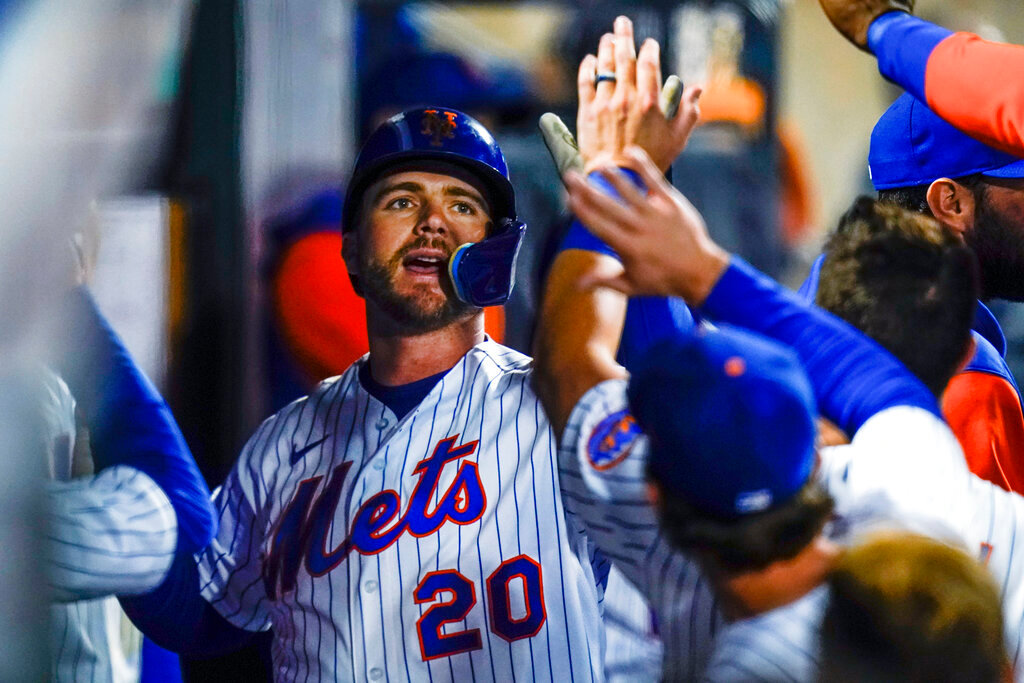 New York Mets' Pete Alonso celebrates with teammates after hitting a home run during the sixth inning in the second game of a doubleheader against the Atlanta Braves Tuesday, May 3, 2022, in New York. (AP Photo/Frank Franklin II) 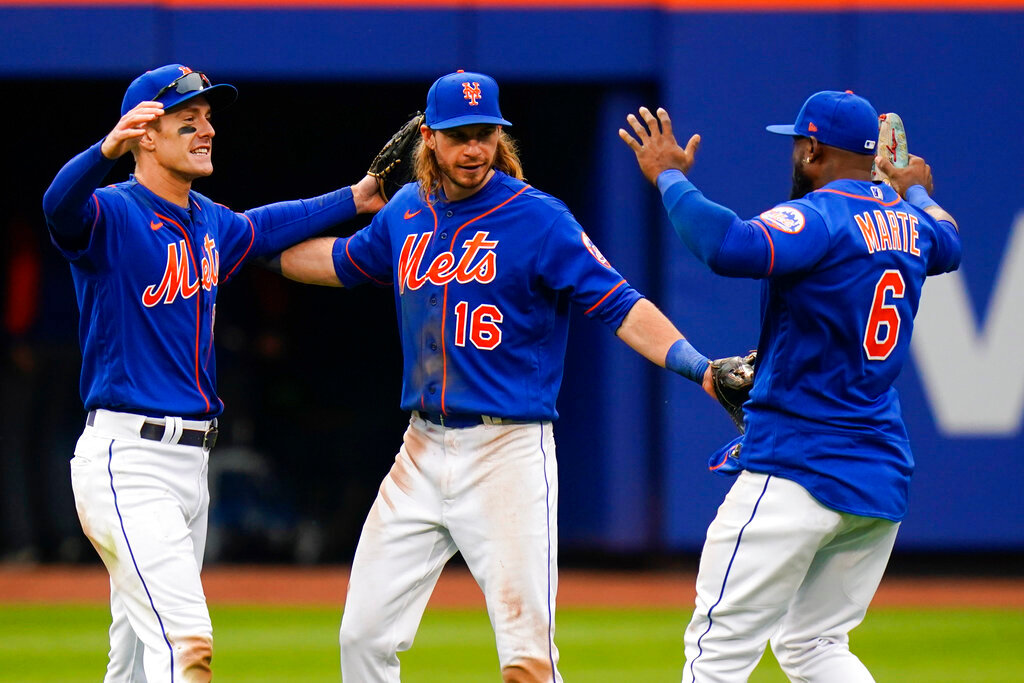 New York Mets players, from left, Mark Canha, Travis Jankowski and Starling Marte celebrate after defeating the Atlanta Braves in the the first game of a doubleheader, Tuesday, May 3, 2022, in New York. The Mets won 5-4. (AP Photo/Frank Franklin II) 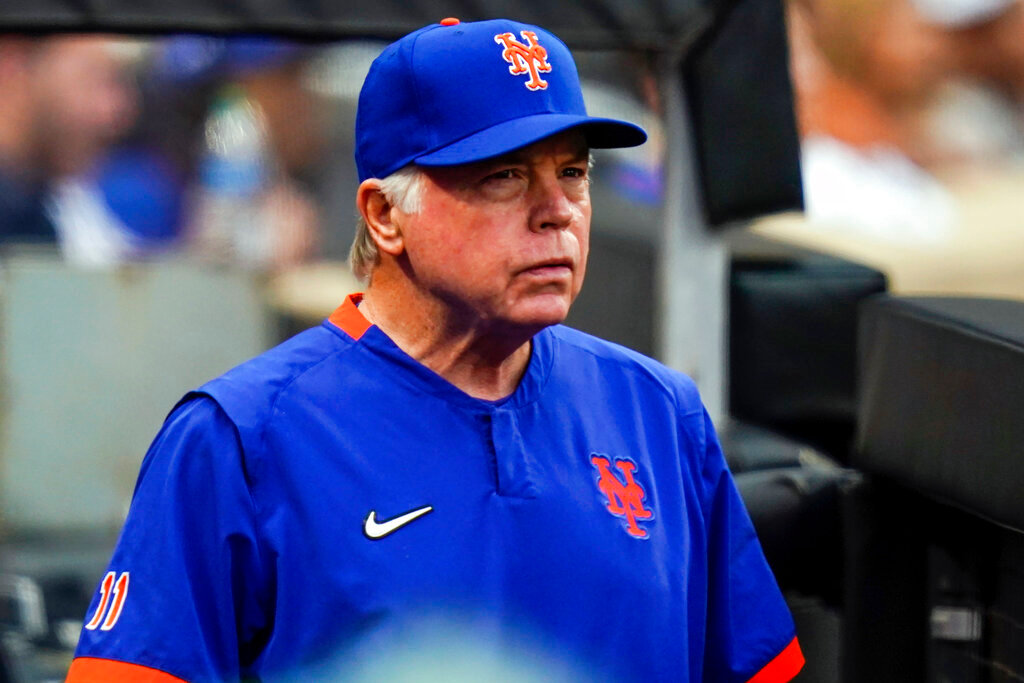 New York Mets manager Buck Showalter watches his team play during the eighth inning in the first game of a doubleheader against the Atlanta Braves Tuesday, May 3, 2022, in New York. (AP Photo/Frank Franklin II)
Previous Next
Posted Tuesday, May 3, 2022 10:28 pm
By JAKE SEINER, Associated Press

Everything seems to be working out as hoped for the first-place Mets.

Carrasco dodged trouble for eight innings, Pete Alonso homered against Kyle Wright on an off night for Atlanta's breakout right-hander and New York beat the Braves 3-0 Tuesday night to complete a doubleheader sweep.

Alonso had two RBI singles in the opener as the Mets pounced early against Charlie Morton, and New York's bullpen closed out a five-hitter to beat the Braves 5-4. Alonso had two hits in each game.

Carrasco (2-1) stranded seven runners with some masterful work out of the stretch, keeping Atlanta off the board despite six hits and two walks. He threw 96 pitches and struck out five, bouncing back after allowing eight runs in his previous start against St. Louis.

“It's a reminder of how good a pitcher he is,” Showalter said. “That's a tough lineup to go through.”

Dominic Smith hit a two-run double against Wright (3-1) in the first, building off a four-hit game Sunday that may have preserved his spot when rosters shrunk from 28 to 26 on Monday.

Alonso went the other way for a solo drive in the sixth, his fifth homer.

A first-round pick in 2017, Wright came into Tuesday appearing to have finally corralled his immense talent with a 1.13 ERA through four starts. He took a step back at Citi Field, allowing season highs of three runs and nine hits while striking out a season-low three.

“The key is just making him come in the zone,” Alonso said, “because he has a lot of stuff that looks like a strike, and he does a really good job living on the edges.”

Seth Lugo closed out the shutout for his second save.

Braves star Ronald Acuña Jr. sat out the first game and hit leadoff in the nightcap as Atlanta slowly works him up to speed in his return from a torn right ACL. He doubled to start the game and also had a walk.

Matt Olson had two hits for Atlanta in the late game after homering in the opener.

Four of the Mets' first five batters reached against Morton, with the Mets taking a 2-0 lead on RBI singles by Alonso and Eduardo Escobar. Alonso added another run-scoring single during New York’s two-run second inning.

Olson hit a three-run homer in the fifth against starter David Peterson (1-0), his third of the season, to pull Atlanta within 5-4.

Edwin Díaz pitched the ninth for his fifth save.

Snitker left Acuña on the bench in the ninth inning, when the bottom of Atlanta's order faced Díaz. He said after that Acuña won't be available for pinch-hitting.

“He ain’t playing when he don’t start,” Snitker said.

Mets pitcher Max Scherzer was ejected during the sixth inning of the nightcap for arguing balls and strikes with plate umpire Jeremy Riggs from the bench. Scherzer, who didn’t pitch in either game, shouted profanities at Riggs before storming off down the clubhouse tunnel.

“I don't want him doing it when he's pitching and not being able to continue,” Showalter said. “But he felt like something wasn't fair with Dom, and he said what I'm sure Dom wanted to say."

“I'm sure it won't be the last one Max gets this year,” he added.

The ejection came a day after plate umpire Chad Fairchild apologized on the field to Mets starter Chris Bassitt for missing a strike call. Bassitt also barked at Riggs on Tuesday night.

Fairchild appeared to gift Atlanta a run in Tuesday’s opener when he ruled from third base that Dansby Swanson’s double was fair, even though replays showed the ball skipping in the dirt just outside the bag. The play was not reviewable because it happened in front of Fairchild.