Michael survivor: "We are all hurting down here"

The missing steeple, which tore a nearly 8-foot-hole in the roof, only hints of the destruction inside the sanctuary. KEITH BOWEN/Special
Posted Monday, October 15, 2018 6:53 am
Joe Westbury

The missing steeple, which tore a nearly 8-foot-hole in the roof, only hints of the destruction inside the sanctuary.The gaping hole allowed rain and wind to enter the building, compounding the damage. The back brick wall collapsed in the storm. KEITH BOWEN/Special

DONALSONVILLE — At least two southwest Georgia Baptist churches emerged heavily damaged from the eye of Hurricane Michael as it ripped through the southwest part of the state on Wednesday night.

Reports from the two congregations are just emerging as cell phone towers are slowly rebuilt and stories begin to emerge from the rubble that litters the once peaceful farming communities. Rocky Ridge Baptist Church, west of Bainbridge, and Springfield Baptist Church in Jakin, both in Bowen Association, are uninhabitable and will be for sometime. 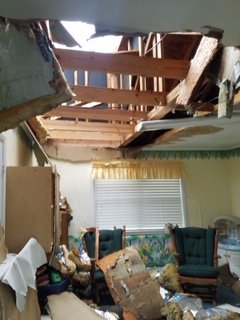 Fortunately there were no children in the nursery the night the storm hit, as services had been cancelled. KEITH BOWEN/Special

An insurance adjuster will be onsite Wednesday morning to survey the damage at Rocky Ridge, says deacon Keith Bowen. Rusty Bradley of the Springfield congregation was unable to be reached on Sunday evening but reports are that the church is even more heavily damaged. A story will be forthcoming when contact is made with Bradley.

“The building is severely damaged if not completely lost,” Bowen told The Index on Sunday evening, four days after the most powerful hurricane to hit the part of the state since 1898 brought a night of terror and destruction to the area.

“The wind on the east side of the eye, which is the most powerful, tore the steeple off the church and blew out six rafters on the back” of the half-century old building. “There’s just nothing there,” he added.

The wind, which approached 120 mph, collapsed the back brick wall, tossing bricks into the pastor’s study and nursery and two adjoining classrooms.

And this steeple, commonly the first structure to fail in extremely high winds, was no ordinary steeple. It was built to withstand just about anything … save a Category 5 hurricane whose name will most likely be retired by the Weather Service due to the broad path of destruction left behind, officials say.

“We had secured the steeple to the rafters with very large bolts to be sure it remained stable through just about any storm. It was the first thing I saw that was missing when I woke up on Thursday morning and looked at the church across the field from our home,” Bowen relates.

When he got closer through the destruction he noticed that not only was the steeple was laying on the ground but it tore a 6-to-8-foot hole in the sanctuary roof. 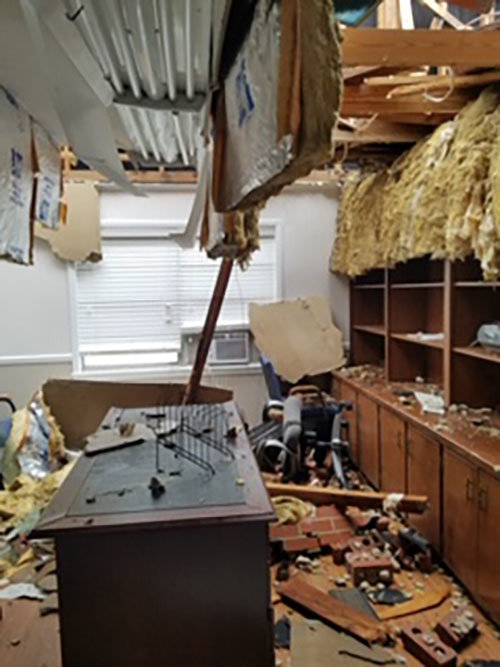 The pastor's study is littered with bricks and debris from the storm. Former pastor John Werner accepted a call to a church near Tifton two years ago; retired minister Scott Lord has been interim since that time. KEITH BOWEN/Special[/caption]

“If it had not been so securely anchored it would have just fallen into the parking lot. But it took a good chunk of the roof with it, allowing rain to pour into the building,” he continued.

It was “an awesome storm,” tearing shingles off all over the roof, especially on the east side. “Our sheetrock ceiling has absorbed so much water it could fall at any time. It’s already beginning to sag and has turned brown.”

There is little hope for immediate repairs to the structure, which is totally exposed to whatever weather will pass through in the coming weeks. The local rural power company is saying it could be 5 to 6 weeks before electricity will be restored as it rebuilds the entire grid from the power station to the last customer.

“No one is blaming them for such a slow recovery. Even if we could locate a carpenter he would have to bring his own generator to do the work.”

Bowen was raised in the church and accepted Christ as an 8-year-old in a revival in the building. He describes the congregation, which averages up to 50 on Sunday mornings, as "just a small country church." He is saddened by the destruction but is glad no lives were lost and worship services had been called off that Wednesday night due to the approaching terror.

“I have not gotten in touch with all of our members because cell towers are down and telephone service is so spotty ... it is virtually non-existent. I have heard that people whose homes are damaged are living with friends and neighbors. 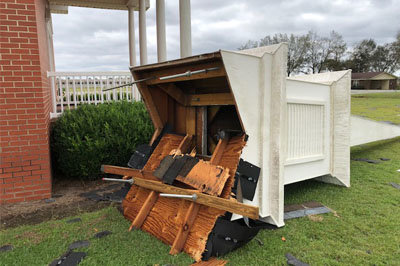 The massive bolts which secured the steeple to the roof provided little support in winds reaching 120 mph in the eye of the storm. KEITH BOWEN/Special

Bowen, who is part of the farming community and is in the only occupation he has ever known, is among those families whose financial wellbeing has been thrown into question.

“I don’t know anyone who is going to gather any cotton this year; we were just beginning to start the harvest. The fluffy cotton that had opened has been stripped from the plants and the few bolls that will open cannot be harvested because we can’t see the rows to get the machinery in the field. I can’t tell you if the rows run north or south or east or west.” 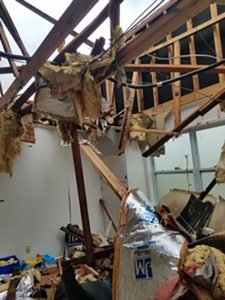 At least six rafters were ripped out of the sanctuary near the back of the church, exposing the interior to the wrath of the Category 5 hurricane. KEITH BOWEN/Special

There is little good news to be found in this corner of the state, save the fact that only one life – that of an 11-year-old girl outside of Bainbridge – is the only apparent death in the state. Bowen asked Georgia Baptists to remember residents in their time of struggle, adding ‘we really covet your prayers."

He is grateful and thanking God that he and his family emerged unscathed from the storm.

“I guarantee you that about 99 percent of all houses have damage of some kind. Either shingles torn from the roof resulting in water damage or trees or limbs down on homes or entire houses destroyed.

“We are all hurting down here.”