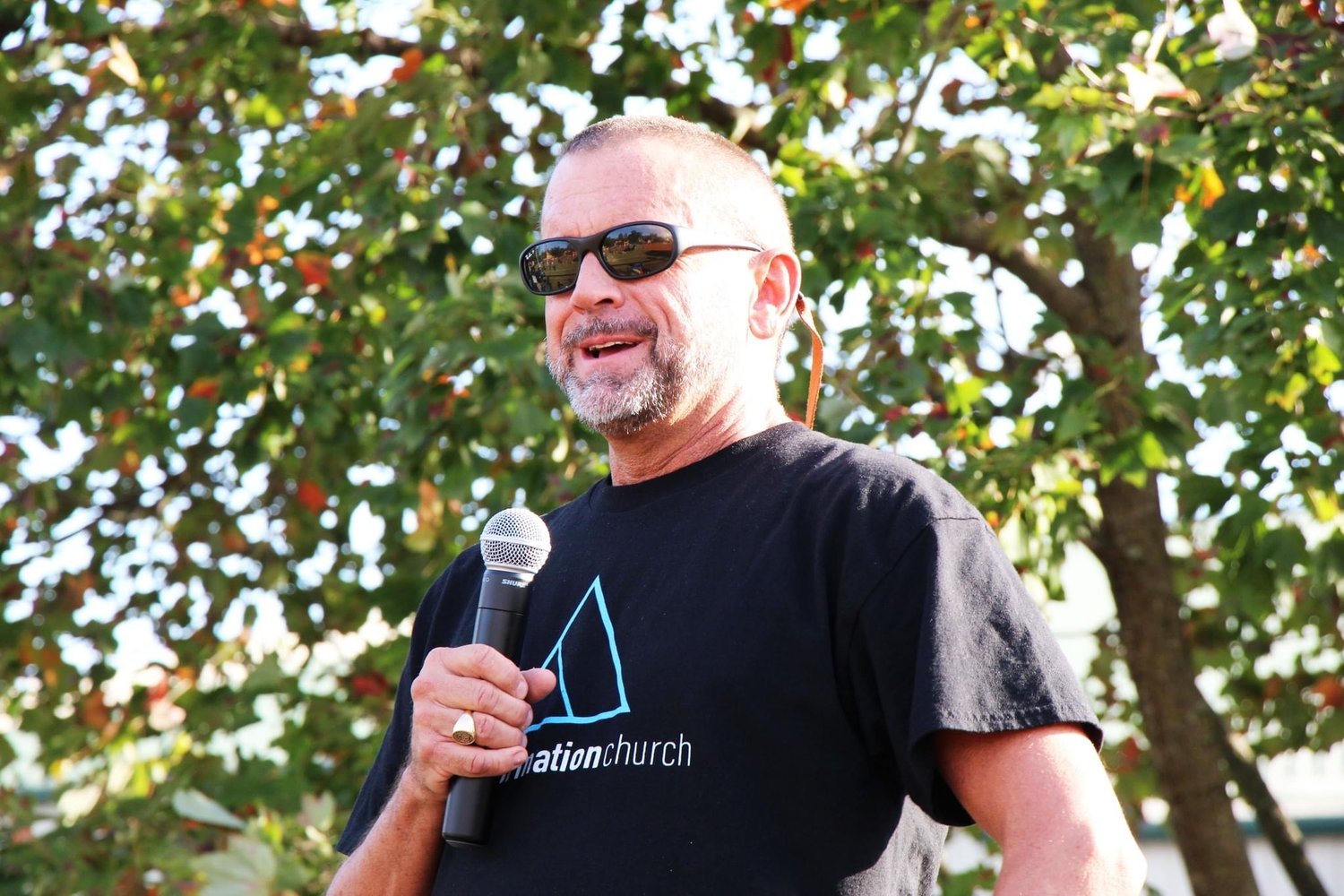 Pastor Mike Dorough addresses the large crowd that came for a block party in October.

Matt Gregory leads worship on the Sunday the church was constituted. 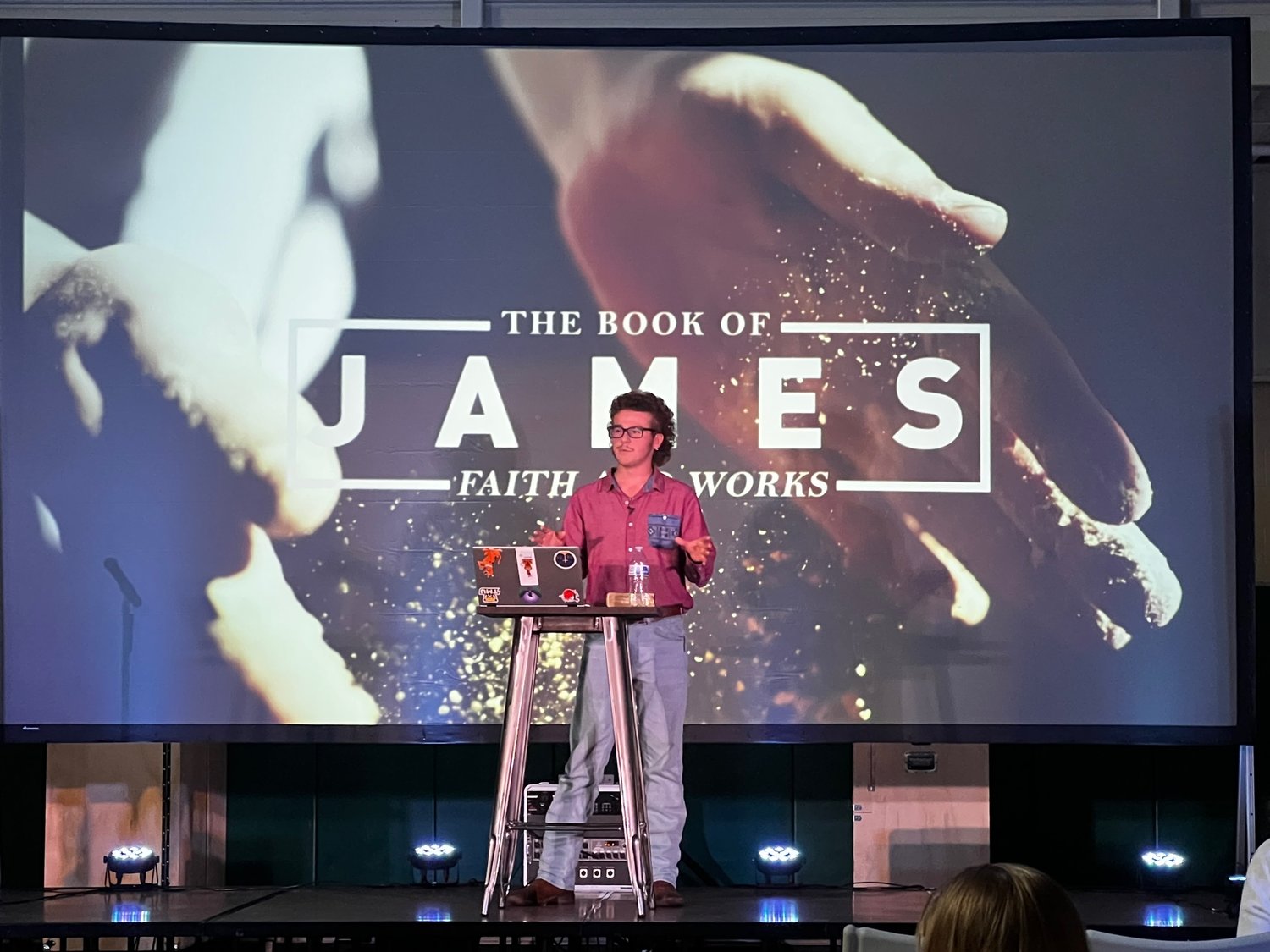 TMU student Blake Lee is currently preaching once a month on Sunday morning. 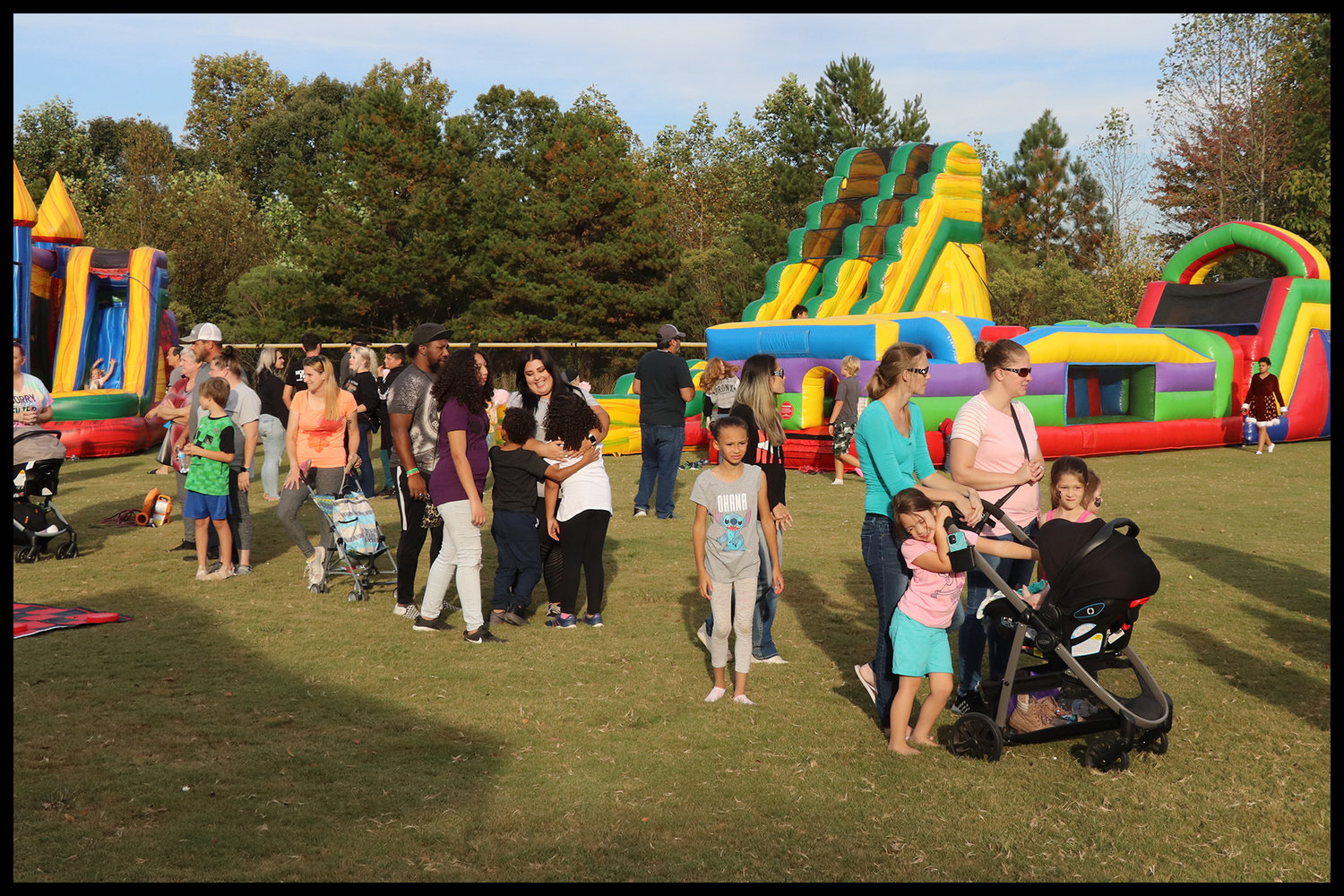 More than 500 people came to the block party designed to bless families and discover prospects for Transformation Church. 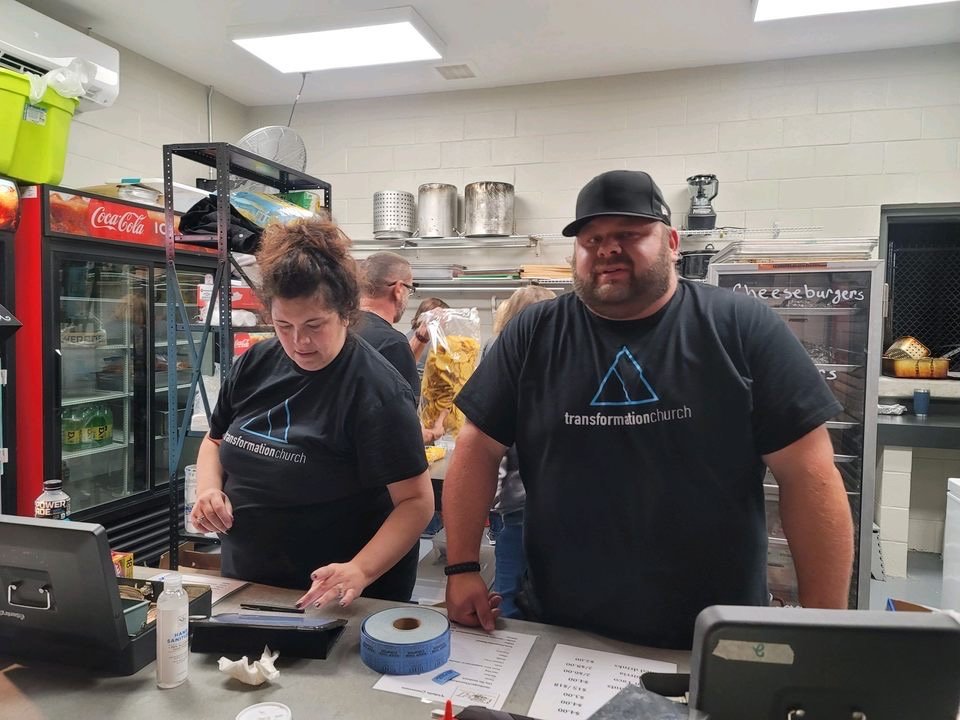 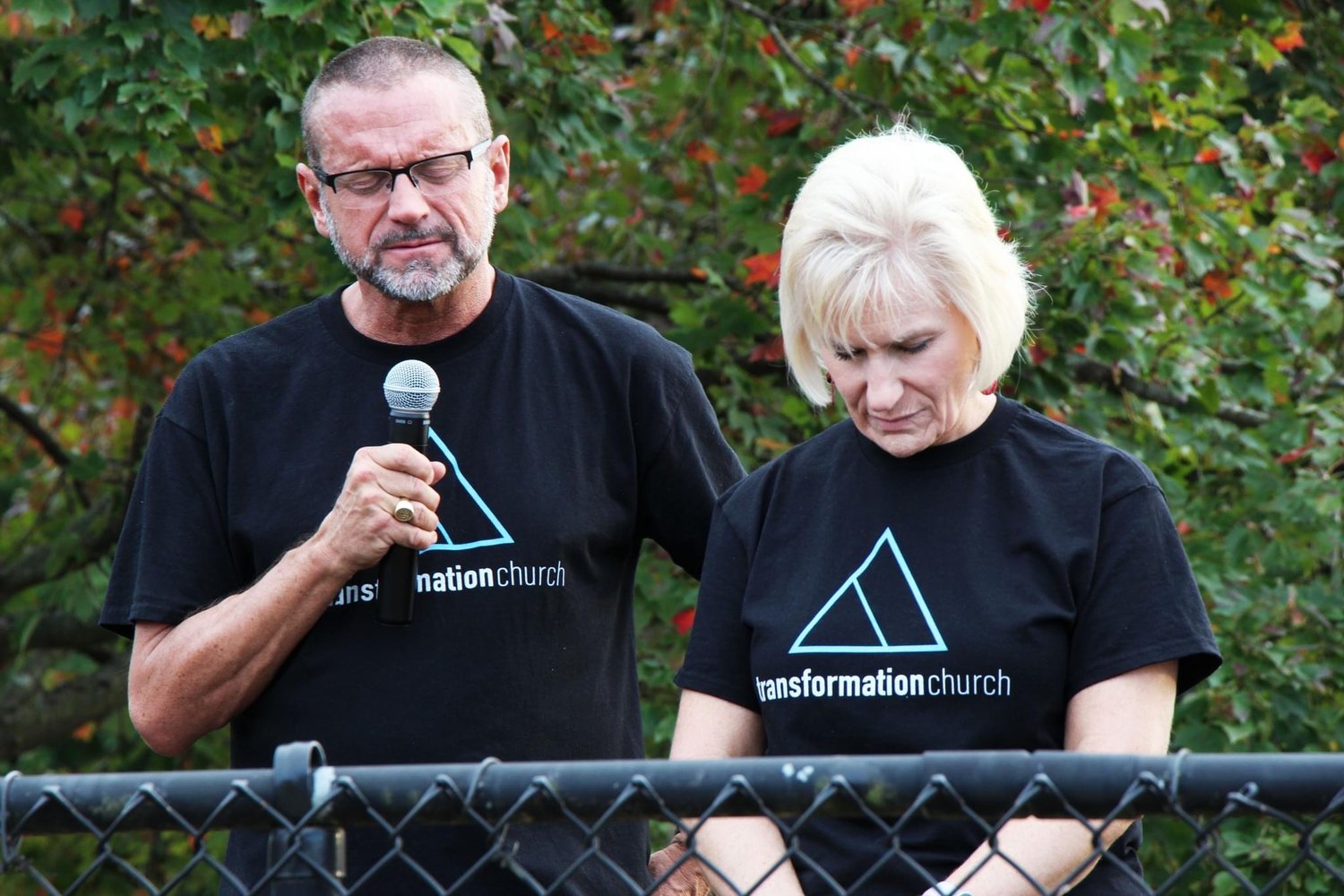 Mike and Julie Dorough have prayed fervently for God to bless their efforts in planting Transformation Church.
Previous Next
Posted Sunday, December 11, 2022 7:58 am
By J. GERALD HARRIS, The Christian Index

GAINESVILLE, GA – There is nothing quite as remarkable and wonderful as the birth of a child, but the pain a woman may have to endure in childbirth is often excruciating. In Galatians 4:19 the Apostle Paul speaks of the emotional and physical experience of suffering which typically precedes the celebration of the birth of a child.

Planting a church can obviously have its birth pangs and challenges, but few things on earth can be more rewarding than watching a church emerge from a dream and become a reality.

Mike Dorough, who has a rich history of ministry as a student pastor at Second Baptist Church in Warner Robins and as a pastor of two churches in the Gainesville area, and Matt Gregory, who served with Dorough as his worship leader at Air Line Baptist Church, have launched out into the deep to start a church in East Hall County.

Dorough testified, “Both of us had committed to serve Air Line for a long time, but on the same night, the Holy Spirit woke each of us up separately and gave us the very distinct word that it was time to launch out into a new work. There is no other answer than the distinct and unmistakable call of God.”

The new church planter continued, “We began to pray that others would share our vision and respond to God’s call to become part of a new work. It takes somebody with a first-century, missionary mindset to be willing to step away from the comfort of established churches to be pioneers with a Gospel heart to reach a culturally diverse and largely unreached area. Obviously, there are significant financial needs to plant a church. Satan is likely to unleash his heaviest artillery to thwart the beginning of a new work of God – all birth pains.”

Demographics reveal that the eastern section of Hall County is culturally diverse and economically depressed. Dorough indicated that many of the people in the area admit to feeling that they have always felt somewhat neglected. He stated, “There is a definite need here for a multi-generational, multi-cultural church where anyone can be transformed by the Gospel of Jesus Christ. Hall County has the largest concentration of Hispanic people in the state. We have worshipers of different ethnic backgrounds on any given Sunday.

“So, we felt a very distinct call to plant a church in this area, and specifically in the East Hall Community Center - the focal point of many activities. While we are having church, there may be baseball, basketball, cheerleading, self-defense, and other activities taking place at the center.  Currently, we have no desire for a building with large overhead costs. We believe we are exactly where God has called us to be.”

First, there was a lot of prayer that provided the undergirding for the step of faith. Dorough commented, “From our very first prayer meeting, we have asked God to make us multi-generational and multi-cultural. After that first prayer meeting had concluded, I realized that we had every decade represented from children to one precious lady in her 80s, who is now helping my wife in children’s church.

Students from Truett McConnell University were among the first to get involved. Dorough, who has served as a trustee and chairman of the trustees at TMU, remarked, “We want to be a sending station and a laboratory for people studying for vocational ministry.”

Dorough added, “While my wife, Julie, and I were college students at the University of Georgia, Prince Avenue Baptist Church in Athens poured into our lives. Pastor Bill Ricketts, College Pastor Doug Nix, and Student Pastor Barry Shettel discipled us and poured into our lives. They gave us opportunities to serve and to grow.

“After graduating from UGA, I attended seminary at Liberty Baptist Theological Seminary when Dr. Jerry Falwell, Sr was still alive. One of his burning passions was to raise up "young champions for Christ." That vision continues to burn in my heart as well.  From that time on, a hallmark of our ministry has been the desire to "pay it forward" and invest in future leaders.”

Dorough added, “By God’s grace we have students serving the Lord in churches across our country, and on the foreign mission field as pastors, missionaries, and church planters. We want to reproduce that model at Transformation Church.

“We spend a great deal of time on the Truett McConnell University campus ministering to and recruiting students. Julie currently serves on the Board of Trustees at TMU.   We are giving students opportunities to serve the Lord weekly. This church plant would not be possible without our university students.

“We desire to have a greater impact on the campuses of the University of North Georgia, Brenau University, and Lanier Technical College.  Another prayer of ours is that we will be able to launch another church within the first five years of existence. Perhaps some of these students will be the team that we send out. Because the population of Hall County is expected to triple in the next 30 years, we believe we must be about planting new churches.”

Nolan and Randall, both students at TMU, have been given opportunities to preach at Transformation Church; and the church is providing that training ground that will inevitably produce immeasurable benefits for the Kingdom of God.

As the dream began to take shape and new people were added to the initial group, September 11, 2022, was established as the day for Transformation Church to be constituted as a church plant from Second Baptist Church in Warner Robins. Dorough explained, “Executive Pastor and Senior Adult Pastor Gary Morton and deacon chairman Jack Nash represented Second Baptist that day. It was special day.”

With the generous help of New Bethel Baptist Church in Carnesville, GA, Transformation Church hosted a free community block party in October with inflatable games and slides, face painting, giveaways, hot dogs, drinks and much more. More than 550 largely unchurched prospects were discovered at the block party all of whom have been contacted since the event and some are now in attendance at Transformation Church each Sunday.

The official launch date originally set for January 15, 2023, has been delayed until February 26, 2023. Dorough explained, “Last last week Matt suggested that by delaying the special day for six weeks, it would give us time to raise the remainder of the needed funds and to recruit more laborers to cover all the ministries before the official launch. So, the new launch date is February 26th. Dorough exclaimed, “My heart leapt when I heard Matt’s suggested date, because that is my spiritual birthday. I was saved on Monday, February 26, 1979, in Cordele, Georgia at Morningside Baptist Church.

The Doroughs and Gregorys stepped away from full-time ministry and incomes to take a giant leap of faith, because they believed God is up to something in East Hall County. Follow the future of Transformation Church and you will see dreams become reality, sacrifices justly rewarded and birth pains that produce a celebration. The Lord may even lead you to invest in this church plant through your prayers or personal involvement.

Ministering to ministers: Retired homebuilder Gary Thrash is ‘that kind of friend’ to pastors