SAVANNAH – Wives of Georgia Baptist ministers heard a humorist, elected officers, and presented the Trudy Price Award to Brenda Cloud during their annual meeting on Nov. 15. The gathering was held at Calvary Baptist Temple as part of the Georgia Baptist Convention’s annual session.

State Missionary Mary Cox presided over the event which attracted 150 guests to the Tuesday luncheon. Inspirational speaker Joy Earle from Acworth entertained guests with her humorous approach to dealing with women’s issues ranging from dating to marriage to childbirth. Laughter punctuated her presentation as she gave personal accounts of trusting God through all the stages of life. 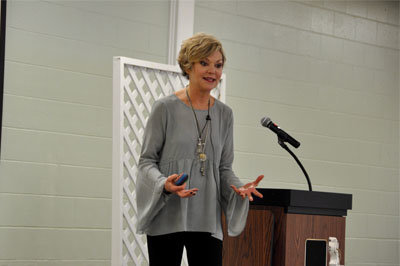 Earle speaks on a variety of topics ranging from “Life, Love, and Laughter” to “Who Am I and What Am I Doing.” Her website and additiona information is located at joyearle.com.

The Price Award is named in honor of wife of retired pastor Nelson Price of Roswell Street Baptist Church in Marietta. Price established herself as “a great example of serving alongside her husband in ministry for many years,” Cox noted in the presentation. Cox is wife of Frank Cox, pastor of North Metro First Baptist Church of Lawrenceville.

Brenda Cloud, who accepted the Price Award, is spouse of Ken Cloud, director of missions for Bowen Baptist Association in Bainbridge.

Brenda Cloud has faithfully served alongside her husband during his 56 years of ministry with 21 of those years in fulltime evangelism and has been present in more than 2,000 churches – 950 of them as revivals. 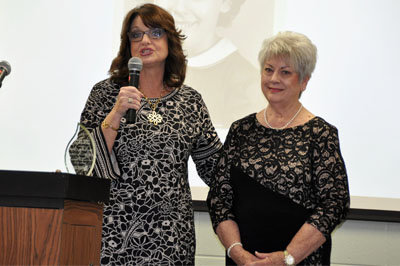 She has spoken in 39 states and six Canadian provinces and traveled as guest speaker for the School of Tomorrow (Christian Schools) on two tours, speaking in 35 states in three months. Among her many accomplishments is service as Woman’s Missionary Union/Women’s Director of Bowen Association for 9 years. She has also held an annual prayer retreat for women in the Association for the past 5 years.

She and Kenneth are parents of Gordon and Cameron, both of whom are in the pastorate. 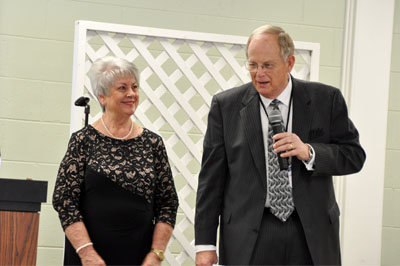 The Ministers’ Wives will hold their Winter Retreat on Jan. 26-28 at the Georgia Baptist Conference Center in Toccoa. The location will also host the Pastor/Deacon/Spouse Retreat on April 28-29.