Ministry born out of disaster: a tale of two churches in the wake of Hurricane Michael

Springfield members Jerry and Cheri Harrell have begun a generator ministry to bring power to water wells throughout the Jakin Community. JOE WESTBURY/Index

JAKIN — The scene outside Springfield Baptist Church Wednesday afternoon was very misleading compared with what the congregation had experienced exactly one week earlier.

The sky was partly cloudy and the scent of grilling hot dogs filled the air as the blue smoke passed over the couple dozen bags of buns, ready to be slathered with condiments. Folks sat around in folding chairs visiting while children helped assemble the main course under the watchful eye of adults. 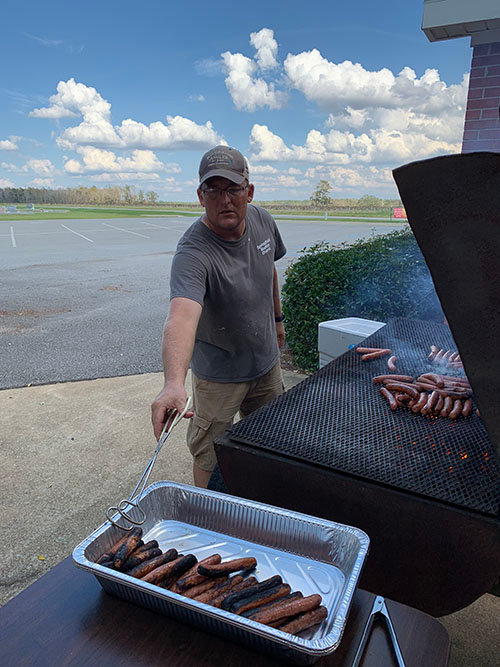 Zeth Smith, pastor of Springfield Baptist Church, cooks hot dogs for the church's outreach dinner for the Jakin Community. The Monday-Wednesday-Friday free feeding was launched days after the storm passed over the church on Oct. 10. JOE WESTBURY/Index

What looked like a typical Fall cookout was actually an offering to the community which was working to pull itself out from the ruin of the worst hurricane to invade the area in nearly a century. One week earlier, everyone present was huddled behind closed doors as sustained winds of 120 mph rearranged their community in the growing darkness.

When they emerged, they discovered wind had ripped a brick wall from the church, weakening the educational building; The front doors of the church had been blown open and wind and rain poured into the sanctuary. The steeple lay on the ground and a massive oak was sprawled across the children's playground.

As the cookout came to a close, four miles away as the crow flies, 16 members of Rocky Ridge Baptist Church in Donalsonville placed folding chairs on the front lawn in a surreal landscape of roofing shingles scattered beneath their feet, blue tarpaulin gently flapping in the wind, and a large steeple impaled in the ground behind them.

The tale of two churches was a tale of two groups of believers who were focused on meeting the needs of the community as well as those of their own membership.

Both churches were severely damaged in the storm with water logged sanctuaries, downed steeples and holes in roofs. Both were without power, and bricks from blown out walls littered the ground. And yet, both were looking beyond their needs, seeking to be a blessing to those less fortunate in the storm.

They were also focused on blessing those who came from beyond their world to help them restore order, remove trees from roads and homes, and most importantly -- bring electricity as they rebuilt the grid.

Within days of the storm’s passage Springfield members decided hosting the Monday-Wednesday-Friday meal was as effective a way as any to reach their neighbors. Early reports indicated that power would not be restored for weeks; families had no way to prepare meals, and all refrigerated food had been tossed out.

No electricity also meant no air conditioning in the sweltering 90-plus degree heat, and no power to pull water from the ground using their wells. That’s where Jerry and Cheri Harrell came up with the idea of using a donated generator to drive around and temporarily power water wells so families could take a bath, provide water if needed for farm animals, and store extra to flush toilets. 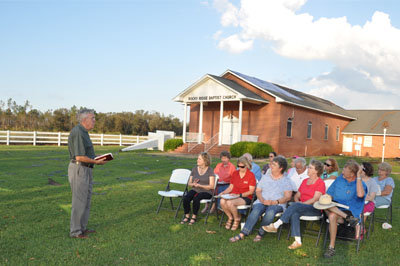 A week from the hour when Hurricane Michael was ripping through the Tri-State Area of Georgia, Florida, and Alabama, members of Rocky Ridge Baptist Church in Donalsonville gathered for their first Wednesday night service. Scott Lord from Climax is interim pastor. JOE WESTBURY/Index

Cheri Harrell’s nephew brought the generator from Covington, LA where he serves as minister of music at First Baptist Church. Having lived through several tropical storms and hurricanes, he knew how difficult life could be with no electricity.

The gift has been exactly what strangers across two state lines in southwest Georgia needed.

“We did not understand just how important of a ministry this was until Cheri and I began doing it,” Jerry Harrell said. ”It’s just a simple generator in the bed of our pickup but it has really brought some smiles to a few faces.”

“It makes you feel real good to know you are helping someone,” Cheri Harrell adds.

During the dinner, members also take food to people who they learn are unable to come to the church.

“You’d be surprised at the number of people who cannot get out because a large tree has crushed their car or truck and they have no transportation,” noted deacon chairman Rusty Bradley. The ministry was launched the first Monday after the storm and the congregation delivered more than 20 meals to the community and fed about 50.

“We plan to rotate what we provide and think we’ll have fish one night and possibly soup next Monday because the weather is expected to cool down … or at least we hope it will.” 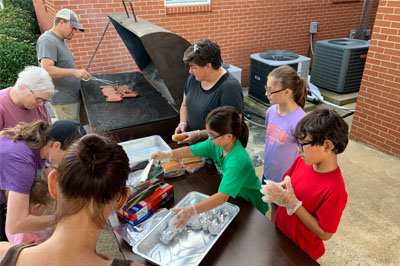 Groceries can be pretty hard to come by and it takes a lot of driving to find stores that are open … and if they are, the selection is pretty thin. Bradley said it took much longer than he expected just to find enough hot dog buns for the dinner.

On Wednesday evening a couple of members brought dinner to Carlos Aguilar and his wife, Nell, who is under hospice care. Driving into the yard it was easy to see how slow the recovery will be for some residents. A massive tree lay sprawled across the home and one car lay under a heavy limb.

But the husband and wife were grateful for the food delivered by the church.

Over at Rocky Ridge, interim pastor Scott Lord brought a load of perishables and MREs … Meals Ready to Eat, a staple of military food. He encouraged church members to take whatever they needed and to freely share with others who may be in need.

Jujuan and Keith Bowen came up with an idea to serve their community in appreciation of the first responders. The couple farm cotton and peanuts but also own a barbeque catering business. That's what led them to cook  8 Boston butts and deliver them, with all the fixings, to the Donalsonville Fire Department where the National Guard and other support groups are staged.

“The fire chief said all of the guys will work really hard if they have one good hot meal a day. This is our way of keeping them fed and nourished with the energy they need to restore some order to our lives,” Jujuan Bowen explained.

As the sun began to set and the few members sat in the folding chairs, Lord explained the importance of trusting God in such trying times. Lord was speaking in absence of Bowen Association Director of Missions Ken Cloud, who was expected to speak but had been hospitalized before the service began. 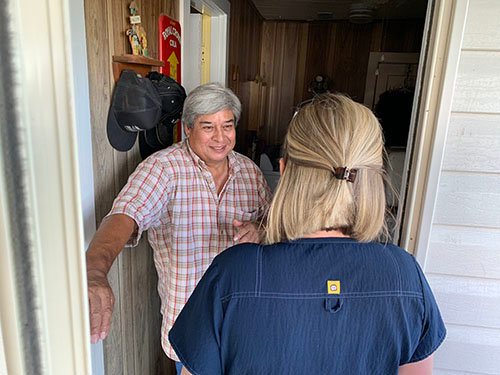 Carlos Aguilar is thankful for the delivery of food by members of Springfield Baptist Church. JOE WESTBURY/Index

Lord began by reading words of encouragement from Psalms and stressing the biblical teaching of relying on God in the most difficult of circumstances.

“The Psalmist recognizes that God is our sole source of refuge and strength. When we lose strength we lose hope but we do not need to depend on ourselves for strength.

As a small convey of Georgia Power trucks rolled behind him enroute to another set of powerlines to rebuild, Lord mentioned that he was grateful to the company for their work restoring power – but he thanks God for His restoring spiritual power that is used to restore our hope.

“For many, things look pretty desolate now; and there are times when God allows destruction that we do not understand. But nothing comes into our lives that is not filtered through the will of God.