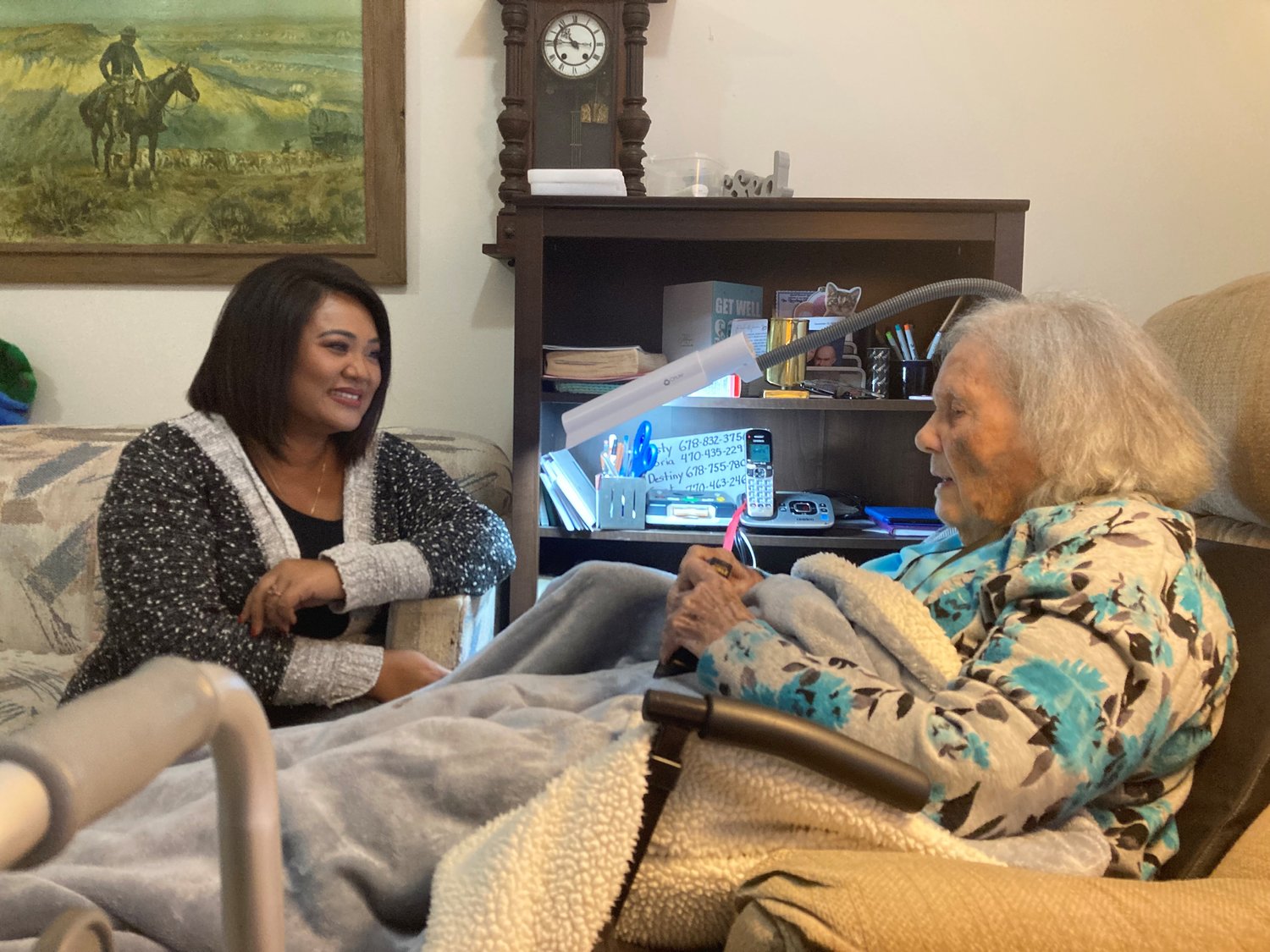 Sharalene Roper talks with 107-year-old Neva Peacock in her room at the Baptist Retirement Communities of Georgia. (Index/Roger Alford) 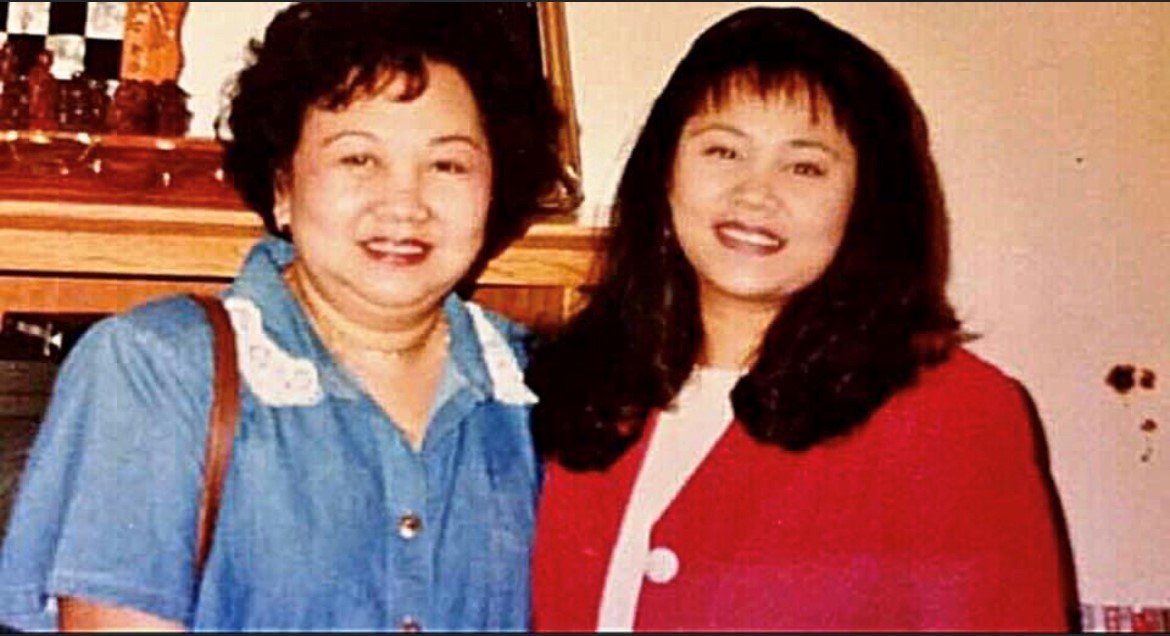 Sharlene Roper, right, is shown with her mother, Rosita Patanao, who became a Christian when Southern Baptist missionaries shared the gospel with her in the years after World War II. 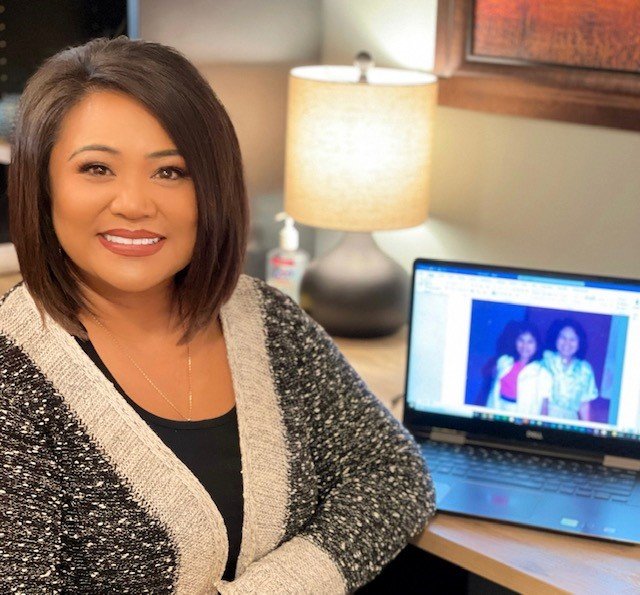 Sharlene Roper poses in her office with a computer in background showing photo of her and her mother.
Previous Next
Posted Friday, November 19, 2021 10:20 am

The names of the missionaries have long been forgotten, but their gospel presentation that day, like the proverbial pebble tossed into water, sent out ripples that are still impacting lives more than 70 years later.”
By ROGER ALFORD, The Christian Index

PALMETTO, Ga. – Tears escape from Sharalene Roper’s eyes and cascade down her cheeks.

They’re tears of joy, and they come naturally for a woman who is fulfilling God’s calling on her life to care for elderly residents at the Baptist Retirement Communities of Georgia.

It’s the soft words of 107-year-old Neva Peacock that triggers the waterworks.

“I love you,” Miss Neva tells Roper in a grandmotherly tone that reflects genuine affection. “You are always so kind to me.”

Roper, 48, wipes her face and tells Miss Neva she loves her, too.

The winding path that landed Roper in the role of chief operating officer at  Baptist Reitrement Communities actually began long before she was born, back when her mother, Rosita Patanao, was a child, back to an unexpected encounter she had with a couple of Southern Baptist missionaries serving in the Philippines in the  years following World War II.

The names of the missionaries have long been forgotten, but their gospel presentation that day, like the proverbial pebble tossed into water, sent out ripples that are still impacting lives more than 70 years later, including that of Roper and some 450 residents living in the Baptist Retirement Communities.

Patanao accepted Christ that day, grew up, got married, and raised her children in a Christian home, positioning Roper to step into the ministry she loves.

Roper’s pastor, Kevin Williams of First Baptist Church in Villa Rica, said the story is one that shows how God works out every detail to accomplish His will.

“It amazes me how God works all things together for good,” Williams said. “When you know all the details, and you have this young lady serving the Lord, and singing for the glory of God, it is absolutely amazing.”

In addition to her work with the elderly, Roper is a regular soloist at her church.

“Had it not been for those missionaries, had my mom not accepted Christ, I don’t know where my family would be,” Roper said. “My faith in Christ has just been the basis of my entire life. My mom nurtured that. She consistently encouraged me to pray, to read the Bible, and to have faith. She would always tell me that God is faithful, that He will take care of you.”

It’s the kind of story International Mission Board President Paul Chitwood says he never grows tired of hearing. In his travels throughout the U.S. and around the world, Chitwood often encounters people who tell him how their families heard the gospel from Southern Baptist missionaries.

“Only Heaven will reveal how many people will someday stand before the throne and the Lamb because God, in some way, used Southern Baptists who prayed, gave their money, sent missionaries, and went as missionaries themselves so the lost among the nations could hear the gospel,” he said.

Roper’s mom, a nurse, died in 2004, but she left indelible memories of her devotion to the Lord and of her joy in serving Him.

“Every morning she would sit in the kitchen by the window and read her Bible,” Roper said. “She would teach me Bible stories. And when I was grown with children of my own, I would see her teaching my children the same Bible stories she taught me.”

Those teachings formed the bedrock of Roper’s faith and have made her successful in her ministry at Baptist Retirement Communities.

Roper finishes her visit with Miss Neva, who in her younger years was a pastor’s wife and a teacher. She leans down and gives her a gentle hug, then walks out the door, still wiping away tears.

“When I came here for the first time, and those doors opened, I could almost feel God’s heart,” she said. “Where else could I minister to people in such a special way? I can share the gospel. I can pray over people. I can encourage the residents and staff. It’s really the believer’s ultimate dream.”

Veteran from Georgia recalls car bomb that strengthened his faith