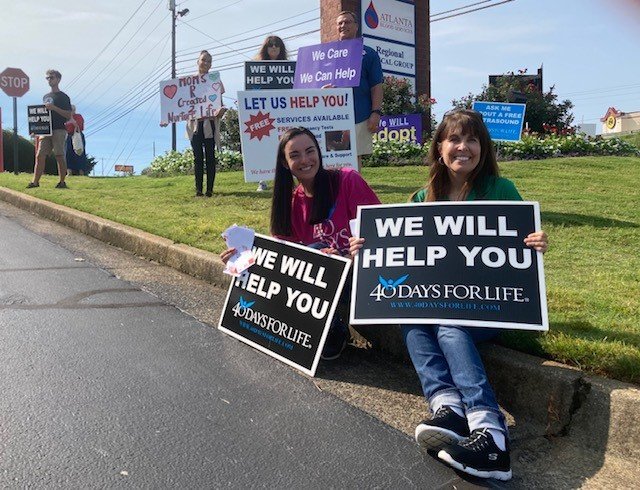 Suzanne and Rachel Guy pose outside a Planned Parenthood Clinic in Marietta, Ga. 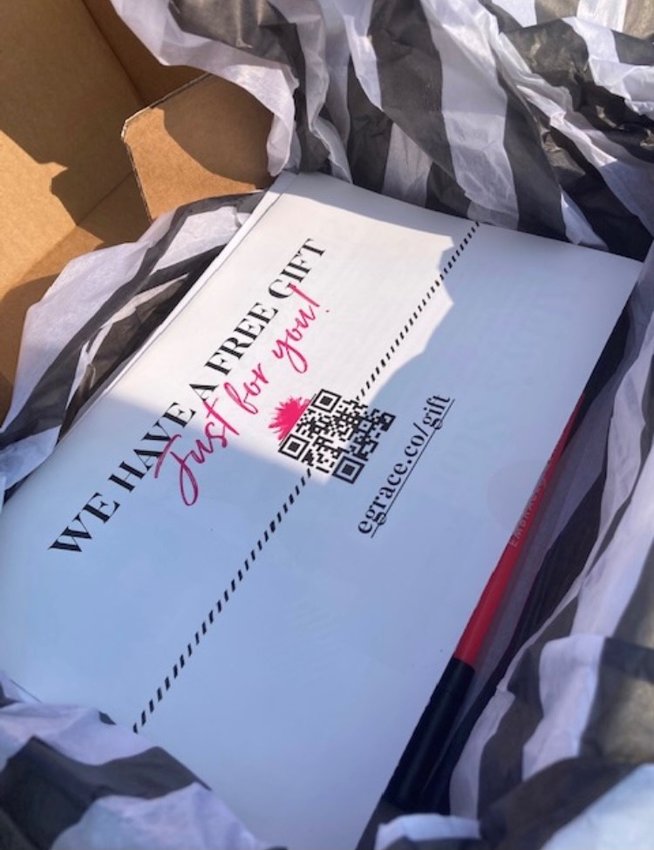 The Guys offer gifts, like this one from Embrace Grace, to women considering abortions in hopes of sparking discussions.

By Roger Alford
The Christian Index

The mother-daughter duo from First Baptist Church in Woodstock are on the frontlines of the continuing battle over abortion, but their approach is markedly different from the more militant pro-lifers often seen on television news programs in front of abortion clinics waving graphic signs and shouting hateful rhetoric.

The Guys’ placards say, “We Will Help You.” Instead of mere words, they dole out gift cards from grocery stores and restaurants, even small boxes wrapped in ribbons and bows, filled with goodies for newborns, including a baby-size shirt that says, “Best Gift Ever.”

They spend a lot of time on a narrow strip of grass across the parking lot from a Planned Parenthood clinic in Marietta, some 50 feet from the front door. Each time a young woman arrives at the clinic, Suzanne beckons to her.

“We would love to talk to you,” she says sweetly. “We’re here because we love you. Would you talk to us while you wait?”

Suzanne, who has been a sidewalk counselor outside abortion clinics for years, always speaks in soothing tones. It’s a natural trait her daughter inherited. Together, they’re helping lots of young women choose life for their unborn babies.

“These young women are frightened and confused,” Suzanne said, standing on the patch of public property that Marietta police have told her she and Rachel are allowed to occupy. “They may be being pressured by boyfriends or their own families to get abortions. We want them to know there is help, that we’re here for them.”

A young woman hears Suzanne’s pleas and walks tentatively across the parking lot to where she and Rachel wait. They greet her with reassuring smiles and strike up a conversation. The connection is immediate. It’s as if they’ve known each other for years. It’s apparent Planned Parenthood has lost yet another customer.

“The financial struggles are huge,” Rachel said. “Often, these young women feel they can’t afford to have a baby. We want to take away that concern.  We want them to know there is hope and there is help.”

Most of the young women going into the Planned Parenthood clinic in Marietta don’t respond to their invitations to talk. But enough do to keep Suzanne and Rachel motivated. In the past year and half, they have convinced 20 of them not to go through with abortions.

Saving unborn babies has been a passion for Suzanne since she was pregnant with Rachel, who is now 23 years old. Doctors insisted Suzanne abort Rachel, telling her during her first ultrasound that her baby wouldn’t live and that, if she somehow did survive, she’d likely have severe physical and mental disabilities.

“I’m lying on the table; the cold gel is on my stomach; and the ultrasound tech is moving the wand around,” Suzanne explained to Focus on the Family President Jim Daly in a nationwide radio broadcast earlier this year. “I’m excitedly looking at that beautiful baby, the humanity of that beautiful child on the ultrasound screen, and the next thing I know the technician says, ‘I need to excuse myself and go get the doctor.’ Now I knew in that moment that something was probably not right, but I was not prepared for what was about to happen.”

In the next moment, the doctor came rushing into the room frantically and repeatedly telling her she needed an abortion.

“Half your amniotic fluid is gone,” the doctor told her. “Your baby must have a chromosomal abnormality not compatible with life. You could die and your baby most certainly will die.”

When the doctor finally paused, Suzanne gave her adamant and emotional reply:

“I would never get an abortion. Stop saying that.”

When the pregnancy reached 26 weeks, Suzanne underwent a c-section. Her husband Peter saw Rachel the moment doctors lifted her from the womb. She weighed only 1 pound 2 ounces, but, he said, she was very much alive, wiggling and crying and waving her tiny arms around.

“My wedding band went over her hand and slipped past her elbow,” Peter explained in the Focus on the Family broadcast. “That’s how tiny she was.”

That experience is what made the Guy family the pro-life activists they are today.

Rachel, now a student majoring in Christian ministry at Trinity International University and leader of the pro-life group Marietta 40 Days for Life 365, said she’s grateful her parents refused to listen to the doctors who wanted to abort her.

“It shocks me to think that they devalued me,” she said of the doctors. “It makes my heart hurt.”

So they stand on the grassy patch in Marietta, reaching out to frightened young ladies considering abortions.

“Will you come talk to us?” Suzanne pleads with another young lady. “Please? We can help.”

Mike Griffin, the Georgia Baptist Mission Board’s legislative agent who works on public policy at the state level to curb abortion, said the Guys are both passionate and effective in saving the lives of unborn babies.

Griffin has joined them on the grassy patch in Marietta, and he has marveled at the number of young ladies who heed Suzanne’s call to talk.

“I believe the Lord has anointed her voice, that when she’s talking to people, they can hear her heart, her compassion, and that makes the difference,” he said.

The Guys welcome like-minded people to join them outside the Planned Parenthood clinic, but not if they’re there wave graphic signs or shout angry rhetoric. 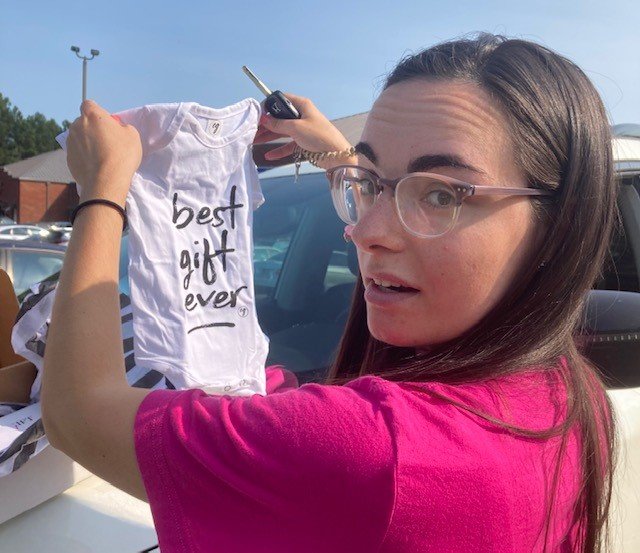 Rachel Guy shows one of the gifts she gives to expectant mothers.