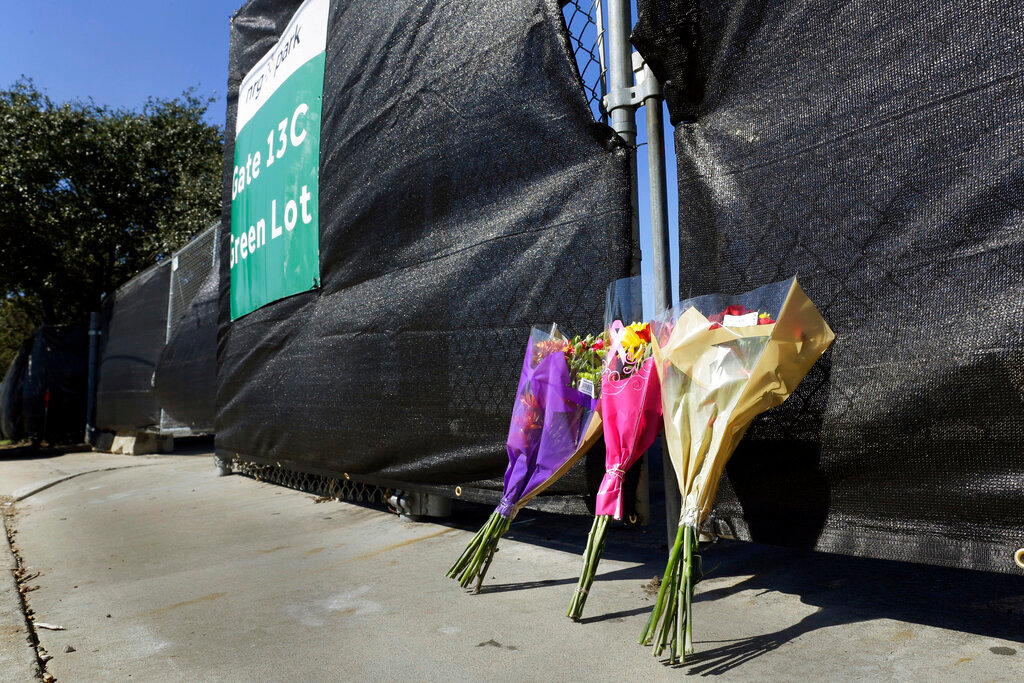 Flowers lay against the south fence surrounding the Astroworld festival grounds the day after at least eight died and scores were injured during a concert by rapper Travis Scott at his two day event, held at NRG Park Saturday, Nov. 6, 2021, in Houston. (AP Photo/Michael Wyke)..
Michael Wyke
Posted Sunday, November 7, 2021 3:06 pm
By JUAN A. LOZANO and JAMIE STENGLE Associated Press

HOUSTON (AP) — Investigators Sunday worked to determine how eight people died in a crush of fans at a Houston music festival, as friends and loved ones mourned the victims and a makeshift memorial of flowers and candles took shape at the site.

Authorities planned to use videos, witness interviews and a review of concert procedures to figure out what went wrong Friday night during a performance by rapper Travis Scott. The tragedy unfolded when the crowd rushed the stage, squeezing people so tightly they couldn't breathe.

Bouquets, votive candles, condolence notes and T-shirts, including a Scott shirt, were left outside the site at NRG Park.

Michael Suarez, 26, came to the growing memorial after attending the concert.

”It’s very devastating. No one wants to see or hear people dying at a festival," Suarez said. "We were here to have a good time — a great time — and it’s devastating to hear someone lost their lives.”

The dead, according to friends and family members, included a 14-year-old high school student; a 16-year-old girl who loved dancing; and a 21-year-old engineering student at the University of Dayton. The youngest was 14, the oldest 27.

Houston officials did not immediately release the victims' names or the cause of death.

Thirteen people remained hospitalized Sunday. Their conditions were not disclosed.

City officials said they were in the early stages of investigating what caused the pandemonium at the sold-out Astroworld festival, an event founded by Scott. About 50,000 people were there. Authorities said that among other things, they will look at how the area around the stage was designed.

One concertgoer said that as a timer ticked down to the start of Scott’s show, held in a fenced-off parking lot, the crowd pushed forward. Screaming and panic ensued, and people began passing out.

On video posted to social media, Scott could be seen stopping the concert at one point and asking for aid for someone in the audience: “Security, somebody help real quick.”

In a tweet posted Saturday, Scott said he was “absolutely devastated by what took place." He pledged to work “together with the Houston community to heal and support the families in need.”