In one of the more heart-wrenching scenes of "I'm Not Ashamed" Rachel Scott's red Acura becomes a memorial site after the horrific 1999 shootings at Columbine High School in Littleton, CO. Twelve students and a teacher died in the attack before the shooters took their own lives. IMNOTASHAMEDFILM.COM/Special
Posted Thursday, October 6, 2016 11:25 am
Scott Barkley

In one of the more heart-wrenching scenes of "I'm Not Ashamed" Rachel Scott's red Acura becomes a memorial site after the horrific 1999 shootings at Columbine High School in Littleton, CO. Twelve students and a teacher died in the attack before the shooters took their own lives. IMNOTASHAMEDFILM.COM/Special[/caption]

DULUTH — When Georgia Baptist Masey McLain told her friends she'd earned the role of Rachel Joy Scott in a movie, not many were familiar with the first fatality of the Columbine High School shooting on April 20, 1999. 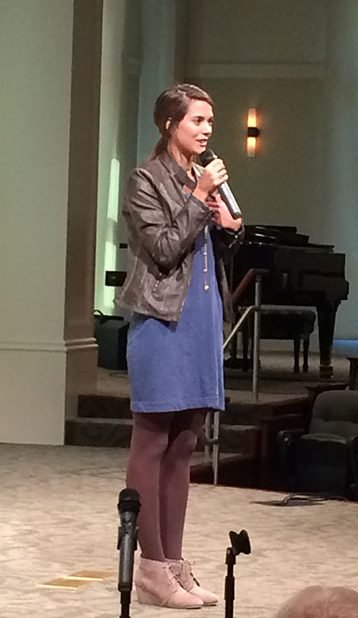 Masey McLain talks to viewers at an Oct. 5 screening about her experience playing Rachel Scott in I'm Not Ashamed, due in theaters Oct. 21. SCOTT BARKLEY/Index

McLain's performance in I'm Not Ashamed, to be released Oct. 21, may change that.

McLain and executive producer Benny Proffitt spoke about the movie before and after a screening held Oct. 5 at the Georgia Baptist Mission Board Missions and Ministry Center. Both emphasized the movie's purpose.

The Columbine shooting serves as the background. But, Scott's spiritual journey carries the narrative. She wasn't perfect. Even after rededicating her life to God, Scott still struggled with wanting popularity versus God's best for her. Students will identify with that, and student ministers will identify with seeing it.

"In order to know Rachel’s personality and character I was permitted to read all of her journals as well as talk to her mom," McLain told The Index earlier this year. "Her mom would sit down and tell me all about Rachel. During our conversations I discovered that I had some of Rachel’s quirks and personality traits. The more I learned about Rachel, the more I would think, ‘Hey, I can relate to that.'"

On the day of the shooting Scott and classmate Richard Castlado ate lunch outside the cafeteria when students Eric Harris and Dylan Klebold approached and opened fire. Suffering from multiple bullet wounds, Scott and Castaldo each received the same question from Harris.

"Do you believe in God?"

Castaldo, an agnostic to this day, said no and was spared. He recalled Scott's response to Harris.

...and Harris' words before pulling the trigger.

“I will never forget the day we filmed the shooting scene," McLain recalled. "The Lord flooded my mind with scripture and worship songs throughout that whole scene. I have never felt His presence so strongly. It was truly amazing and very hard to explain, but I felt the Lord hovering over that day so much.

“He allowed me to go to so many places emotionally that I had never been. I am an actress and have been acting for about six years and I know how to be in a moment during a scene emotionally, but it was the Lord that truly gave me everything I needed to do this part." 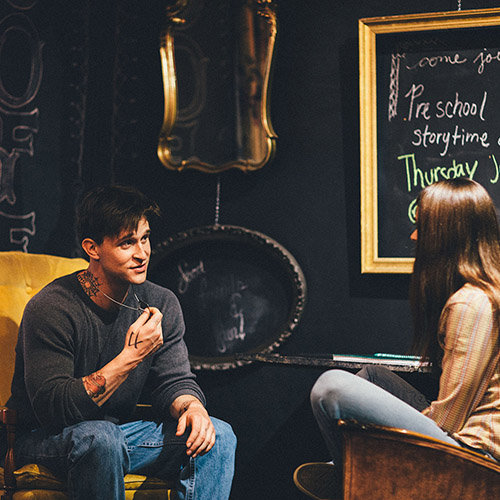 "If we'd told the stories of every student Rachel Scott impacted at Columbine, the movie would've been eight hours long," Proffitt told those following the screening.

A longtime student pastor, Proffitt founded First Priority of America in 1985 to assist youth ministries develop evangelism strategies for their local school. In 2009 he left that organization to start First Priority Global. Now, he's found himself in a movie producer's role.

"The writers for this movie spent time talking to those personally affected by this event and Rachel's life," he said. "We wanted it to be an accurate portrayal."

In the earlier Index story, McLain reflected on a teenager's concept of value. Throughout her high school years Scott dealt with longtime friends rejecting her because of her faith. In the end, though, she resolved to touch others through the compassion she'd experienced in Christ. Her story has now traveled globally to millions of students and due to her age and circumstances of her death, she's drawn comparisons to Anne Frank.

“Following Jesus doesn’t mean that you’ll be popular or have a lot of Instagram followers, but it means your living for a greater purpose – a purpose that is eternal."