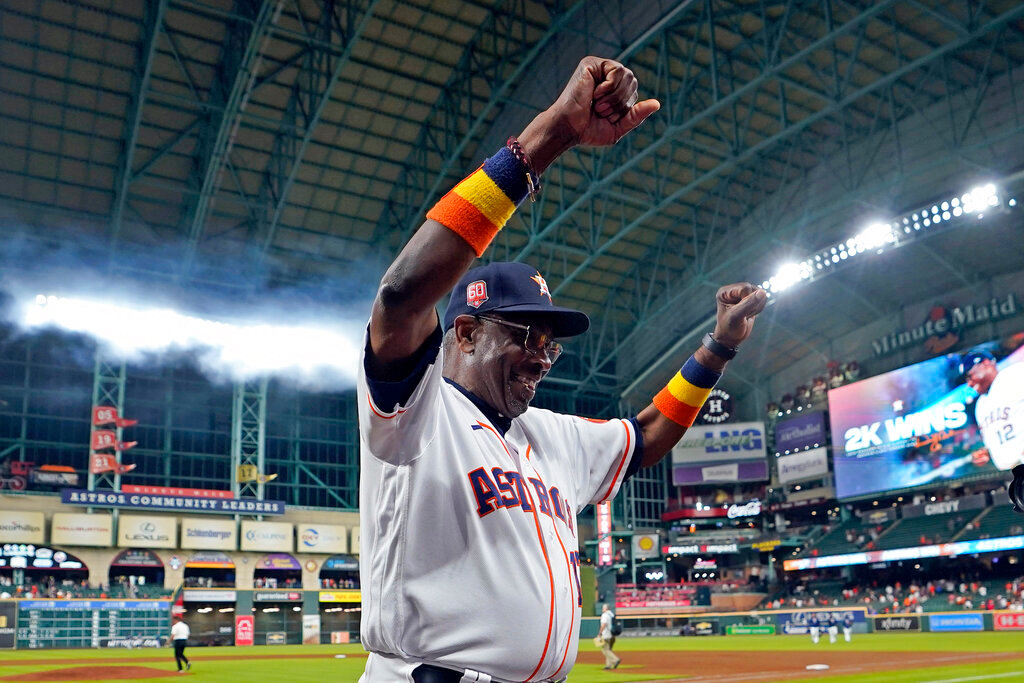 Houston Astros manager Dusty Baker Jr. (12) celebrates after a baseball game against the Seattle Mariners Tuesday, May 3, 2022, in Houston. Baker won his 2,000th game Tuesda, becoming the 12th skipper in major league history to reach the milestone and the first Black man to do it. (AP Photo/David J. Phillip) 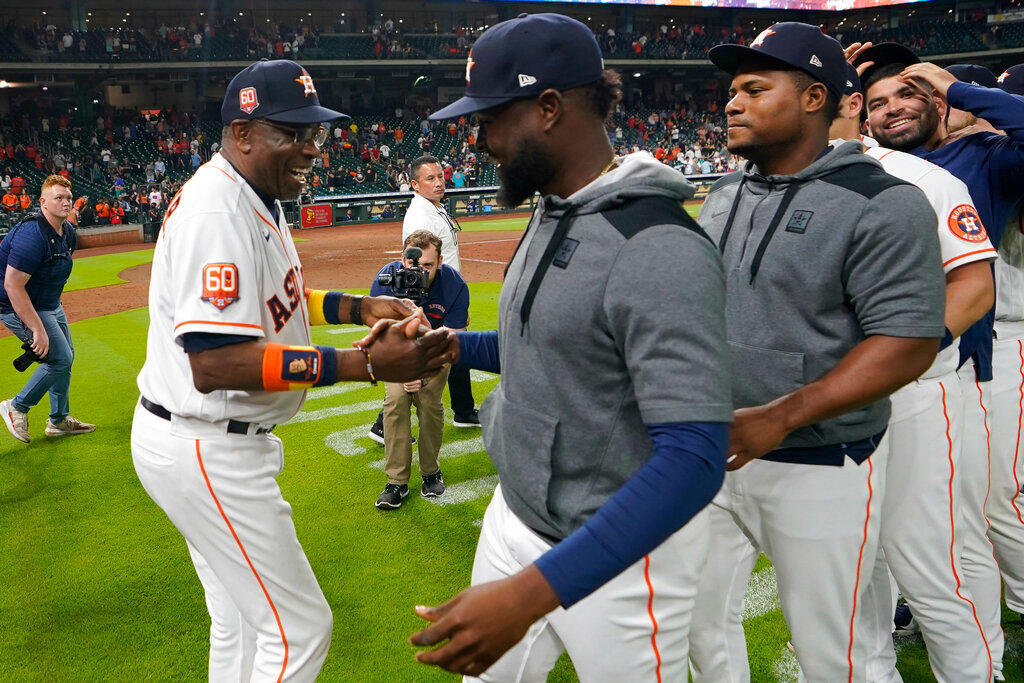 Houston Astros manager Dusty Baker Jr., left, celebrates with players after a baseball game against the Seattle Mariners, Tuesday, May 3, 2022, in Houston. Baker won his 2,000th game Tuesda, becoming the 12th skipper in major league history to reach the milestone and the first Black man to do it. (AP Photo/David J. Phillip) 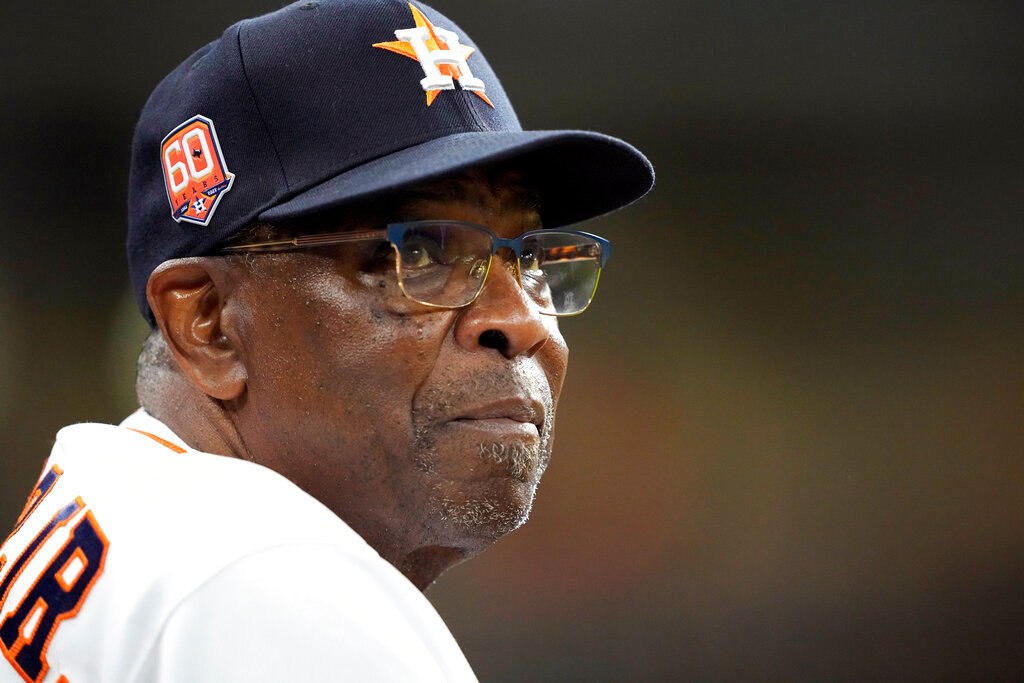 Houston Astros manager Dusty Baker Jr. looks at the scoreboard during the second inning of a baseball game against the Seattle Mariners, Tuesday, May 3, 2022, in Houston. Baker won his 2,000th game Tuesda, becoming the 12th skipper in major league history to reach the milestone and the first Black man to do it. (AP Photo/David J. Phillip)
Previous Next
Posted Wednesday, May 4, 2022 4:28 pm
By KRISTIE RIEKEN, Associated Press

Houston Astros manager Dusty Baker won his 2,000th game Tuesday night, becoming the 12th skipper in major league history to reach the milestone and the first Black man to do it.

The benchmark victory came in Houston’s 4-0 win over the Seattle Mariners and comes more than 29 years after he collected his first win on April 6, 1993, in San Francisco’s 2-1 victory over St. Louis.

“I’m probably one of the luckiest men to ever walk on this earth,” a grinning Baker said minutes after the final out.

The 72-year-old Baker said being the first Black manager to reach 2,000 wins makes the achievement even more meaningful.

It’s the latest milestone in a storied career as a player and manager that has spanned more than 50 years. Baker has reached the World Series twice as a manager, last season with the Astros and in 2002 with the Giants. As a player, he went three times with the Dodgers, winning it all as a big-hitting left fielder in 1981.

So where does this moment rank?

Ten of the 11 other managers who have accumulated at least 2,000 wins are in the Hall of Fame. Bruce Bochy (2,003), who isn’t yet eligible, is the only exception.

“This should lead straight to the Hall of Fame," Astros catcher Martín Maldonado said.

Baker's players presented him with a bottle of vintage Dom Pérignon champagne they signed with a gold marker to commemorate the achievement. The team toasted Baker with far more reasonably priced champagne in the clubhouse after the game.

His wife, Melissa, and a group of about 10 friends were at the ballpark. Melissa Baker smiled as she filmed her husband postgame from the stands as the big screen displayed a picture of him with the words “2K Wins" in huge white letters.

Baker's career record is 2,000-1,745 and he's the only manager in major league history to take five different teams to the postseason.

“It’s an honor to play for somebody who loves the game and loves his team and is so knowledgeable about the game of baseball and who has had such a storied career,” Houston third baseman Alex Bregman said. “To be able to learn from him, play for him and just to be able to suit up with him every single day is very special and nobody in here takes that for granted."

There was a time Baker wondered if he’d even get a chance to chase this milestone. After being fired by the Nationals following a 97-win season in 2017, Baker didn’t get another job until 2020 after Houston’s sign-stealing scandal cost manager A.J. Hinch his job.

“If there wasn’t a scandal, I wouldn’t be in this position,” Baker said. “My phone wasn’t ringing off the hook. Three different times I lost jobs and twice I was winning, and I didn’t get a call for two years... so, yeah, it’s just a matter of perseverance. And I’m here and I'm... where I’m supposed to be.”

Right-hander Lance McCullers raved about Baker as a manager and a man and noted the difficult situation he walked into when he was hired in Houston.

“He helped us through a tough time as a clubhouse," McCullers said. “There in 2020 we were navigating through a lot of choppy water (and) everything going on post-COVID. He’s earned our respect. It’s a big milestone for him tonight. Probably one of the most exclusive clubs around."

Baker, who needs 41 wins to move all the way up to No. 9 on the career list, was asked about cracking the top 10.

Baker said the first thing he thought of after the final out was being there when Bochy, a good friend, reached 2,000 wins. And then a second thought immediately popped into his head.