Musk aims to ease concerns in address to Twitter workers 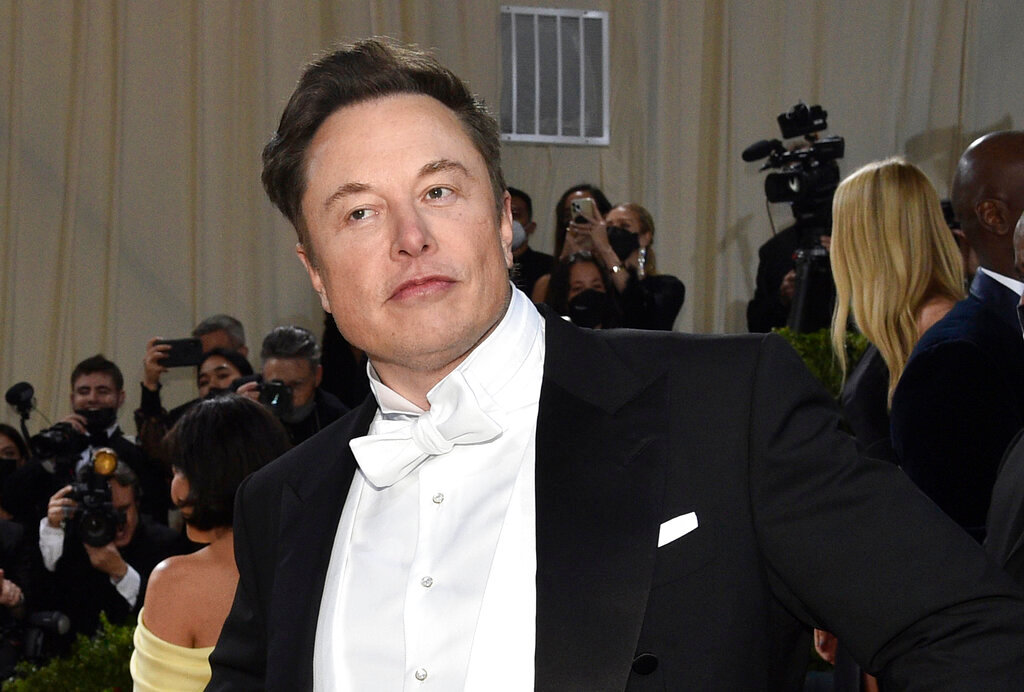 Elon Musk attends The Metropolitan Museum of Art's Costume Institute benefit gala celebrating the opening of the "In America: An Anthology of Fashion" exhibition on May 2, 2022, in New York. (Photo by Evan Agostini/Invision/AP)
Posted Thursday, June 16, 2022 2:32 pm
By BARBARA ORTUTAY, Associated Press

In an unusual move for what’s been an unusual takeover bid for Twitter by the world’s richest man, Tesla CEO Elon Musk met virtually with the social platform’s employees Thursday, even though his $44 billion offer has not yet been completed.

"Trust is as trust does. I tend to be extremely literal in what I say...One does not to read between the lines. One can simply read the lines,” Musk said in the meeting, according to a tweet from Nola Weinstein, Twitter's global head of brand experiences and engagement.

Twitter CEO Parag Agrawal announced the all-hands meeting to employees in an email on Monday, saying they’d be able to submit questions in advance, according to The Wall Street Journal.

The meeting is a “clear step in the right direction towards the chances of a deal happening and a smart strategic move as Twitter employees have been left in the dark over the past few months and have many questions during this volatile period of uncertainty,” said Wedbush analyst Daniel Ives.

One of Musk's key points at the meeting, which started at 9 a.m. Pacific time, was to make Twitter “so compelling that you can't live without it,” Weinstein tweeted. Musk, who has more than 98 million followers on Twitter and its one of the platform's most prolific users, also said that while some people “use their hair to express themselves, I use Twitter," according to Weinstein.

Musk reached a deal to acquire Twitter in April, but he has clashed with the company repeatedly since then over the number of bots, or fake accounts, that exist on the social media platform. Musk said he was putting the deal on hold on May 13, although it seems unlikely that he can do that on his own. Musk said he needed more data from the company about those bot accounts, despite the fact hat Twitter has reported its bot estimates — and its admission that they may be too low — to investors for years.

Twitter employees could have other reasons to be nervous about Musk’s impending takeover. The irascible billionaire has levied a barrage of criticism at the company, from its moderation and safety policies, which he terms a threat to “free speech,” to its anonymous user accounts, which he would like to eliminate, to its ban of former President Donald Trump, which he has pledged to reverse.

“If there are 2 sides to an issue it’s important to represent multiple opinions. Most issues in the world are complex,” Weinstein quoted Musk as saying.

Harry Kraemer, a former CEO Baxter International and professor at Northwestern University’s Kellogg School of Management, pointed out that the deal is “not a guarantee until it is done” and there are still plenty of steps left in the process before the purchase can be completed.

“In my experience it is very unusual and almost bizarre for someone who has not purchased the company to speak to current employees of the company he is looking to purchase,” Kraemer said.

Musk has also targeted Twitter’s work-from home policy, having once called for the company’s headquarters to be turned into a “homeless shelter” because, he said, so few employees actually worked there. The comment also served as a thinly veiled jab at San Francisco, which has a large homeless population. He said during Thursday's meeting that he strongly favors working in person, according to Weinstein.

It’s not clear if this week’s meeting means that the two sides have come closer together on resolving their issues. Shares of Twitter have been trading well below the $54.20 per share that Musk has agreed to pay amid Wall Street doubts that the deal will be consummated.