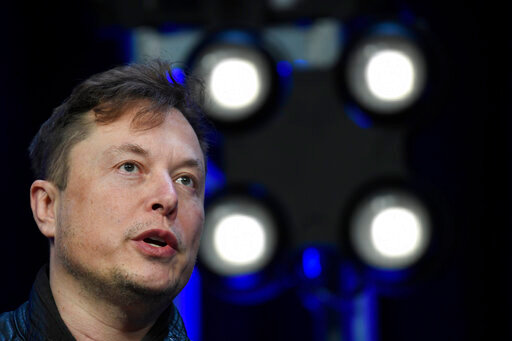 FILE - Tesla and SpaceX Chief Executive Officer Elon Musk speaks at the SATELLITE Conference and Exhibition in Washington on March 9, 2020. Newly disclosed text messages between Musk and Twitter CEO Parag Agrawal showed that the two men briefly bonded in April 2022 over their love of engineering, until Musk tweeted this message early on Aug. 9, 2022: "Is Twitter dying?" (AP Photo/Susan Walsh, File)
Posted Friday, September 30, 2022 8:57 am
By MATT O'BRIEN and RANDALL CHASE

DOVER, Del. (AP) — Newly disclosed text messages between Elon Musk and Twitter CEO Parag Agrawal showed that the two men briefly bonded in the spring over their love of engineering — at least until Musk publicly tweeted this message early on April 9: ‘ Is Twitter dying? ’”

That soured a relationship that appeared to bloom around the time Twitter offered the billionaire Tesla CEO a board seat after learning that he had purchased a huge stake in the company. In the texts, Agrawal questioned Musk about his public criticism of Twitter, describing the comments as unhelpful and distracting within the company.

“What did you get done this week?” Musk tersely responded less than a minute later. “I’m not joining the board. This is a waste of time. Will make an offer to take Twitter private.”

The messages revealed in Delaware court filings ahead of a high-stakes trial offer a window into Twitter’s delicate negotiations with Musk. At the time, the billionaire had not only invested heavily in Twitter shares, he was publicly proposing ideas for improving it or starting an alternative.

Twitter and Musk are due in court Oct. 17 for a trial that will decide whether the world's richest man will be forced to complete his agreed-to $44 billion acquisition of Twitter. The documents were first revealed on @chancery_daily, a Twitter account that closely follows the Delaware Chancery Court, where the five-day trial will take place.

“I have a ton of ideas, but lmk if I’m pushing too hard,” Musk texted Agrawal on April 7, shortly after Twitter offered him the board seat. “I just want Twitter to be maximum amazing.”

Agrawal invited Musk to “treat me like an engineer” instead of a CEO as they worked through technical questions together. At one point, Musk wrote, “I love our conversations!”

Two days after the blowup about Musk's “Twitter dying” tweet, on April 11, Agrawal announced Musk would not be joining the board after all. On April 14, Twitter revealed in a securities filing that Musk had offered to buy the company outright for about $44 billion. After first trying to thwart the hostile takeover, Twitter ended up agreeing to the deal on April 25.

The text exchanges were included in redacted documents that Musk lawyers filed early Thursday after challenging a Twitter claim that they couldn't be made public because they contained sensitive information. Several of the “public versions” of those Twitter documents contain wholesale redactions and are almost entirely blacked out. The documents containing the Musk and Agrawal texts, by contrast, were not.

The collection of text messages also includes Musk's conversations with Jack Dorsey, a Twitter co-founder and former CEO. Dorsey was enthusiastic about Musk's involvement, telling him that while the board was “terrible,” Agrawal was an “incredible engineer.”

The texts also include Musk's opinions on Twitter with a host of people in his orbit, including podcaster Joe Rogan, Oracle co-founder Larry Ellison, venture capitalists and Musk's own brother.

While the lawyers tussle over which documents will be allowed as trial evidence, more witnesses are showing up for depositions.

Among those deposed Thursday was whistleblower Peiter “Mudge” Zatko, a former Twitter security chief who testified to Congress earlier this month about what he described as Twitter's weak cyber defenses. Musk's legal team hopes Zatko's knowledge about Twitter's problems with fake and spam accounts will bolster Musk's key argument for terminating the deal.

Musk could be deposed as early as next week.