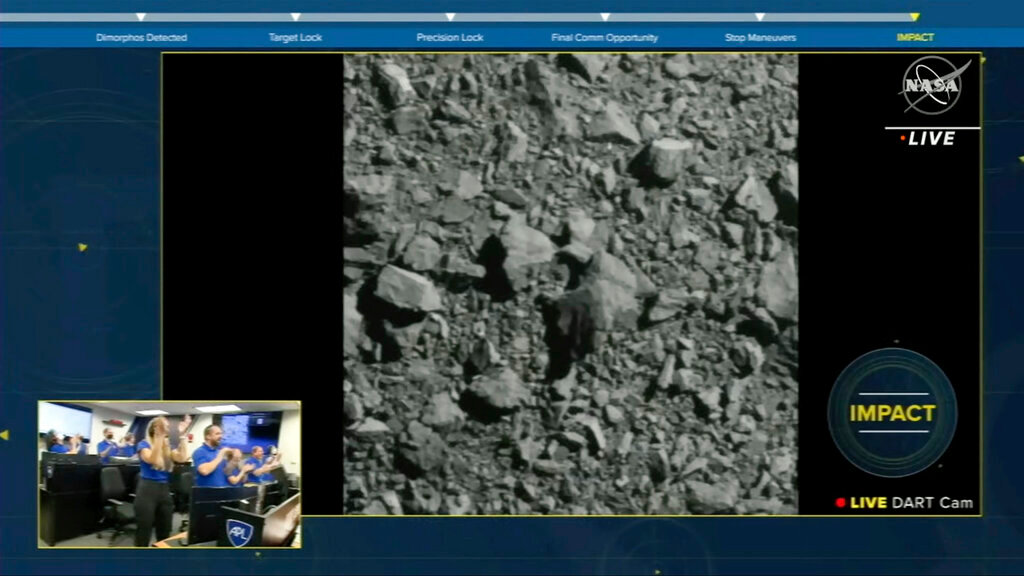 In this image made from a NASA livestream, the Double Asteroid Redirection Test spacecraft crashes into an asteroid on Monday, Sept. 26, 2022. (ASI/NASA via AP) 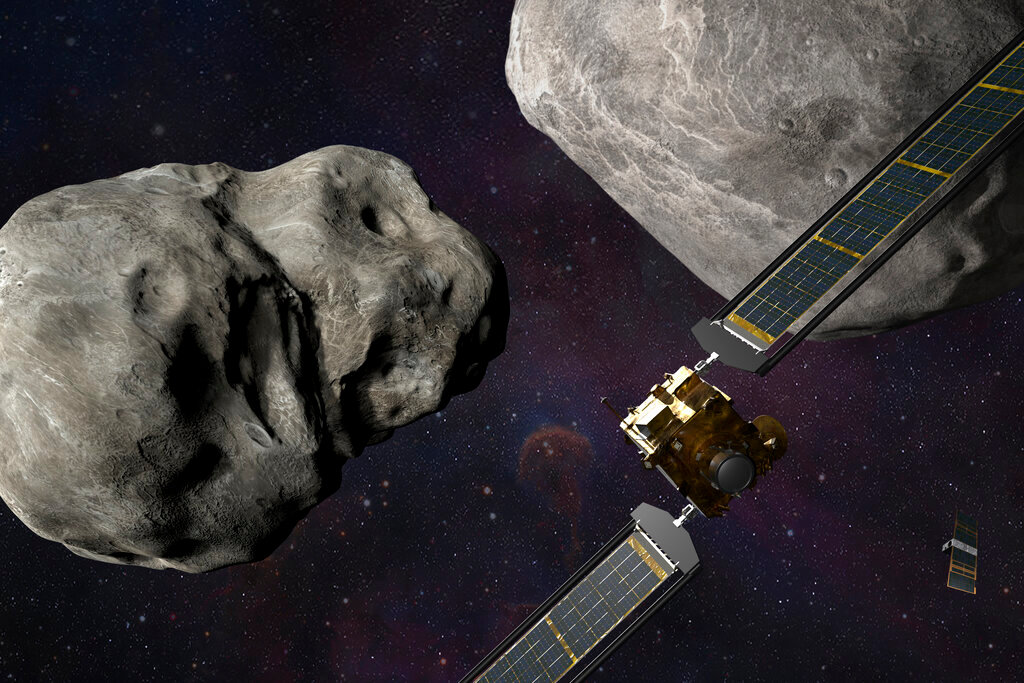 The galactic slam occurred at a harmless asteroid 7 million miles away, with the spacecraft named Dart plowing into the space rock at 14,000 mph. Scientists expected the impact to carve out a crater, hurl streams of rocks and dirt into space and, most importantly, alter the asteroid’s orbit.

“We have impact!” Mission Control's Elena Adams announced, jumping up and down and thrusting her arms skyward.

Telescopes around the world and in space were aimed at the same point in the sky to capture the spectacle. Though the impact was immediately obvious — Dart’s radio signal abruptly ceased — it will take as long as a couple of months to determine how much the asteroid’s path was changed.

The $325 million mission was the first attempt to shift the position of an asteroid or any other natural object in space.

“As far as we can tell, our first planetary defense test was a success,” Adams later told a news conference, the room filling with applause. “I think Earthlings should sleep better. Definitely, I will.”

NASA Administrator Bill Nelson reminded people earlier in the day via Twitter that, “No, this is not a movie plot.” He added in a prerecorded video: ”We’ve all seen it on movies like “Armageddon,” but the real-life stakes are high."

With an image beaming back to Earth every second, Adams and other ground controllers in Laurel, Maryland, watched with growing excitement as Dimorphos loomed larger and larger in the field of view alongside its bigger companion. Within minutes, Dimorphos was alone in the pictures; it looked like a giant gray lemon, but with boulders and rubble on the surface. The last image froze on the screen as the radio transmission ended.

Flight controllers cheered, hugged one another, and exchanged high fives. Its mission complete, the Dart team went straight into celebration mode. There was little sorrow over the spacecraft's demise.

“Normally, losing signal from a spacecraft is a very bad thing. But in this case, it was the ideal outcome,” said NASA program scientist Tom Statler.

Johns Hopkins scientist Carolyn Ernst said the spacecraft was definitely “kaput," with remnants possibly in the fresh crater or cascading into space with the asteroid's ejected material.

Scientists insisted Dart would not shatter Dimorphos. The spacecraft packed a scant 1,260 pounds, compared to the asteroid’s 11 billion pounds. But that should be plenty to shrink its 11-hour, 55-minute orbit around Didymos.

The impact should pare 10 minutes off that. The anticipated orbital shift of 1% might not sound like much, scientists noted. But they stressed it would amount to a significant change over years.

“Now is when the science starts,” said NASA’s Lori Glaze, planetary science division director. “Now we’re going to see for real how effective we were.”