Nelson Price, one of the nation's first megachurch pastors, honored for his impact 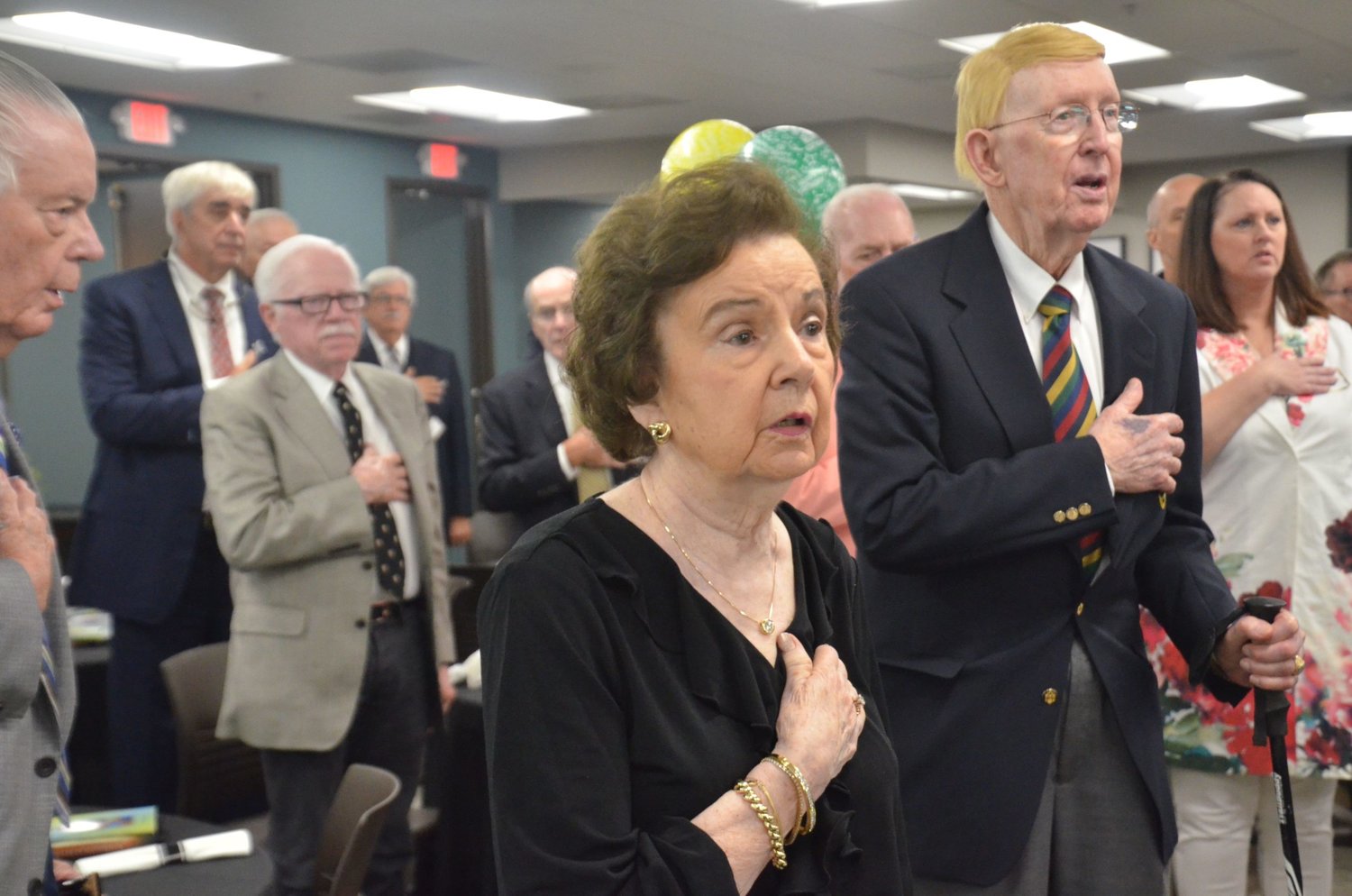 Trudy and Nelson Price with hands over their hearts pledge allegiance to the American flag at a reception where he was honored.

SMYRNA -- Nelson Price, pastor emeritus of Roswell Street Baptist Church in Marietta, was honored recently at a luncheon sponsored by Vinings Bank on the occasion of his 90th birthday. The event was attended by more than 200 of Price’s closest friends.

Price has been one of the most influential and respected citizens in Marietta for decades. However, the impact of his life has been felt in meaningful ways not only in Cobb County and Georgia, but across the width and breadth of the land. It would be difficult to find anyone with a more extensive and versatile resume than this tall, personable native of Osyka, a small town in Mississippi near the Louisiana border.

On November 1, 1963, Price became pastor of Roswell Street Baptist Church and led it to become one of the first mega churches in America. His vision, leadership and oratorical ability as a preacher of the Gospel has marked him as an exceptional and exemplary pastor. Those who have heard him preach or read his books or the commentaries on his website or in the Marietta Daily Journal would have to conclude that he is a wordsmith with a vast vocabulary. Amazingly, he has the ability to speak the Kings English with the kind of rich mellifluence and commanding eloquence sufficient to reduce a throng of thousands into a hushed silence and at times converse in the dialectical, Acadian speech of the Cajuns on “Swamp People” way down in the bayous of Southern Louisiana.

If you were to read his resume and attempt to calculate all of his incredible accomplishments as a pastor, preacher, author, scholar, Christian statesman, guardian of the faith, community leader, athlete and champion for the Fellowship of Christian Athletes and national influencer you would be hard pressed to understand how one individual could cram so many achievements in only 90 years.

During Price’s 35-year tenure as pastor of the Roswell Street Baptist Church a massive church campus was developed, including a 4,000-seat worship center, the second largest sanctuary in the southeast at the time of its completion. Many special events were hosted by the church and the gracious pastor.

Bailey Smith held some of his most effective Real Evangelism Conferences at Roswell Street. Babbie Mason, beloved Christian music writer and vocalist, who spoke and sang at the luncheon recently recalled the Real Evangelism Conference in 1985 when she sang “All Rise” with the choir from Eastside Baptist Church. Those who recall that special worship experience will remember that the song was spiritually electrifying to the vast congregation that night.

John McKay, who was leading the congregational music asked Babbie to sing “All Rise” again. By the time the service ended Babbie and the choir had sung the song three and one-half times. Heaven came down and glory filled the worship center with unbridled praise and joy. Price was the welcoming and congenial pastor who provided those special events, but Sunday worship services at Roswell Street were regularly accented by grand music and powerful preaching. Additionally, the “Come Alive” television and radio broadcast ministry of the church had the capacity of reaching into 20 million homes each week.

Joe Daniell, Executive Vice President of the Vinings Bank and member of Roswell Street Baptist Church, declared, “Dr. Price accomplished so much as a pastor, because he believed it was important to saturate the whole county with his presence in meaningful ways. He has been known for his incredible work ethic. He has touched practically every segment of our culture as an ambassador for Christ. His influence for good and for God continues to be felt in many places in our society.”

Master of Ceremonies for the luncheon was Ike Reighard, pastor of Piedmont Baptist Church in Marietta and CEO of Must Ministries, who presided over the festivities with his typical aplomb and engaging manner. Among the guests who addressed those in attendance were former chief justice of the Georgia Supreme Court, Robert Benham, who hailed Price as a bridge builder and quoted Will Allen Dromgoole’s beautiful poem “The Bridge Builder” to illustrate the celebrated pastor’s ministry of reconciliation.

Fellowship of Christian Athlete representatives Shane Williamson (FCA President and CEO) and Dicky Clark (FCA Vice President and former UGA football player and coach) were present to salute the Roswell Street Pastor Emeritus regarding his extraordinary contribution to the ministry of FCA. Price, who received varsity letters in basketball and track from Southeastern Louisiana University, is a Life-Time Trustee of the FCA and at the luncheon Williamson described Price as a great communicator, a great leader and a great servant and presented him a figurine of Christ washing the feet of a disciple and in doing so welcomed Price to the Fellowship of Christian Athletes Hall of Champions.

Present Roswell Street Pastor Michael Lewis read a letter from the church to Price stating, “We salute Dr. Price’s authentic citizenship in our community where he’s lived and served. The fruit of his life reflects his deep compassion manifested through his giving to others.  The ripple effect of his character shines forth still today, bringing light to darkness, stretching from Marietta’s Roswell Street across the city of Marietta, Cobb County, into our entire state and nation. He’s a “jewel” in our community, honoring the Cross, the Constitution, and our country through his character, conduct and his rich, deep voice of valor.”

Furthermore, Lewis announced that the church was donating $2,000 to the National Day of Prayer Task Force in honor of Dr. Price. The Cobb County Prayer Breakfast was started in 1985 and Price has been instrumental in its growth and success each year and the event has become a model for other such prayer emphases in cities across the nation.

It has been said that behind every great man there is a surprised wife. However, I doubt if Price’s wife, Trudy, has been greatly surprised at his accomplishments. She has stood by him and aided him in his work as a faithful servant of the Lord. The Prices’s service to the Lord has been a shared ministry. During the luncheon State Senator Lindsey Tippins referred to her as Saint Trudy. A word of commendation to a faithful wife of 65 years is certainly in order even when the focus is on a new nonagenarian.