Rhys Stenner: ‘We suddenly felt momentum, like we had a breeze behind us’ 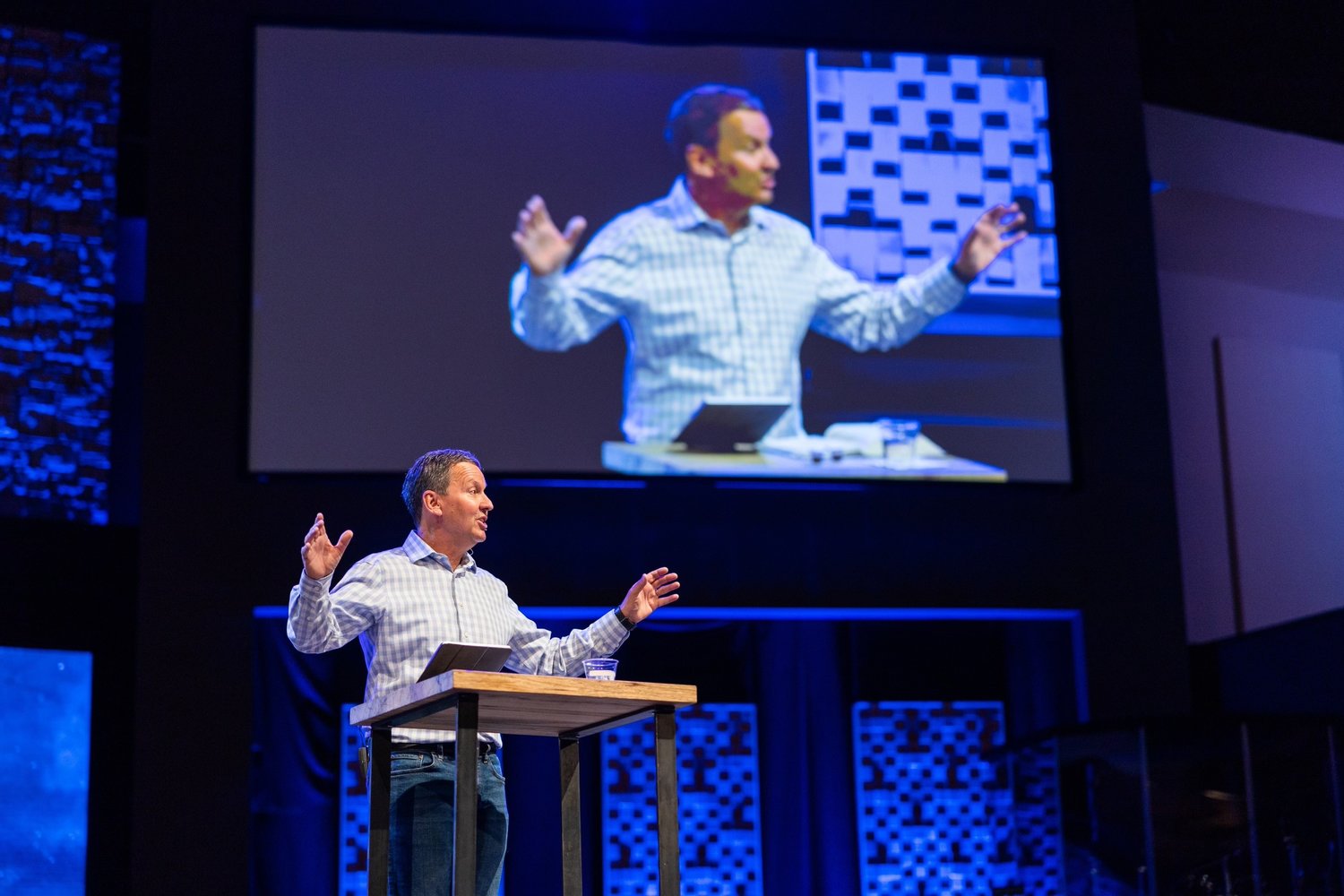 New Hope Baptist Church Pastor Rhys Stenner preaches in Sunday morning worship. The church is seeing a rebound in baptisms since the COVID-19 pandemic has subsided. 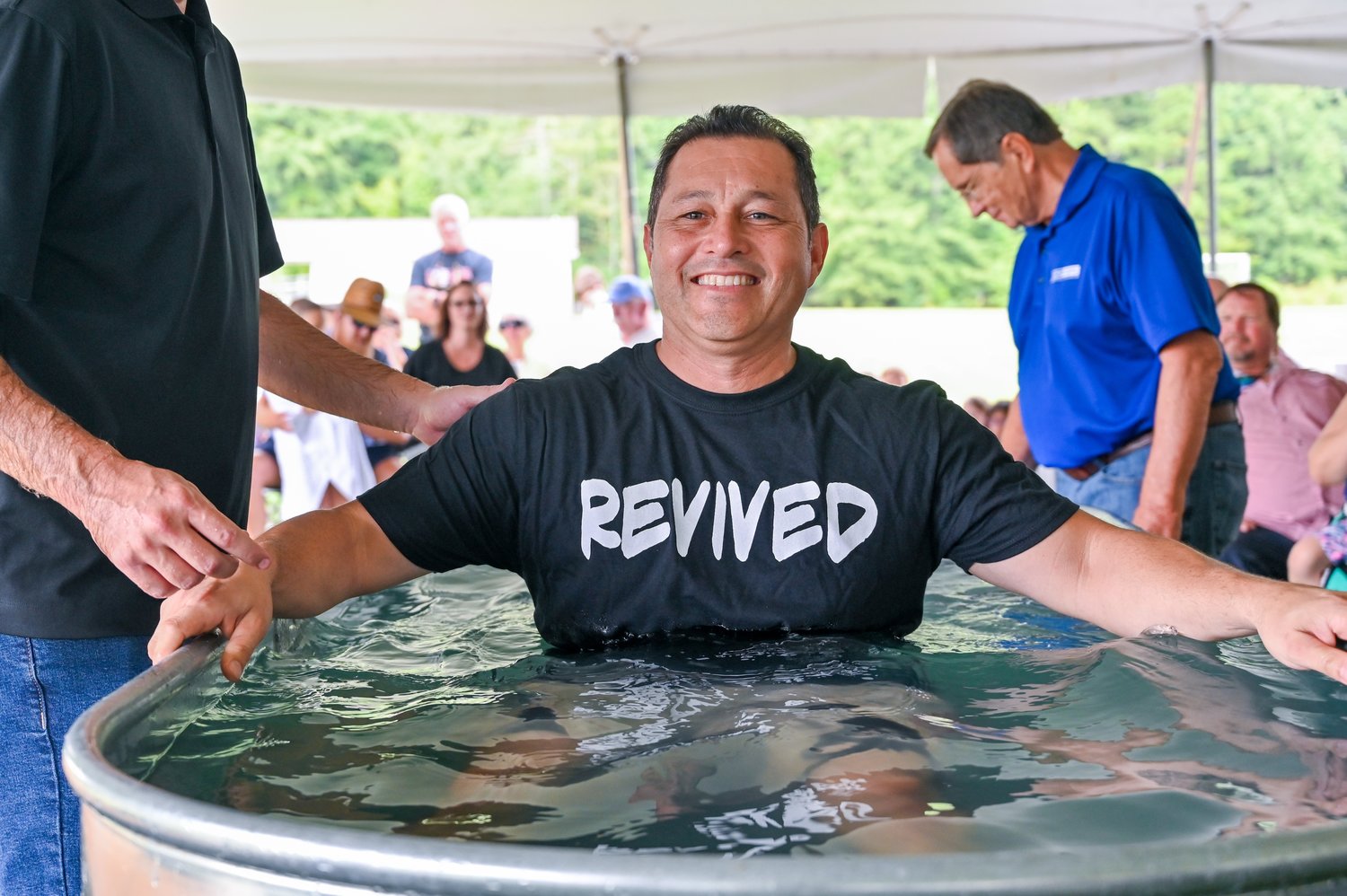 Danny Moreno smiles as he prepares for baptism at New Hope Baptist Church. With the pandemic in the past, the congregation recently saw 40 baptisms in 40 days. 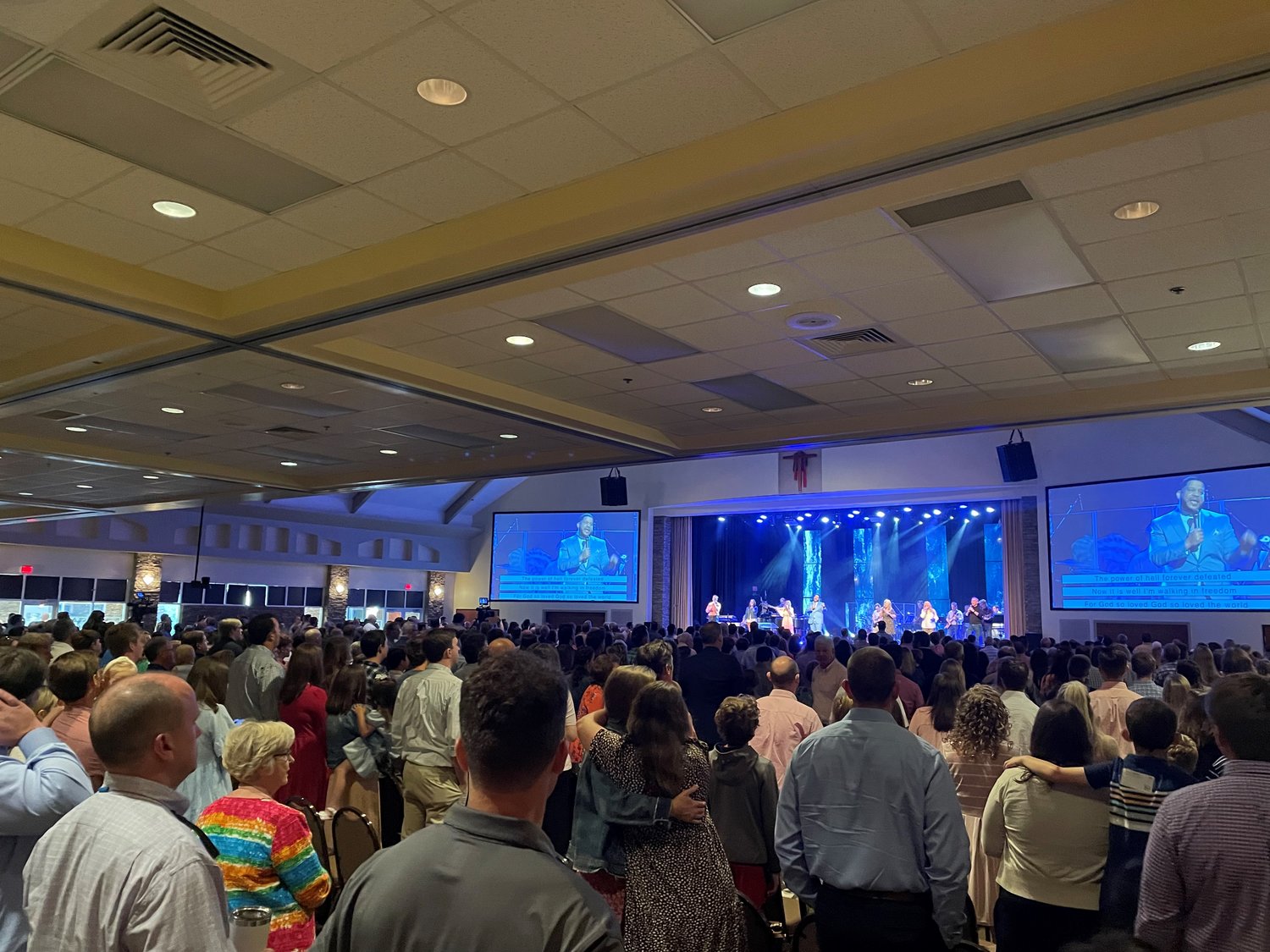 People gather for worship at New Hope Baptist Church. Crowds have grown at the church since the COVID-19 pandemic has subsided. 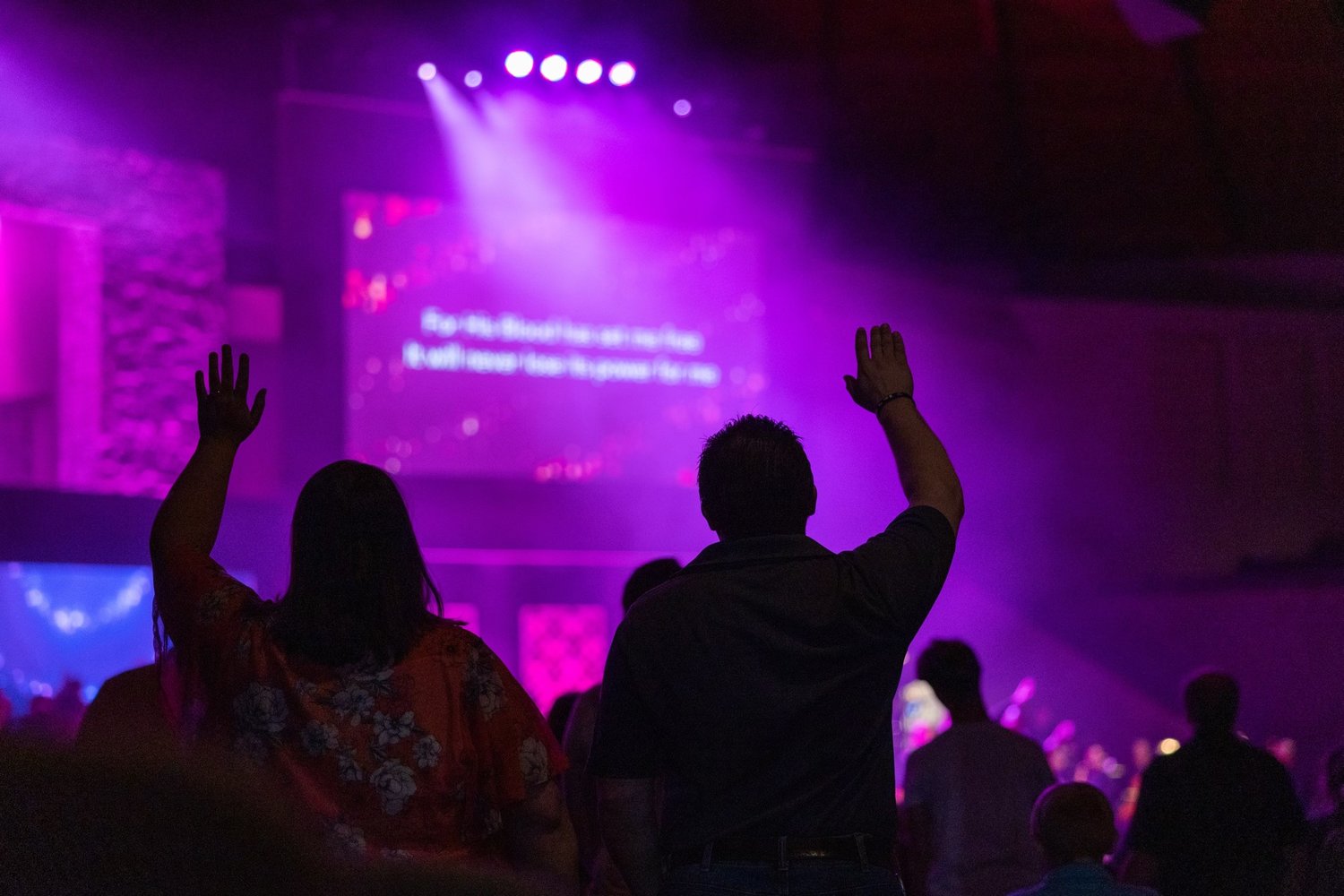 Worshippers praise the Lord during a service at the Fayetteville church. 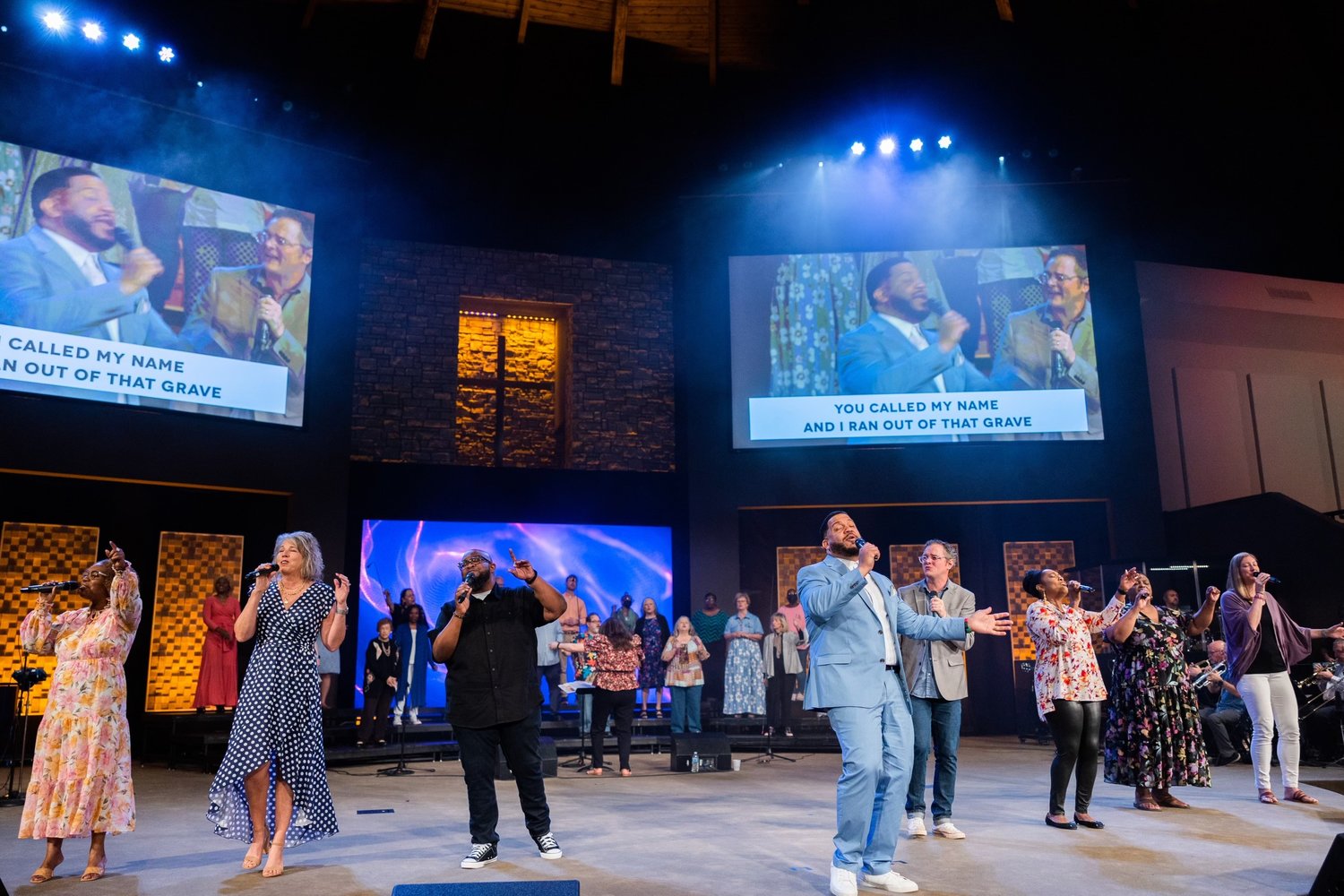 The praise team leads New Hope worshippers in song during a recent service.
Previous Next
Posted Thursday, June 2, 2022 10:51 am
By ROGER ALFORD, The Christian Index

FAYETTEVILLE, Ga. – Pastor Rhys Stenner recalls the day a small tree in his yard got crushed.

A crew of tree cutters had been called in to remove a fallen oak that was leaning precariously against an ash, creating a hazard that had to be dealt with.

“I told them, ‘watch out for that little tree; it’s my wife’s favorite,’” said Stenner, pastor of New Hope Baptist Church in Fayetteville. “Well, a branch smashed that little tree, reducing it to basically a stump, a trunk. But within three or four months, shoots appeared. And within a year, it was looking really good. Now, two years on, it’s majestic, twice as tall as it had been. We see what happened with that tree as a parable in that, during the pandemic, we were crushed, and now we’re seeing this wonderful growth.”

New Hope Baptist Church had seen 40 baptisms in 40 days. That number has since grown to 50 baptisms in 60 days, and more baptisms are scheduled.

New Hope, one of the Georgia Baptist Convention’s premier congregations averaging about 1,800 people in Sunday worship over the past decade, saw baptisms rise as COVID-19 cases declined and people became comfortable in public gatherings. Now, salvation decisions at New Hope are on pace to surpass pre-pandemic numbers  with a half dozen to a dozen people typically praying to receive Christ in Sunday services.

“We can’t particularly explain it,” Stenner said, “I pray it’s a move of God. It’s not a mighty flowing river, but we are excited by the momentum we’re seeing.”

JJ Washington, evangelism catalyst at the Georgia Baptist Mission Board, said churches across the state are reporting signs of revival similar to what New Hope is experiencing.

Earlier this year, more than 1,500 Georgia Baptists turned out for evangelism training sponsored by the Georgia Baptist Mission Board, an indicator, Washington said, that the state’s largest religious group is ready to put the pandemic behind and get back to soul-winning.

“We’re seeing renewed excitement in both the pulpits and the pews to win our state for Christ,” he said.

Stenner said COVID-19 had a dramatic impact on churches for the better part of two years.

“We’ve experienced a pruning, and we’re beginning to see the upside of that,” he said. “It’s springtime again.”

At New Hope, Stenner has seen “great joy” in the congregation as new believers surrender to Christ.

“Baptist churches are always at their happiest when they’re baptizing people,” he said. “There’s always joy in the house when you see that.”

The post-COVID turnaround at New Hope, Stenner said, came sometime around the first of this year.

“There were times when it felt like a long winter, and somewhere along about January, we suddenly felt momentum, like we had a breeze behind us,” he said.