Novel Germany waits as unofficial historian and Index Editor Gerald Harris autographs one of hundreds of books that were given away at the annual Convention meeting in November. JOE WESTBURY/Index
Posted Thursday, January 4, 2018 11:02 am
Joe Westbury

Novel Germany waits as unofficial historian and Index Editor Gerald Harris autographs one of hundreds of books given away at the annual Convention meeting in November. JOE WESTBURY/Index

A lot can happen in 45 years. Ask Gerald Harris, who recently completed writing an updated history of the Georgia Baptist Mission Board.

Harris, who has served as editor of The Christian Index for the past 15 years, lived through some of that history as pastor of two Georgia Baptist churches. He was a casual observer to some of it as pastor of churches in North and South Carolina, as well as Mississippi.

But today he is perhaps the only living expert on the highlights of the Mission Board’s legacy due to being totally submerged in the task over the past 26 months.

Harris took on the challenge based on the significance of what has occurred since the publication of the original history, which covered its founding in 1822 all the way to its sesquicentennial celebration in 1972. Three significant state executives, explosive growth in churches and evangelism, the birth of language missions/intercultural church planting as well as the growth of disaster relief ministry – and the state’s role in the Conservative Resurgence – are all packed into more than 700 pages in the hardcover book.

“It was a real learning experience for me, because I read multiple pages in every issue of The Christian Index covering the past four-and-a-half decades, as well as the Minutes of the State Convention. It was an excellent opportunity to learn about some of the outstanding leaders of the Convention as well as interview some of those who lived through the history,” he says.

For example, among those he spent time with are retired Georgia Baptist leaders Waldo Woodcock, Jerry Baker, Ernest Kelley, and current Executive Director J. Robert White, to whom the book is dedicated.

Renewed appreciation for quality of leaders

“I think the greatest appreciation that I came away with is the quality of leaders who have led the Convention for those pivotal years. They were noble men of high character who embodied the calling for the Convention to be an Acts 1:8 mission agency with a distinct ministry at home and extending around the world. 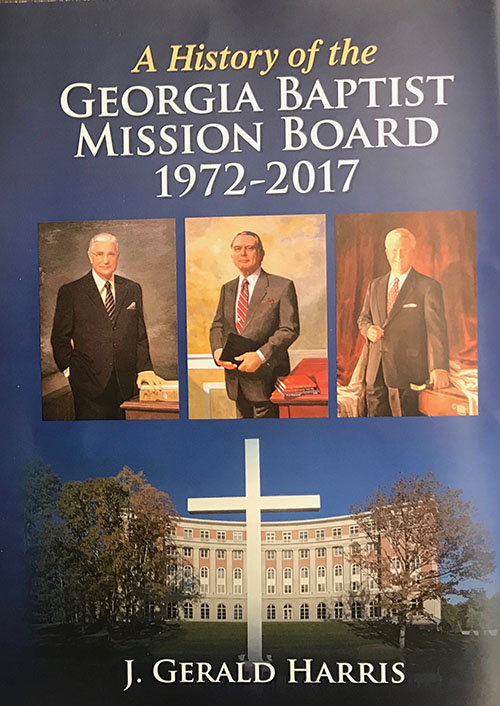 The updated history of the Georgia Baptist Mission Board is now available for purchase for $20, including shipping. JOE WESTBURY/Index

“It was also noteworthy to see the role that Georgia Baptists played on the national level, as well as on the state. Men such as Jerry Vines, Charles Stanley, James Merritt, Frank Page, Bryant Wright, and Johnny Hunt with strong Georgia connections not only served growing congregations but gave their time to serve as presidents of the Southern Baptist Convention,” Harris added.

But perhaps what distinguishes Harris’ book from more traditional histories is his weaving a healthy amount of anecdotes through the decades.

“I really enjoyed adding some spice, a little humor, and behind-the-scenes content that you don’t always find in history books,” he added.

In places his tome almost resembles a novel as he fleshes out what otherwise would be cardboard figures with real-life incidences. Sometimes his cast of characters laugh and cajole over predicaments in which they find themselves; other times they are shown as down-to-earth individuals struggling with problems while seeking spiritual direction.

“Many know some of these people as Baptist statesmen, but they were also husbands and fathers who were seeking God’s direction in their lives as well as that of the Mission Board,” Harris recalls. 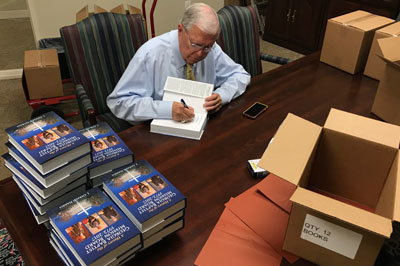 Harris signs one of more than 600 copies of the Mission Board's newest history in mid-November. JOE WESTBURY/Index

The book was all-consuming, requiring 15-20 hours a week for more than two years, in addition to his writing stories and editorials for The Index, managing its transition from an historic print newspaper to a 100 percent online publication, and maintaining a strenuous speaking schedule statewide.

Late nights and weekends were devoted to reading, editing, getting feedback from those reading first drafts, and then further editing and refining the manuscript. Like working on a giant quilt, Harris constantly dug deeply into historical archives and gained insight to more adequately flesh out the historical events. When possible he went straight to individuals who provided a first-person perspective of events that occurred decades ago.

Book is current through mid-November 2017

The book continues up to the very week when it was unveiled to Convention messengers, introducing those who allowed their names to be placed in consideration as president of the Convention. He also acknowledged the celebration honoring the 25th anniversary of Executive Director J. Robert White and his wife, Janice.

Copies, which would make excellent gifts or additions to church libraries or for agencies or institutions, are available for $20 each including postage. To purchase a copy of the book include a check, mailing address, and phone number to Georgia Baptist History Book, Georgia Baptist Mission Board, 6405 Sugarloaf Parkway, Duluth, GA 30097.

All proceeds go to further the work of Georgia Baptists reaching the world through Mission Georgia.