Nick Salyers: What it’s like to try out for the Rio Olympics

Nick Salyers would have liked to been a member of the U.S. Olympic swim team for the upcoming games in Rio but counts his faith in Christ to be the real focus of his life. NICK SALYERS/Special
Posted Tuesday, July 19, 2016 10:58 am
Gerald Harris

Nick Salyers would have liked to been a member of the U.S. Olympic swim team for the upcoming games in Rio but counts his faith in Christ to be the real focus of his life. NICK SALYERS/Special

ATHENS — Few people can imagine what is required of an athlete aspiring to become a part of the U. S. Olympic Team. The time, discipline, dedication and physical demands upon an Olympic hopeful are mind-boggling.

Nick Salyers, a scholar/athlete who has excelled on the University of Georgia Swimming and Diving Team, decided to compete for a spot on the U. S. Olympic Swim Team.

Nick was born in Roswell, the son of David and Lynn Salyers. He is a versatile swimmer, specializing in sprint freestyle, butterfly, but has recently excelled in backstroke events. He swam for Swim Atlanta, attended Wesleyan High School where the University of Georgia recruited him for their collegiate swim team.

“I started swimming competitively at the age of nine;” Salyers admitted, “And I have been swimming almost every day since then. At the age of 12 I had the opportunity to attend the 2008 Olympic Trials as a spectator, and it was during that week that I set a goal for myself to one day compete in the Olympics.

“I missed my Olympic Trials cut by four tenths of a second (0.40) in 2012, and then started my collegiate swim career at the University of Georgia and qualified for the 2016 Olympic Trials, achieving the goal I had set for myself 8 years ago.

“Once I finished classes I grab lunch, take a quick nap if I’m are lucky and then off to practice #2 from 2:45-5:00 pm. After that second practice I would eat dinner and then hit the books. 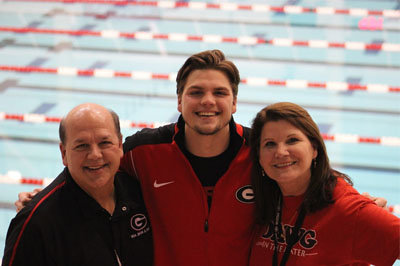 Nick was born in Roswell, the son of David, left, and Lynn Salyers. NICK SALYERS/Special

“We swim on average 6,000 to 7,000 yards at each practice session. I actually recorded the number of yards that we swim in a year and it is over 2 million yards, which is over 1200 miles. So over four years of swimming at UGA I have done enough swimming to cross the Atlantic Ocean (3,716 miles) and get part of the way back.

“In addition to swim training and weights we also did what swimmers call “drylands” where we do circuit training and calisthenics, sometimes we do stadiums climbs in Sanford Stadium.

“Furthermore, we do many things to help our training and performance on the recovery and nutrition side. We work closely with our nutritionist to maintain a healthy diet keeping us well fueled for all the calories we burn as well as the appropriate nutrients needed for proper recovery.

Recovery techniques as important as training

“We also take advantage of recovery techniques such as massages, ice baths and cupping (a therapy believed to mobilize blood flow to promote healing) as well as trying to get enough sleep.

“Being a college athlete in any sport at any level takes a significant amount of discipline, determination, perseverance and sacrifice. But swimming is an especially demanding sport and competing on the division 1 level and in the SEC adds a significant level of intensity. Our coaching staff holds us accountable to the level of excellence we are trying to pursue, by demanding the most of us every day and challenging us with every practice.”

Did Salyers training pay off? Ultimately, you would probably have to agree that it did. He placed 145 out of 200 swimmers in his event and explained that only those who finish first or second in any event qualify for the Olympic games. However, only the top one percent of all swimmers in the U. S. qualifies to participate in the Olympic Trials. Salyers added, “I was so happy and humbled just to be included in that incredible group.”

The key to Salyers’ character as an athlete, however, is firmly rooted in his statement of faith. He exclaimed, “Christ is everything to me. Although I have been a Christian since I was six-years-old, I didn’t always understand how my faith was to be applied to my sport. But I had an awesome opportunity to attend a camp for college athletes after my freshman year of college called the Ultimate Training Camp (UTC). At UTC they spend a week looking at how faith and sports work together. They teach five principles that paint a clear picture of how the Gospel applies to sports.

“After that intensive teaching and training they let you practice these principles in an intense game-like situation called the SPECIAL. That camp was huge for me in understanding my role as an athlete and chasing my perspective on how I view sports. Coming away from that camp I was able to see how my sport is unique opportunity for me to glorify God every single day.

“Swimming then became an avenue for me to reach my teammates with the Gospel. Through UTC I found my identity firmly rooted in Christ not my performance in the pool. This gave me confidence, relief, and peace when the pressure, intensity, and demanding schedule of collegiate athletics threw challenges my way.

Support from the Christian community

“The pursuit of something so much greater than myself gave me the perseverance to continue on even in great struggle or trials or pain. The Christian community that I found in college and my family encouraged me and supported me throughout my entire swim career.”

Nick attended North Point Community Church most of his life, but in college attended Calvary Bible Church, a church plant in the Sarepta Baptist Association where Thomas Settles is pastor. The UGA swimmer has also been extremely involved with the athletic ministry at the University called Team United.

Salyers plans to finish his degree in marketing this fall, become an entrepreneur and develop a business with his father.