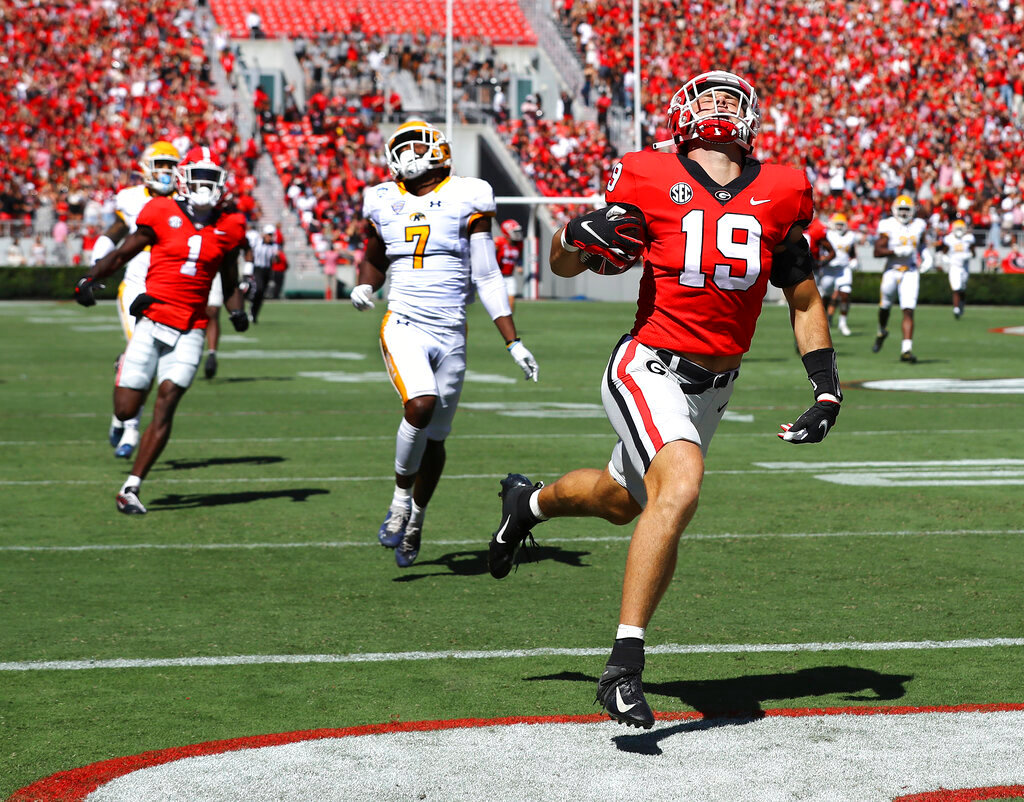 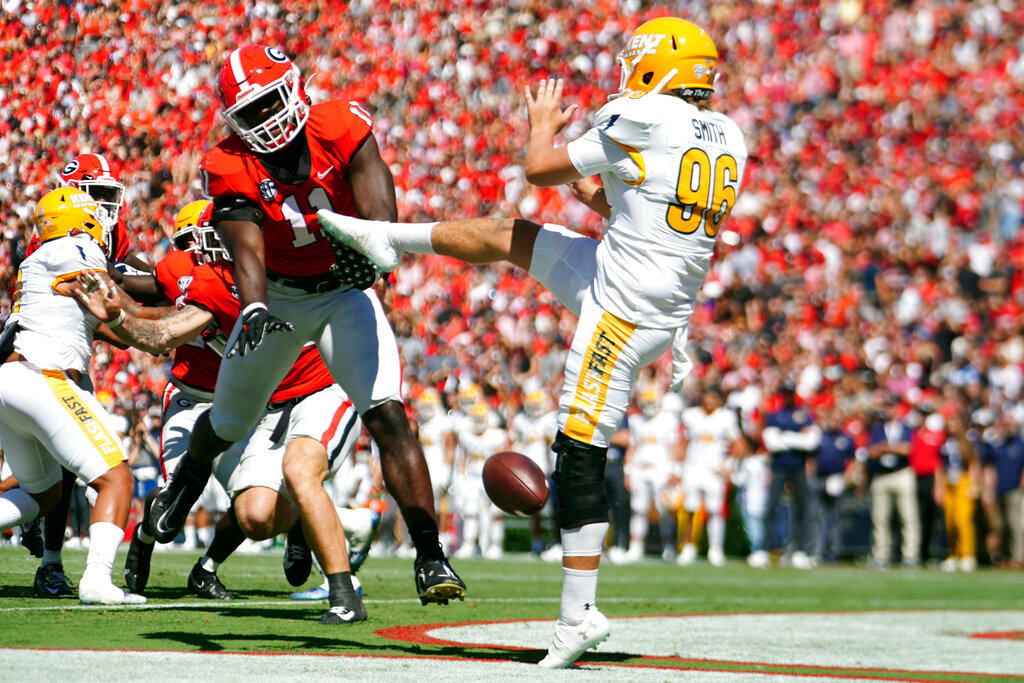 Georgia linebacker Jalon Walker (11) blocks a punt by Kent State's Josh Smith's in the first half Saturday, Sept. 24, 2022, in Athens, Ga. The ball went out of the end zone for a safety. (AP Photo/John Bazemore) 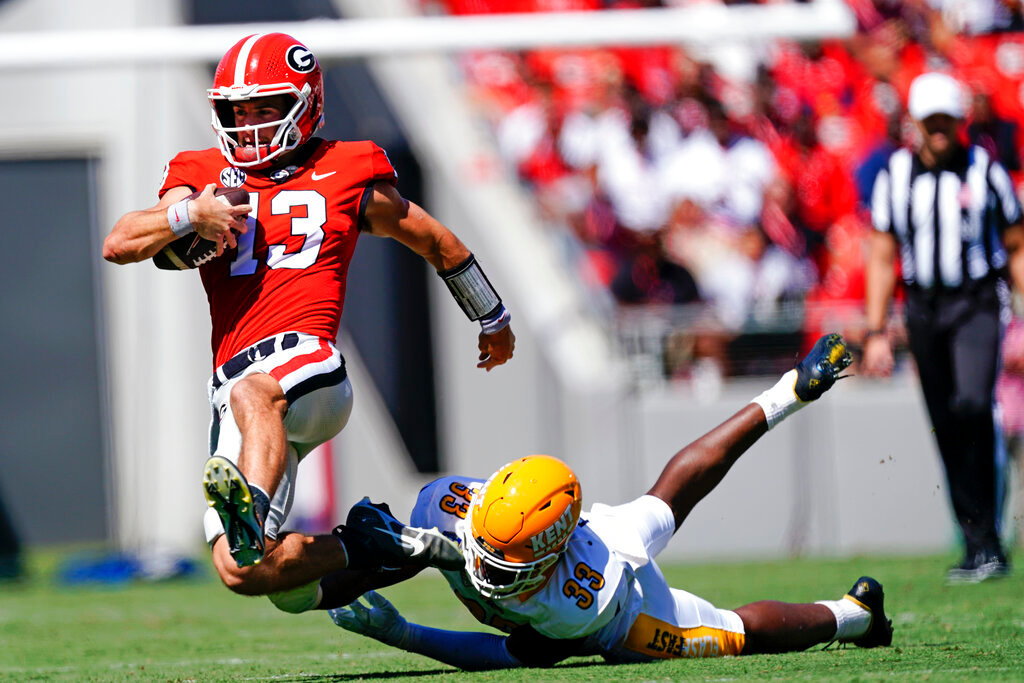 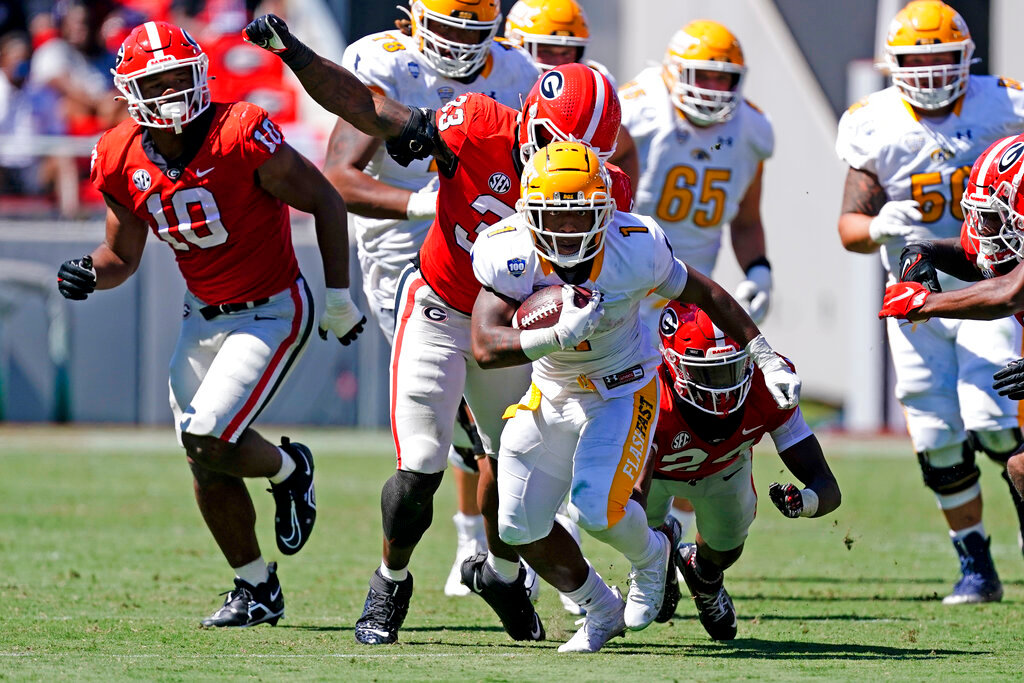 The No. 1 Bulldogs ultimately prevailed, holding on for a 39-22 victory Saturday, but their two-week run atop the rankings could be in jeopardy.

The Bulldogs (4-0) turned it over three times, struggled in the red zone, were burned on a fake punt, and gave up several big plays to Kent State (1-3) in what was easily their worst performance of the season.

Was it bad enough to knock Georgia out of the top spot in the rankings? Check back Sunday.

“We don’t care too much about the rankings," defensive lineman Nazir Stackhouse said. "We focus on us. It’s always a ‘we’ thing. We’re always focused on our development as a team, no matter where we are in the rankings.”

Kent State had a chance to make it a one-score game with less than 13 minutes remaining after Marquez Cooper powered in from the 1 to cap a 12-play, 75-yard drive. But a two-point conversion failed, leaving the Bulldogs with a 32-22 lead.

Georgia then finished off the Golden Flashes, driving 75 yards for Kendall Milton's 1-yard plunge on fourth-and-goal with 5 1/2 minutes to go.

Georgia coach Kirby Smart insisted that he wasn't all that displeased with his team's performance. He pointed out that the Bulldogs never had to punt, blocked a punt for a safety, and finished with a 529-281 edge in total yards.

But Georgia has plenty to clean up.

“The fake punt is like a turnover,” Smart said. “When you have four turnovers, you're gonna have a game like that.”

Fortunately for the Bulldogs, they have Bowers.

Coming off a three-touchdown performance against South Carolina, he took it to the end zone on the second play of the game with a dazzling 75-yard run.

Going in motion to take a handoff, the sophomore tight end found a big hole around right end and never stopped running, turning on his impressive speed down the sideline in front of the Georgia bench.

Bowers also scored on a 2-yard scamper, making it three touchdowns on three carries this season for the sophomore tight end.

Or maybe he should be listed as a running back.

“I guess I'm a tight end,” Bowers said. “But I just line up wherever they tell me.”

Bowers strengthened his credentials as one of the nation's most dynamic offensive players.

“What a weapon he is," Smart said. “He can line up and play just about anywhere.”

But Bowers was the exception for the Bulldogs on this day.

Ladd McConkey lost a pair of fumbles, one on a punt return when he probably should have called for a fair catch, another after being stripped on a catch catching a pass in Kent State territory.

Stetson Bennett threw his first interception of the season, though he did score on a 1-yard dive, sticking the ball across the line while falling on his back with 8 seconds left in the first half to put the Bulldogs up 26-13.

Georgia settled for three field goals by Jack Podlesny after driving inside Kent State's 20-yard line, which allowed the Golden Flashes to hang around.

Kent State was facing a team currently ranked in the AP Top 25 for the third time in its first four games, having already lost to No. 18 Washington and No. 6 Oklahoma.

This figured to be their toughest test yet. But the Golden Flashes actually made things tough on the Bulldogs, who came in as 44 1/2-point favorites.

“I’m really pleased with the way that our kids fought,” Kent State coach Sean Lewis said. “We have a really talented ball club that has gone through tremendous adversity and conflict in the month of September. They embraced it and got better because of it."

Kent State became the first team all season to score a touchdown against Georgia's first-team defense when Devontez Walker hauled in a short pass from Collin Schlee along the sideline and took it 56 yards to the end zone.