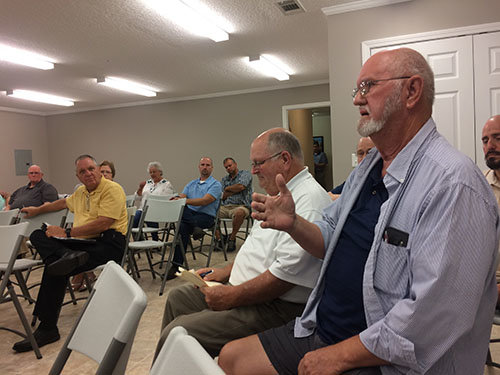 Larry Altman gives his input on establishing a local ministry for those trying to recover from drug addiction. To his right sits Don Patterson, associational missionary for Piedmont Okefenokee Baptist Association. SCOTT BARKLEY/Inde

WAYCROSS — They've seen the reports. They know what's at stake. And they want to do something.

More than two dozen pastors and laypeople representing a dozen area churches gathered at the Piedmont Okefenokee Association building Aug. 15. There, they discussed the possibility of establishing a local recovery ministry for those fighting drug and alcohol addiction. Nine days later, the Association's administrative team recommended that up to $10,000 be made available for the effort.

"You can't fix a problem, you know you have a problem," Pastor Jerry Weathersby of Community Baptist Church in Waycross stressed to the crowd.

The decision comes at a time when the opioid epidemic cannot be ignored, and rural areas such as those in southeast Georgia are being hit hardest. A devious concoction of economic instability, social stress, and high level of doctor-prescribed painkillers over the past decade has left those parts of the country particularly susceptible, say experts.

"A lot of those men … have children. And I'd dare to say that out of our area we have 1,200-1,400 children that are fatherless because dad's in jail," he said. Asked later if the program would only be for men, Weathersby confirmed that to be the case at first, with eventual plans to also treat women.

According to the Federal Bureau of Prisons, 46 percent of the inmate population got there through drug offenses. The next-closest category? Those arrested on weapons/explosives/arson charges, at 17 percent.

It's unclear just how many burglary, sex offenses, extortion cases, et al directly connect to drugs, but no one doubts it's a high number. Case in point: The National Association of Drug Court Professionals claims that 80 percent of inmates abuse alcohol or other drugs and half are clinically addicted. At the time of their arrest, 60 percent tested positive for illicit drugs.

Nationwide, overdose deaths due to drugs continue to rise. In Georgia, 25 percent of all overdose deaths in the state so far this year has involved the highly-addictive and dangerous opioid fentanyl, according to information sent to The Index by the Georgia Bureau of Investigation.

Piedmont-Okefenokee Association's plans are to partner with Set Free, an addiction recovery program that places discipleship at its center.  In addition, Jim Burkhardt, a deacon at Weathersby's church, presented statistics for the need of a recovery program where price wasn't an obstacle.

"The program is free. There's a lot of people in need out there, but there's no money in the family to help them. So, they can come. In the first … 30 days their cell phones are taken and they have no contact, spending time in Bible study four or five times a day.

"They're really getting saturated in God's Word."

At its Aug. 24 meeting, the Association made two recommendations, actually. The first called for a $10,000 allocation "be made available to assist a recovery ministry based within one of the six counties where churches of the Piedmont Okefenokee Baptist Association are located."

The second dealt with establishing a "recovery fund" for future needs of the ministry. The Association's administrative team will oversee the fund and its contributions. The recommendation stipulates that the administrative team controls disbursements of the fund. And although the association may consider recommendations from anyone, it's not bound to honor those recommendations. In other words, donors don't dictate which individuals benefit directly from the fund.

Mark Yeatman, director of Set Free, planted a church in Yulee, FL as part of the Northeast Florida Baptist Association in Dec. 2013. Previously, he'd done the same thing in Wyoming. At the Aug. 15 meeting members talked about the prospects, since approved, of partnering with Set Free.

"We're serious about this," Associational Missionary Don Patterson told the group. "And we all understand this is a process." 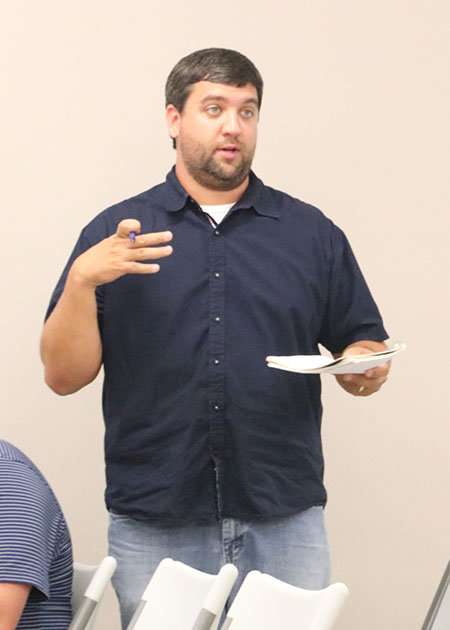 Chris Roberts, lead pastor at Bridge Community Church in Blackshear, addresses those at the Piedmont Okefenokee Association building Aug. 15. The meeting came about due to a desire by local churches to establish a recovery ministry somewhere in the six-county area of the Association. SCOTT BARKLEY/Index

Every church has a need

Participants acknowledged the importance of getting past taboos in discussion addiction in the church. Drug addiction doesn't choose victims.

"I guarantee you every church in our association has a need for somebody to work with them in the area of drug recovery," said Patterson. "Every one of them.

"They might not have the courage to announce it and say it, but it is there."

The recovery model planned by the Association, Patterson explained, also deals with addiction in other areas, not just drugs. In relation to that, one audience member pointed to the backbone of the entire recovery process.

"These men are going to need someone to disciple them," stated Larry Altman, a member of Whosoever Community Church in Brantley County. "We take things for granted they don't like work ethic. To do nothing is unacceptable. I'm going to be obedient to God."

The effort for effectiveness

Altman cited his previous experience as an addiction counselor and chaplain at the Brantley County Addiction Center  in estimating up to 95 percent of those with whom he'd worked were in jail from drugs or drug-related offenses.

Early on Aug. 15 Altman drove a young man to a recovery center in north Atlanta. Then, he met a friend for lunch. After that, he turned around and made the five-and-a-half-hour drive directly to the Association building in Waycross for the meeting.

Establishing a recovery center requires such effort. Inconvenience will peck at your calendar and say you don't have enough time. However, on this night testimonies recounted personal struggles or feeling the direct effects of addiction. In turn, those same testimonies pointed to a path for healing, and recovery.

Patterson testified how recovery doesn't come easy, nor without some help.

"You can never be effective in any ministry," he said, "until people know that you genuinely care about them."