DULUTH — James K. “Jamie” Dew, the announced nominee as the next president for New Orleans Baptist Theological Seminary, will be one of the general session speakers at both GO Georgia events in August.

Dew, currently dean of the College at Southeastern Baptist Theological Seminary where he also teaches Philosophy and the History of ideas, will be the Saturday morning session speaker on Aug. 17 at First Baptist Jonesboro and Aug. 24 at First Baptist Statesboro.

Dew will be presented to the full trustee board on June 5 for a vote. Frank Cox, senior pastor of North Metro Baptist Church in Lawrenceville, served as the chairman of the search committee.

"As a committee, our focus has been to find the heart of God and the man that God has chosen for this role," said Cox as reported by Baptist Press. "After much prayer and research, we have been led to unanimously nominate Dr. Jamie Dew.

"It is our firm conviction that Dr. Dew embodies the DNA of New Orleans Baptist Theological Seminary," Cox said. "We believe he will make a great president and will bring out the best in the next generation of Southern Baptists."

Chuck Kelley, who announced in October 2018 that he will retire on July 31, has served as NOBTS president for 23 years.

Our story as part of The Story

After graduating from Louisburg College in North Carolina and Toccoa Falls College in northeast Georgia, Dew earned a Master of Divinity degree in pastoral ministry and a Doctor of Philosophy degree in theological studies from Southeastern. He will graduate in July with his second doctor of philosophy degree – one that focuses on the philosophy of the mind and philosophy or religion – from the University of Birmingham in Birmingham, United Kingdom.

Dew’s interest in applying philosophy to the Christian life began as pastor of Stony Hill Baptist Church in Wake Forest, North Carolina, he told The Index.

“It was through doing evangelism that I encountered skeptics who questioned their faith,” he said. “I was also around death often, so those issues forced me to think deeply about philosophy and how to answer those types of questions about life and death.”

The theme of GO Georgia will be “Storytellers,” with the theme verse of Ps. 78:3-4 – “Stories we have heard and known, stories our ancestors handed down to us. We will not hide these truths from our children; we will tell the next generation about the glorious deeds of the Lord, about his power and his mighty wonders.”

One’s testimony can be powerful in sharing that story of the God's work, said Dew.

“Traditionally, apologists and Christian philosophers have been skeptical about using personal stories out of fear of it being too subjective,” he noted. “Nevertheless, our personal stories of how we came to faith and how we encounter God throughout life continue to be one of the most persuasive ways of engaging non-believers.

“Today, I think there’s a greater openness to one’s testimony.”

A ‘God moment’ at every meeting

Although the presidential search committee carefully reviewed 20 candidates that included three African American nominees and one Hispanic, they felt a connection with Dew.

“When we sat down with him the first time, we had a God moment as a committee,” said Cox. “"We realized that God had His hand on Dr. Dew. Every time we met with him, we became more convinced that he was God's man for NOBTS."

All candidates were considered equally regardless of age or ethnicity. An African American candidate, Cox said, was among the four finalists and interview extensively by the committee. The top candidates ranged in age from 42 to 63.

A member of Southeastern’s faculty since 2011, Dew has directed the word of the College at Southeastern since 2014 and served on the SEBTS president’s cabinet. In 2014, his role expanded to vice president for undergraduate studies and distance learning.

A change in the culture

Dew was asked about the methods of communication – in particular, social media – that have changed the way many share their story of coming to Christ with others. 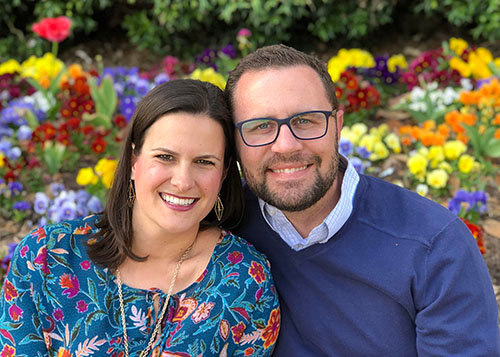 Jamie and Tara Dew have been married for 18 years. Jamie Dew currently serves as dean of the College at Southeastern and as vice president for undergraduate studies and distance learning at Southeastern Baptist Theological Seminary. Tara Dew has earned a Doctor of Education degree from SEBTS. BP/Special

“They have in drastic ways that we have perhaps not fully appreciated,” he said. “People are far more prone to buy in to short, pithy statements that pack a punch than by long, drawn-out, rational arguments. Positively, people are more drawn to what they think is beautiful than to what is rational. Negatively, people are deeply moved by what they fear or think is embarrassing or shameful. As such, social media taps into these natural human dispositions in profound ways.”

As God’s story is told to others, we are invited to join it through a relationship with Christ. In turn, one’s view of the Bible plays a key part in how we interact with the culture, he stated.

“We’re to take the theology that flows from the Word to others and embed it in our culture” Dew said. “While we must be wise in our attempts to contextualize the message of the Gospel, we must remain faithful to what is set before us in Scripture.”