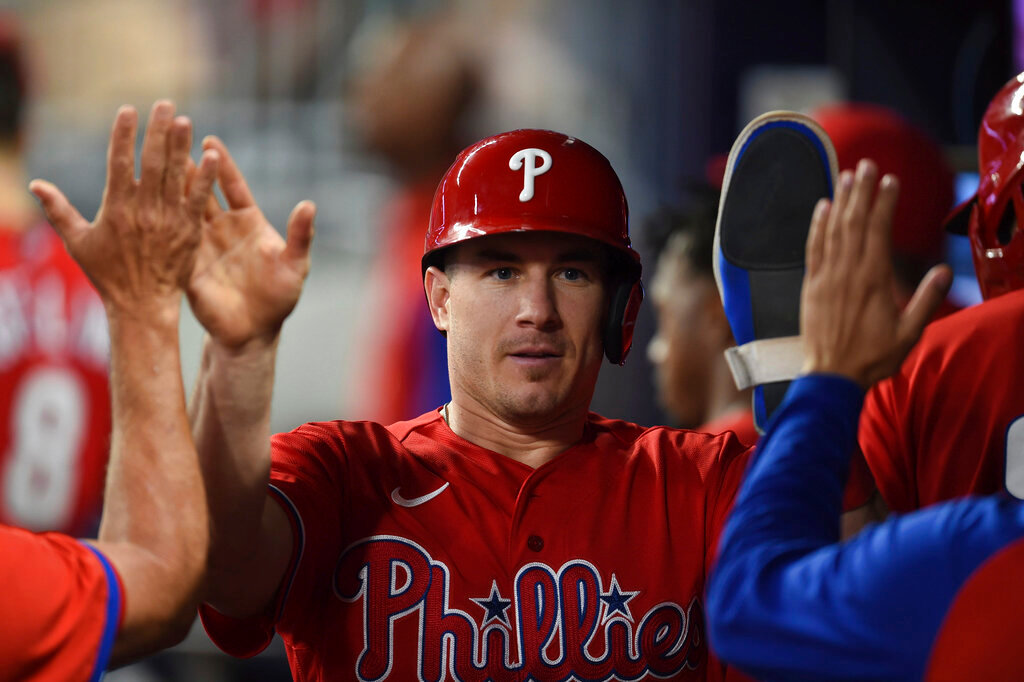 Philadelphia Phillies J.T. Realmuto high-fives teammates after scoring on double by Odubel Herrera during the seventh inning against the Atlanta Braves on Thursday, May 26, 2022, in Atlanta. (AP Photo/Hakim Wright Sr.) 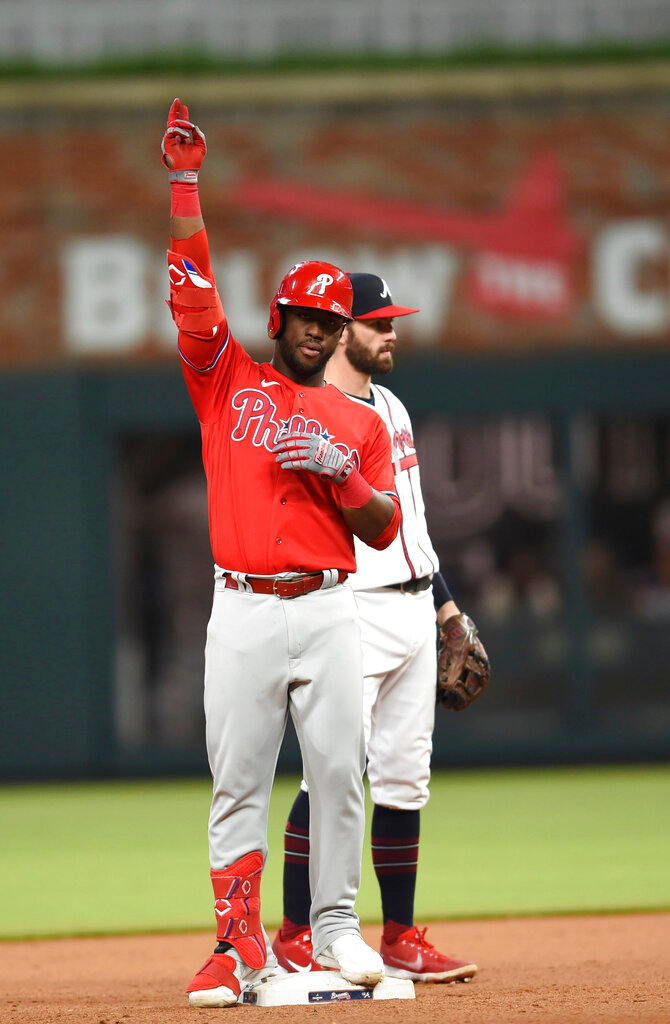 ATLANTA (AP) — Aaron Nola struck out 10 while pitching shutout ball into the ninth inning for his first victory since opening day, leading the Philadelphia Phillies over the Atlanta Braves 4-1 on Thursday night.

J.T. Realmuto homered as the Phillies prevented the World Series champion Braves from posting their first three-game winning streak of the season.

Philadelphia had lost each of Nola’s last eight starts, but he had a 3.69 ERA over that stretch. He did little wrong against the Braves, allowing one run and five hits in 8 1/3 innings.

Nola (2-4) had dropped four straight starts at Truist Park and entered with a 6.60 ERA with eight homers allowed over his last six starts in Atlanta.

Nola struck out Matt Olson with runners on first and third to end the third and retired his next seven batters. Olson doubled with two outs in the sixth before Nola retired Travis d’Arnaud on a grounder.

In the ninth, Nola struck out Austin Riley before giving up a double to Olson that chased him. Nola fell two outs shy of his fourth career complete game, his third career shutout and his first of both since April 18, 2021, at home against St. Louis.

Corey Knebel got the final two outs in relief. After retiring d'Arnaud on a grounder, Knebel threw a wild pitch that scored Olson. William Contreras walked, and Adam Duvall struck out to end it.

Atlanta fell to 21-23. The last time the Braves went this far into the season without three consecutive victories was in 2001.

Kyle Wright (4-3) retired the first six batters before Realmuto connected. It was Realmuto’s third homer, traveling 414 feet, and it gave the Phillies a 1-0 lead.

The Phillies looked as if they would put together a big inning after Realmuto homered. Rhys Hoskins’ single loaded the bases with no out, but Wright escaped the jam by striking out Alec Bohm and getting Bryce Harper to ground into a double play.

Harper, the two-time NL MVP who entered with a .545 average, five homers, nine doubles and 13 RBIs in his last 10 road games, finished 1 for 4. He singled in the eighth and scored from first on Nick Castellanos’ double to make it 4-0.

Wright retired 14 straight batters before Kyle Schwarber walked and Realmuto was hit by a pitch in the seventh. He was charged with three hits and three runs after reliever Will Smith gave up a two-run double to Odúbel Herrera to make it 3-0 in the seventh.

Wright had gone 0-2 with a 5.56 ERA in his previous two career starts and one relief appearance against Philadelphia.

2-time Wimbledon champ Murray loses to Isner in 2nd round