North Ga awakening coming from what is found, not what was lost 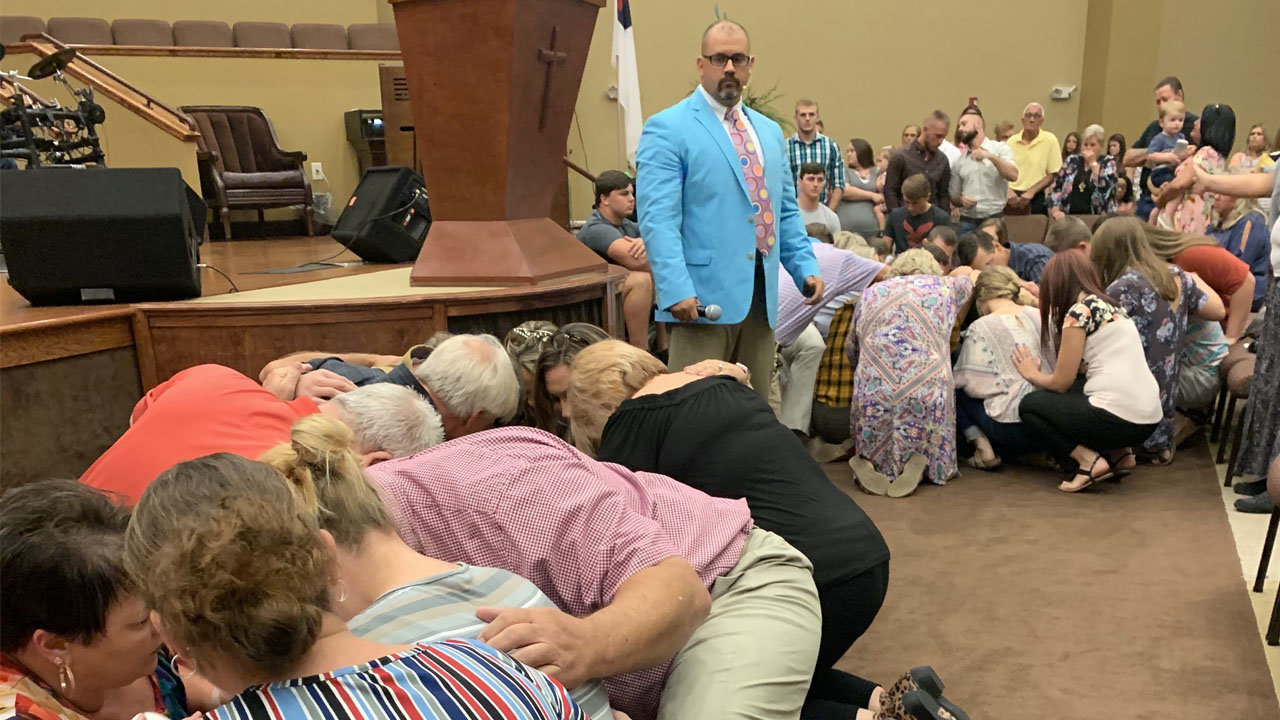 Pastor Shane Parrott, blue jacket watches as people respond to the altar at Heritage Baptist Church in Calhoun on Sunday, Sept. 29. On that day the church would baptize seven with three others praying for salvation in Christ. SCOTT BARKLEY/Index
Posted Tuesday, October 1, 2019 8:28 am
Scott Barkley

Pastor Shane Parrott watches as people respond to the altar at Heritage Baptist Church in Calhoun on Sunday, Sept. 29. On that day the church would baptize seven with three others praying for salvation in Christ. SCOTT BARKLEY/Index

CALHOUN — Heritage Baptist Church has revival services scheduled for Oct. 6-8. But about a month ago, Revival decided it didn’t feel like waiting.

If you know the church’s recent history you’d be tempted to connect a recent tragedy to the stream of visitors, lengthy play-through-the-invitation-song-twice altar call responses, and lines passing through the baptistry. 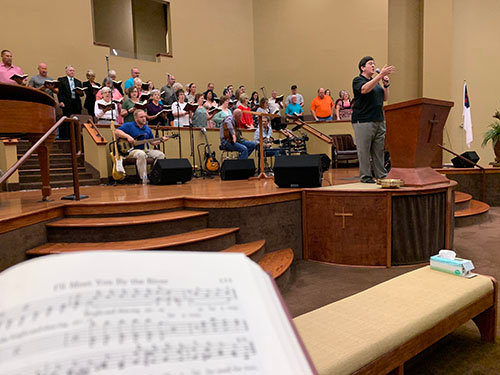 In July Pastor Brent Davis, who founded the church in 2009, died from a heart attack. Davis was only 51 and a traumatic event like that tends to wake people up, make them take a hard look at eternity.

However, making a direct connection would be highly inaccurate and even insulting to Davis, says Shane Parrott.

Only eight months prior to his best friend’s death, Parrott had agreed to be Heritage’s minister of education. After he and his family joined the church a couple of years since its founding, Parrot eventually became a Bible study leader and basically an associate pastor in everything but title.

So on Sunday when asked in the church office – where he and Davis had matching desks – to explain what’s happening at Heritage, Parrott looks with a directness fashioned from 22 years with the Gordon County Sheriff’s Office and gives a simple answer.

Taking a look at yourself 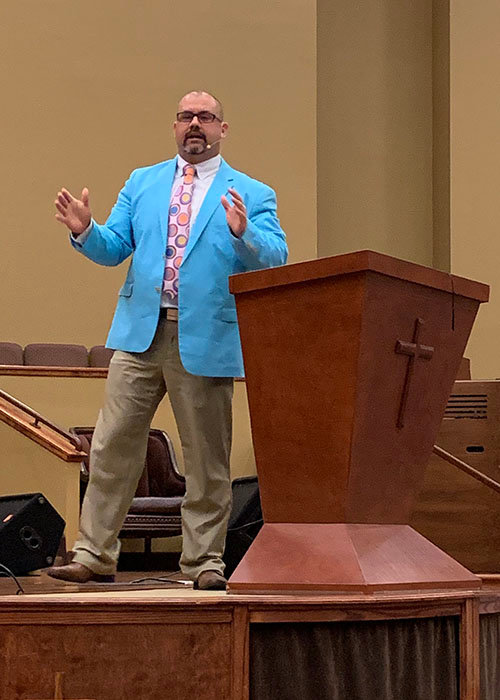 “For 20 years I thought I was saved,” he said. “Then, in 2015 we had Bailey Smith here preaching a revival. He was very blunt about how we need Jesus no matter our background. There were around 80 people at the altar that night; 38 got saved. At the end of it I was asked to close us out in prayer. When they handed me the microphone, I told everyone how I had just been saved.”

Parrott’s experiences as an officer influence his way of thinking about evangelism. “I’ve stood over a lot of dead people, wondering where they’re spending eternity. In my career I was part of two shootings. Things like that make you take a look at yourself,” he stated.

Prayer and witnessing have always been part of Heritage’s core. About a year ago the church began Witnessing Wednesdays the first week of every month. Members would focus on homes near the church, but also share the Gospel at other places like the outlet mall just beside I-75. Recently they began an effort called “Fill the Cracks.” Through it, members pray over every seat and space at the church throughout the week.

“Every day someone is praying for those places,” said Parrott. “If given the chance, the devil will try and fill a vacuum. We have around 50 signed up for it. Those who can’t be here pray at home.”

In the last four weeks, the church has seen 20 salvations.

Sunday, Sept. 29 was a day that is becoming normal at Heritage Baptist Church. Worship attendance typically runs around 500, but there are a lot of visitors. Anyone who wants to be part of the choir is invited up on stage to do so.

Parrott appears in the baptistry and proceeds to baptize the first of seven individuals. One is a teenage girl. The next one her father. Another one is a gentleman in his 60s. Parrot’s 65-year-old aunt passes through the waters. The pastor steps aside for the last one to be baptized by David Dickerson, who momentarily had laid down his guitar from playing with the worship band. Dickerson explains how years earlier he baptized a young man. Today would be the day he baptizes that man’s son.

But, he points out, it took the devotion of many to show the young man who Christ is. It required a long-term view of living out and sharing the Gospel. Later in his sermon, Parrott talks about how accepting the Gospel and salvation through Jesus is a discovery. It's finding something that was probably right in front of you for a long time, only you never saw it. It's a gift for whoever wants to accept it.

"I look around this congregation and I see a lot of 'whoevers,'" he proclaims. "I was one."

Not by a script

“I’ve never met anyone like him,” says Parrott of Davis. “Along with Jesus and my family, he was someone I felt loved me unconditionally.”

Davis’ absence led to a particularly tough message delivered by Parrott to the church on Sunday. The previous days had been a battle, he confessed. He repeated his love for Davis and his family. But the time had come to look to the future. It was time, he said, to move on. 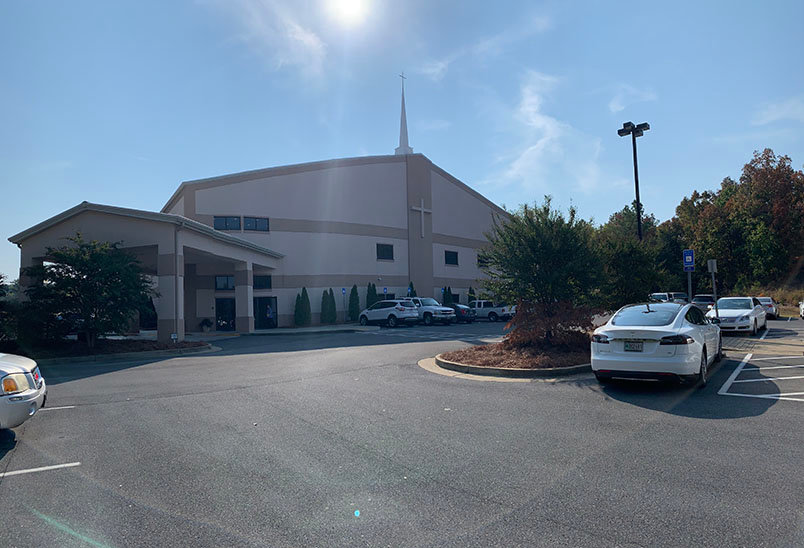 Heritage Baptist Church moved into its current location in 2012 after meeting in a condo unit and building that once housed a grocery store. Currently plans are being made to increase space to accomodate growth. SCOTT BARKLEY/Index

By no means was this meant to forget their former pastor, but to look forward in how he had led the church. Keep Jesus as the focus, not an individual. “Nothing has been accomplished here but by the love of Christ,” Parrott preached. “We don’t go by a script.”

No they don’t. In many ways Heritage is a traditional church. Parrott preaches wearing a jacket and tie. They use the burgundy Church Hymnal books. Sunday School is still called Sunday School.

But, Parrott is prone to break out a bright blue jacket as he did on Sunday. The hymns are accompanied by a guitar, bass, and drum kit. Every Sunday School class is also shared through Facebook Live. 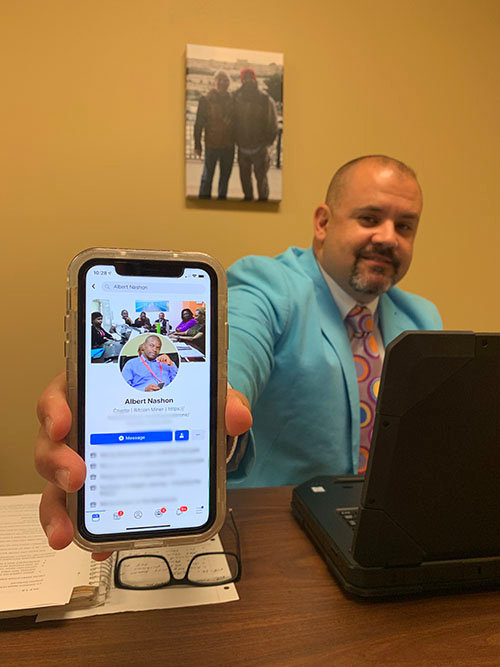 Pastor Shane Parrott of Heritage Baptist Church holds up the Facebook profile of Albert Nashown from Nairobi, one of the thousands of viewers the church reaches through Facebook Live in its Sunday School classes and worship times. Behind Parrott on the wall is a photo of him with recently-deceased pastor Brent Davis. SCOTT BARKLEY/Index

“We encourage every class to have their own Facebook page. They broadcast from there,” says Parrott. Many of those watching click over to the church’s Facebook Live broadcast of its worship service. With that many using the technology, Heritage has taken steps to strengthen its wifi capability.

Parrott says those measures have led to up to 4,500 more viewers joining congregants each week. People have been saved watching from other states. Albert Nashown of Nairobi, Kenya has become a faithful viewer and friend, watching from Africa with his family and members of his village, adds Parrott.

“We all miss him,” Parrott said earlier, “but I’m amazed at how they’ve moved forward. “If our church had fallen apart after Brent died, he would not have done his job. But they’re still reaching others for Jesus.”

On Sunday, the invitation begins and people begin to walk the aisles. Others join them. Tears flow and hugs abound. Parrott walks, welcoming them to life change. When it’s obvious two verses won’t suffice for the time needed, he motions for the band to keep singing. After they sing through all three verses again, he turns and tells them to just play. All told, it’s been around 10 minutes since his closing prayer and people are still at the altar.

Preparation for revival has been a long time coming. The dates on the calendar, though, mark revival services as starting Sunday, Oct. 6. That day – when Parrott has challenged the church to have 500 in Sunday School – former Southwestern Seminary President Paige Patterson will preach both the morning and evening services. Herb Reavis, senior pastor of North Jacksonville Baptist Church in Florida, will preach Monday, Tuesday, and Wednesday evenings.

About 15 minutes after the invitation comes to a close and most worshippers have left, Parrott is approached by a pretty blonde, smiling and saying, “It had to be said.” It’s Jennifer Davis, Brent’s widow. Standing nearby are his two young daughters.

“Of course I miss him,” she adds, “but there are great things in store for this church. Brent would be the first to tell us it’s not about him, but about Jesus.”