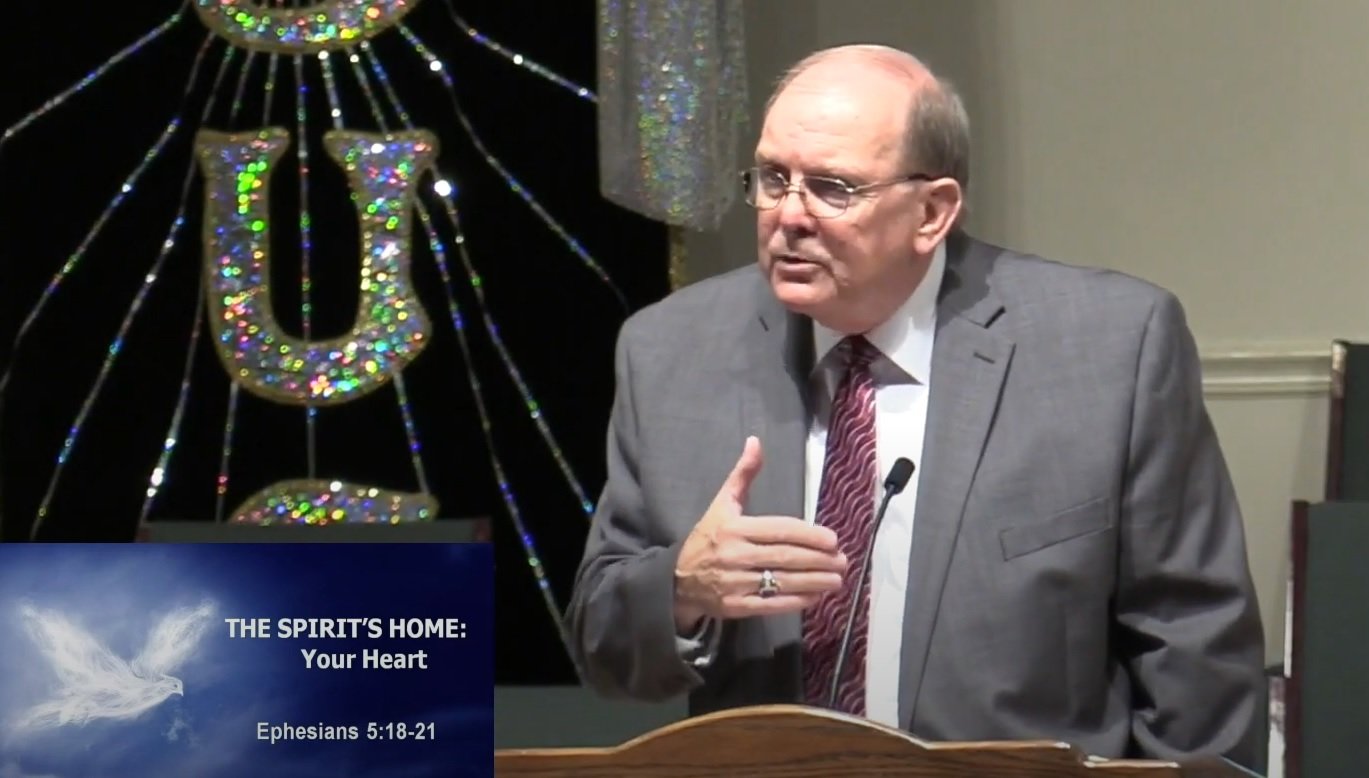 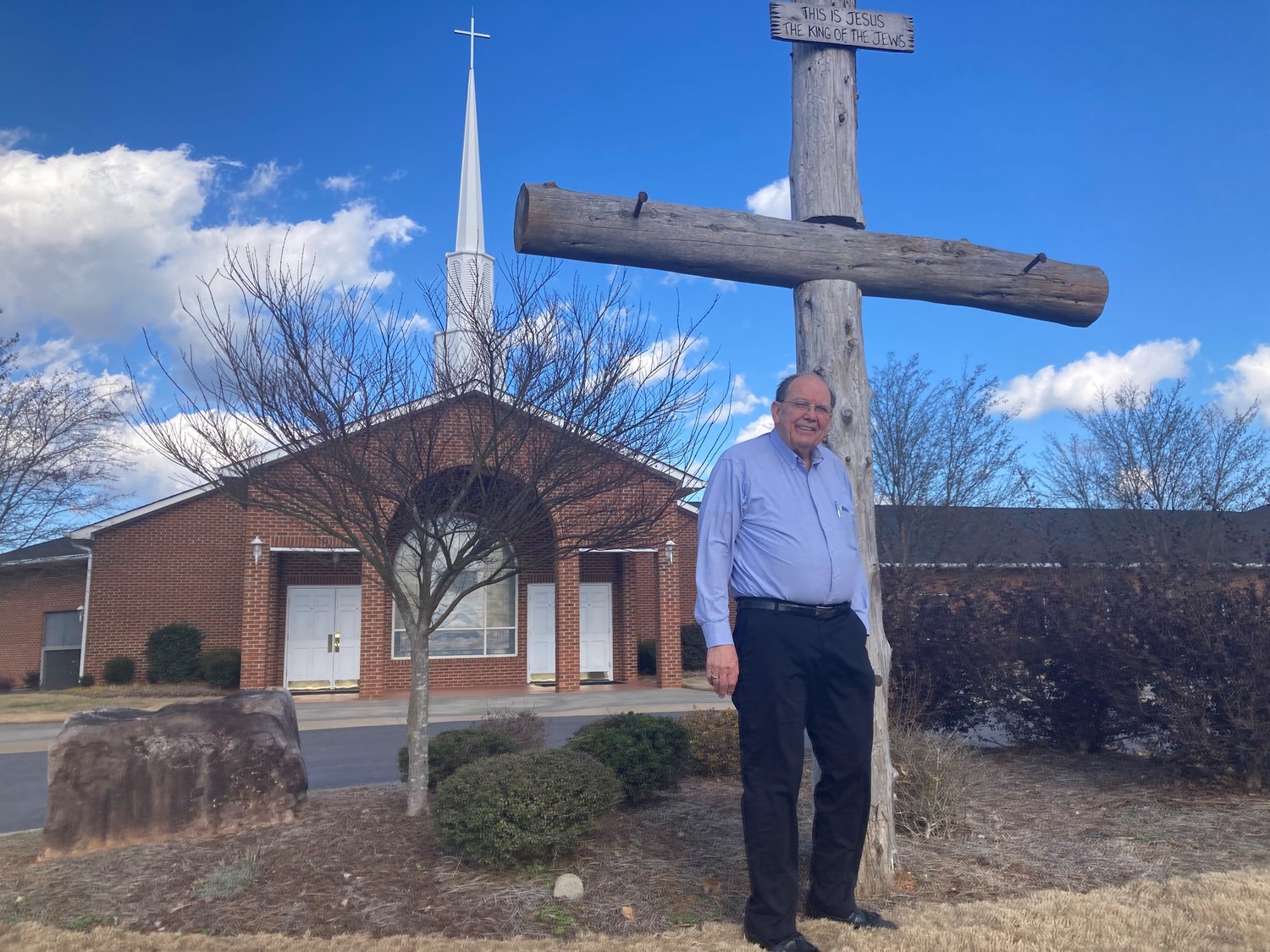 Pastor Terry Meeks poses for a photo outside Cornerstone Baptist Church in Hartwell where he has served for more than three decades.
Previous Next
Posted Thursday, January 26, 2023 10:54 am
By ROGER ALFORD, The Christian Index

HARTWELL, Ga. – Pioneering church planter Terry Meeks is retiring more than 30 years after joining a group of Hartwell families to launch what would become one of northeast Georgia’s premier congregations.

Meeks and the others started Cornerstone Baptist Church in the unlikeliest of places, a defunct funeral home, but it worked out beyond their wildest imaginations.

Over the past three decades, Meeks, 74, has seen Cornerstone grow into an evangelistic-minded congregation bent on reaching the lost not only in Hartwell but also around the world.

“I have loved every moment of it,” Meeks said. “I can say that I have had the opportunity to pastor a great church, and I thank God for that. I have been so privileged.”

His retirement is effective next Sunday.

Since 1994, Cornerstone has grown to more than 1,000 members, baptized 768 new believers, and contributed more than $1 million through the Cooperative Program, which finances the work of the Georgia Baptist Mission Board, the North American Mission Board and the International Mission Board.

“Terry Meeks' is one of the most winsome pastors I've ever met,” said Scott Smith, a Southern Baptist evangelist who serves as communications director for the state Mission Board. “Empathy and love characterize his life. However, he's a straight shooter, too. He'll tell you what you need to hear when you need to hear it.”

Smith, who has preached numerous revivals at Cornerstone over the years, called Meeks “a loving prophet” who is willing “to tell you the hard truth … even if it hurts.”

Smith said Meeks invested his life in Hartwell, staying where the Lord had called him, though, as one of the Southern Baptist Convention’s top preachers, he could have gone anywhere in the country.

“He wasn't climbing a ladder or moving on to the next place,” Smith said. “He and his sweet wife, Pat, who has been a vital part of his high-impact ministry, thoroughly invested their lives where they were.”

From its earliest days, Cornerstone had strong support from the community. That was evident the day Meeks and some of his charter members were cleaning up the property around the former Smith Funeral Home building in preparation for their first Sunday morning service.

Complete strangers would drive by, see what they were doing, go home to change into work clothes, and come back to help.

The church remained in the funeral home building for nine years until moving onto a 23-acre campus on the outskirts of town in 2003.

Growth quickened when the local radio station approached church leaders with an opportunity to broadcast their morning worship services.

“I said, ‘I don’t have time to edit our services for radio,’ and they said, ‘You don’t understand; we want you on live,’” Meeks said.

They’ve broadcast continuously on radio for the past 28 years.

Meeks said he has been amazed by the favor God has shown him, a man who, in his younger years, had no intention of serving as a pastor.

“I thought I’d be an evangelist,” Meeks said. “The pastor would fix them up and I would go in and shoot them up.”

Meeks had given his heart to Christ as an 8-year-old, and had a pastor, Worth Huckaby at Valley Grove Baptist Church in Thomaston, who made a lasting impression on him. They parted after high school when Meeks went into the military.

Meeks had enlisted in the U.S. Navy, thinking by doing so he would avoid serving in Vietnam. It didn’t work. The Navy stationed him in Vietnam as part of an air crew.

During Meeks’ years overseas, Huckaby and his wife, Christine, had prayed for him every day. They never ate a meal, he learned later, without first praying for him.

So when Meeks and Pat were to be married, they turned to Huckaby to perform the ceremony. Meeks wasn’t living as a Christian at the time. In fact, he said, he was working at a liquor store.

“He didn’t preach to me,” Meeks said of Huckaby. “He just loved me.”

Meeks said having a man like Huckaby in his life was especially important when he began to feel God’s call to ministry.

“I knew when you were a little boy that you would be a preacher,” Huckaby told him. “But would you do me a favor? Would you pray that, if God wants you to be a pastor, that He will give you a pastor’s heart?”

“I thought, what could that hurt?” he said. “So, I prayed that prayer.”

That was his prayer throughout 2 ½ years in seminary.

“In that period of time, God had given me a pastor’s heart. I couldn’t think of anything I’d rather be than a pastor.”

With degrees from Kennesaw State University and Southwestern Baptist Theological Seminary, Meeks accepted the pastorate at First Baptist Church in Spring City, Tenn., after which he moved to Sardis Baptist Church in Hartwell.

Everything he did leading up to 1994 was preparing him for his life’s work at Cornerstone.

“It's hard to put into words what it has meant to me to serve as pastor at Cornerstone,” he said. “I end every newsletter article that I write with, ‘I love being your pastor.’ And that is the absolute truth. I love it. God has blessed, and we’ve just sat back and enjoyed the miracles.”

Steve Ferguson, the associational missionary in the Hebron Baptist Association, said Meeks, like Huckaby in his day, has been a major influence on young preachers, always taking time to offer insights that he learned from his own ministry.

“He is a community pastor,” Ferguson said. “It’s not like he has intentionally tried to be, but it’s because of his personality, the way he impacts people, the way he encourages people.”

Ferguson said Meeks shines the light of Christ not just in the words he says but in his hospitable, loving manner.

“He has influenced a lot of people,” Ferguson said. “People can’t help but see Jesus in him.”