Offended by the national motto 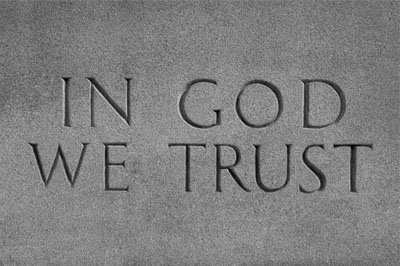 John Marty and Scott Dibble, Democratic state senators from Minnesota, are opposed to a bill asking schools to display posters with the words “In God We Trust.”

Marty took the matter a step further by saying, “The money in my wallet has to say, ‘In God we trust.’ I think that’s offensive.

“It has been stated that 79 percent of the people in America believe in some supreme being. That means that there are 21 percent who do not. I want to speak on behalf of the 21 percent to whom this legislation is not welcoming, encouraging, or comfortable. I also speak on behalf of many of us in the 79 percent, who believe in God, but who think a government sanctioned model doesn’t strengthen our religion, but it demeans, devalues, and cheapens our religion.”

I wonder if having the national motto on our money is offensive enough for Marty to part with it and give it to the Cooperative Program (or his own Lutheran church).

Minnesota State Senator Dan Hall, the sponsor of the legislation, was shocked at the amount of opposition the bill has received from his colleagues. He stated that there is an “anti-faith movement” in the country.

His purpose in proposing the bill was to bring back respect in the schools. He stated, “We’ve lost a lot of respect for those things in life that we should be respecting.”

Hemant Menta, writing on the proposed legislation, stated, “Who is this helping? Nobody, of course. This is just another way to promote Christianity though the government. So, let’s state the obvious. The ‘In God We Trust’ posters are useless. Not only is promoting religion not the job of public schools, no students will receive a better education because they’re putting their faith in supernatural nonsense.

“If you’re praying before an exam, you should’ve studied harder. And even though it’s our national motto, it still sends a horrible message, as if you have to believe in God to be a ‘True American.’”

The entire bill, including the amendment to post the motto, passed the State Senate by a vote of 42 to 25.

Marty indicated that when he got home from church on Sunday there was a vile, obscene voice message attacking him for hating religion and several angry emails and Twitter messages attacking him as anti-religious and un-American.

I deplore that the Minnesota state senator was attacked with vicious and unkind words and repudiate that kind of unchristian action, but Marty doesn’t seem to understand America’s heritage – a heritage that we should cherish and preserve.

The "Declaration of Independence," the foundation of our nation’s "Constitution," is mightily imbued with a biblical worldview. In fact, this document has become controversial in our secular society, because it unveils the distinct Christian influence of our founding fathers.

The Declaration of Independence affirms a belief in the God who created the universe and all within it. Those who framed the Declaration wrote, that we are “endowed by our Creator with certain unalienable Rights.” There is no mention of evolution in this cherished document.

“The Laws of Nature and Nature’s God” is also found in the Declaration of Independence; and who is responsible for “the laws of nature” but God?

In the last paragraph there is a reference to God as judge and the declaration of our reliance on the protection of Divine Providence. Those who deny that our nation was founded upon Christian principles are ignoring or denigrating the truth.

While the Constitution makes no reference to God, it does honor the Christian Sabbath. The President was given 10 days to sign a bill into law. The counting of the 10 days does not include the Sabbath. The Constitution specifies: “If any Bill shall not be returned by the President within ten days (Sunday excepted) after it shall have been presented to him, the Same shall be a Law.” When the delegates signed the Constitution in the “Year of our Lord” they were making a direct reference to Christianity.

During Jefferson’s administration weekly Sunday worship services were held at the U.S. Capitol. One court noted that the Muslims have Friday for worship and the Jews have Saturday, but no other religion in the world honors Sunday except Christianity.

Furthermore, when the Revolutionary War was officially ended with the signing of the Paris Peace Treaty and the United States became a nation, it was done in the “name of the most holy and undivided Trinity.” This signifies that the nation was founded on the Christian faith.

Emilio Castelar, the 19th century Spanish statesman, traced America’s source to one book: the Bible. In 1892, the Supreme Court unanimously concluded without qualification “this is a Christian nation.”

Teddy Roosevelt commented, “The teachings of the Bible are so interwoven and entwined with our whole civic and social life that it would be literally ... impossible for us to figure to ourselves what that life would be if these teachings were removed.”

Herbert Hoover declared, “American life is built, and can alone survive, upon ...  the fundamental philosophy announced by the Savior nineteen centuries ago.”

Therefore, those who wish to change the script and declare that they are offended with the national motto are advocates of a revolution designed to depart from our heritage and create something foreign to what we have known in the past.

While I would never defend a race-based, class-based kind of Christianity as we have seen in the past, I would maintain that much of the good we experienced in days gone by is being rejected in our day. In fact, that which is good must be reclaimed.

The Gospel is still “Good News” and we must not be afraid to declare it boldly, lift up the banner of truth, call people to repentance, pray for divine intervention, and live out our faith – even if it means death.