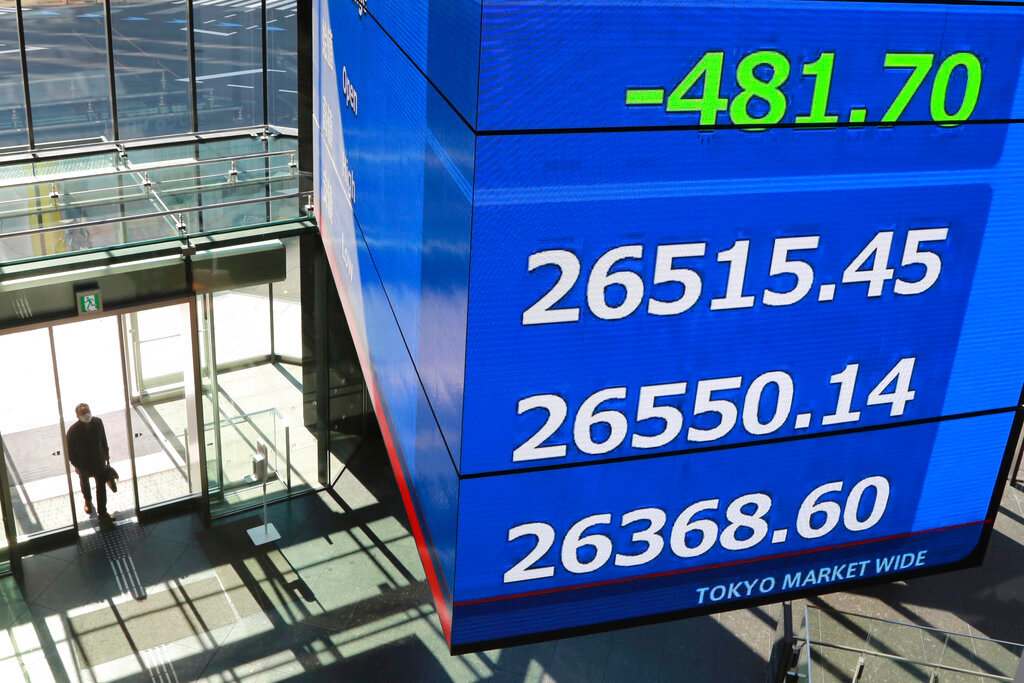 Russia is a major energy producer and the tensions over Ukraine have brought wide swings in volatile energy prices, on top of the inevitable risks of a broader conflict.

Oil prices already had surged recently to their highest level since 2014. By early Tuesday, the advance of U.S. benchmark crude oil had abated slightly. It was up about $3, or 3.5%, to about $94 per barrel in electronic trading on the New York Mercantile Exchange. The price of Brent crude, the standard for international oils, gained about $4.50, or nearly 5%, to hit about $98 per barrel.

U.S. trading was closed Monday for Presidents Day, but markets in Europe and Asia shuddered as Putin moved to secure Russia's hold on Ukraine’s rebel regions, adding to fears of a full-scale invasion.

Those actions have undermined hopes for averting a conflict that could cause massive casualties, energy shortages on the continent and economic chaos around the globe.

The U.S. and European Union condemned Russia and prepared to hit back with sanctions. On Tuesday, Germany suspended the approval process for the Nord Stream 2 pipeline that would bring Russian natural gas to Europe. Western powers have feared Russia might use skirmishes in Ukraine’s eastern regions as a pretext for an attack on the democracy, which has defied Moscow’s attempts to pull it back into its orbit.

Putin received no support from members of the U.N. Security Council at an emergency meeting Monday night for his actions to bring separatists in eastern Ukraine under Moscow’s control.

The biggest losses have been in Russia, where the MOEX index was down 5% Tuesday after losing nearly 11% on Monday.

The turmoil in Ukraine has upped uncertainty at a time when investors already are jittery over how the world’s central banks, especially the U.S. Federal Reserve, will act to counter surging inflation while coronavirus outbreaks fueled by the highly contagious omicron variant cloud the outlook for many countries.

“Indeed, a full-scale invasion of Ukraine by Russia will leave many central banks with itchy hiking trigger fingers in a quandary,” Jeffrey Halley of Oanda said in a report.

Many Asian economies depend on oil and gas imports, and even if those don't come from Russia, the spillover effects on world markets will raise energy costs at a time when countries are still barely recovering from the pandemic.

“Crucially, while Russia may not be the most prominent source of direct energy imports for (emerging markets in) Asia, its sheer heft as a global producer/exporter means energy shocks emanating from Russian supply disruptions will nevertheless be disproportionally large," Mizuho Bank's Vishnu Varathan said in a report.

“So, Ukraine risks are consequential one way or another," he said.

Russia exports coal to India and Vietnam and is the fourth largest supplier of oil to South Korea, Varathan said.

On other fronts, Treasury yields have been falling as investors shift money into the safety of U.S. bonds. The yield on the 10-year Treasury, which affects rates on mortgages and other consumer loans, was at 1.90% by early Tuesday, down from 1.93% on Monday.

U.S. stocks capped a week of volatile trading with a broad sell-off on Friday.

The S&P 500 and Dow Jones Industrial Average both slipped 0.7%. The Nasdaq composite bore the brunt of the selling, skidding 1.2%. Small company stocks also fell, with the Russell 2000 index down 0.9%.