Members of Baptist Communicators Association pray for Senator James Lankford (R-OK), second from right in a suit, during a recent meeting in the nation's capital. JOE WESTBURY/Index

This is the first of a two-part story on Senator James Lankford, a Republican who served on the staff of the Baptist General Convention of Oklahoma before his 2015 election to Congress. In today’s installment Lankford talks about life in the nation’s capital. Tomorrow he shares more about his faith and that unlikely path from director of Falls Creek Baptist Assembly and director of youth ministry for the state convention to the halls of Congress.

WASHINGTON, DC — If there is one message that Oklahoma Senator James Lankford (R) wants the American public to hear from his time in office, it is this: it is not Washington’s role to “fix America.” Rather, it is the church’s role to redeem society and then to change government.

Lankford made those closing remarks to a gathering of Southern Baptist communications professionals from across the country as they gathered in the nation’s capital for their annual meeting in late April.

In a brief 30-minute visit with members of the Baptist Communicators Association, Lankford – a former Oklahoma Baptist youth pastor and director of the state’s Falls Creek Baptist Conference Center for 15 years – shared insights on what it is like to go from the religious to the secular environment while maintaining biblical values.

Concerning the future of the nation, his comments were succinct and from the heart. 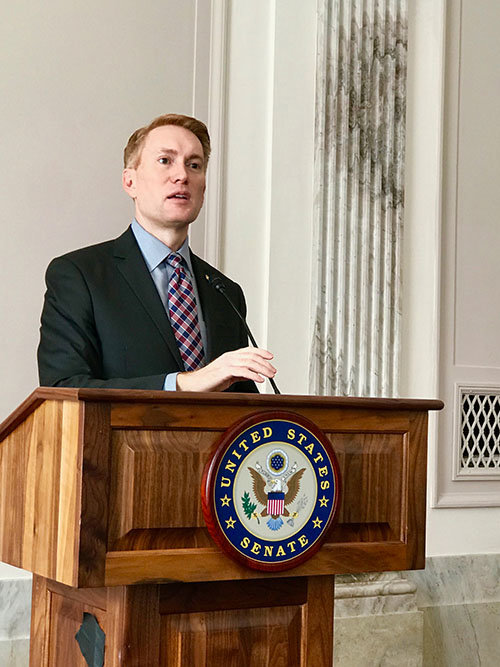 He then said that the size of government is rising because families ae collapsing. The best antidote to that collapse remains healthy churches in local communities.

“Washington is trying to give the nation all kinds of different programs to try to supplement what is happening in collapsing families. That is never going to work long-term; it’s always going to be a stopgap.

“Anything you can do to help elevate families and help connect senior adults with younger folks for mentoring (relationships) … helping connect those dots  … is a (significant) generational shift” in building healthy relationships,” he stressed.

“You know as well as I do how (today) many parents are unmarried or divorced  and how many kids don’t know their parents … how disconnected so many families are. My parents were divorced when I was 4 years old. So, obviously, I understand the issue that is rapidly accelerating along with the generational disconnect.”

Lankford then concluded by saying the well-reported collapse of the family structure “is weakening our foundation (as a nation) and cannot be turned around by a government program.”

The junior senator then touched on a variety of topics before taking questions from the group.

Being open to a calling

“We all have a unique calling and it’s not (a calling) to an occupation; our calling is to a Person and at times we get those confused," he told the communicators.

"I try to remind people all the time that they are not called to a job title; as a Christian you are called to be a follower of Christ. Our calling is to a person, not a place (of occupation). That’s what I try to live out. I assure you that I never expected this to be in the place where I would be serving today (in government).

"I have yet to have anyone say, 'Do you really want to be a United States Senator?'”

The Oklahoma Republican then discussed the dichotomy between being both a minister and government representative and how a Christian can be both.

He said he tries to remind people about a truth that Christians know to be true: that there is not a distinctive culture that can be identified as a uniquely Christian. Christianity has always been counter culture, he said.

Lankford then noted that the Apostle Paul’s messages were very counter cultural as he wrote to the church at Ephesus. And when Peter was writing to the churches in Asia Minor, he stressed that he was about to tell them a shocking new concept that would be just as shocking among the people with whom they were living. Lankford said their new lifestyle would cause them to feel like aliens and strangers in the world but when people accused them of wrong doing those people would also see their good deeds which would glorify God.

Lankford then gave an example from Scripture on how believers can stand out in culture and thereby create opportunities to share the Gospel.

“Honoring authority is really jarring in that (New Testament) culture and in our culture today. If you want to stand out and provide opportunity to present the gospel and bring honor and glory to God … because no one else does that … you will have an opportunity to talk to someone about how your life is different and how God has changed your life. That is a challenge for any of us in the culture that we live in," he maintained.

“Our role is to both challenge authority and honor authority at the same time while articulating biblical truths and saying, ‘this is what is right.’ Now, not everyone in government is honorable … that’s just the facts. But that’s not new and that’s the way it has been for a very long time.

"Every government rises and falls but at the end of the day God still has a Kingdom and a plan."

Scott Barkley, Index associate managing editor, then asked Lankford if there were any examples of when he had a “Welcome to Washington” that brought into sharp focus that he was no longer an Oklahoma youth pastor.

He replied that there have been several times when the new reality began to sink in, such as the first time he was with a small group discussing foreign policy with Israeli Prime Ministry Benjamin Netanyahu. He said that was a memorable moment when he realized the seriousness of the meeting and that “this was playing for keeps.” 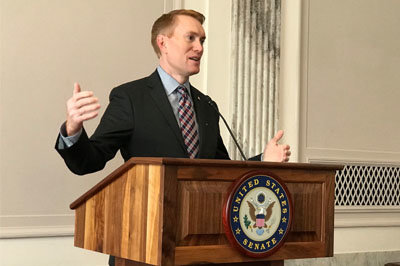 Prior to his election Lankford served for 15 years as the Oklahoma student ministries and evangelism specialist and director of Falls Creek Baptist Assembly. JOE WESTBURY/Index

Another such moment was dealing with hotly debated issues such as immigration. “First, the immigration crisis is a humanity crisis because every person is created in the image of God. And secondly, it’s also a law issue that requires balance.

“I was preaching at a church in Oklahoma once and after the service the pastor stopped me and wanted to talk about immigration. He said, ‘Our church loves everybody and we don’t ask anyone where they are from or anything about their background. The gospel goes everywhere.

“But then he tapped me in the chest and said, ‘But you represent the government. You have to figure out how to love everybody and also practice the law.

How to pray for Senator Lankford

On the day of his meeting with BCA members, Lankford touched on the pressures of being a husband and father with a 1,400-mile gap between him and his family. As an example, he mentioned that at the end of that day he was catching “the fastest flight back” to Oklahoma City to be present for his youngest daughter’s 18th birthday. She was competing in a track meet and her last heat was at 9:30 p.m. His was going to put in a full day at work and make a hurried trip to the airport. He noted that his plane was going to land at 8:20 p.m. so barely had an hour to drive across town to be part of that important moment in her life.

Always pray for our family, we need that. It’s not fun being separated all the time. My wife of 26 years, Cindy, and I have a running joke that we got married to spend more time together, not less.

There are a million things you could work on here every day but my team and I cannot do a million things. But we can do a lot. DC functions a lot like a soccer game played by four-year-olds; it is difficult to get everyone focused on one goal.

The primary prayer of Nehemiah was asking God to give him favor with the right individual so can be successful. There are things we feel very passionate about but they are not going to get accomplished if God does not give us favor with the appropriate individuals. I am working on a bill now to change the way we do budgeting that is not going to get done if I don’t have favor with 59 other people.