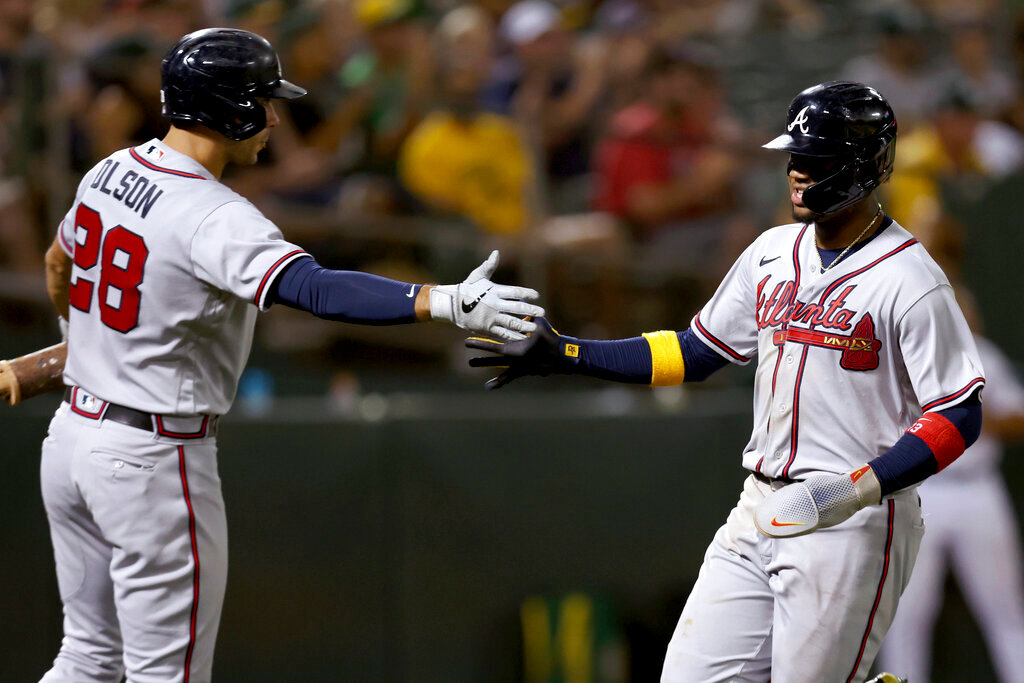 Atlanta Braves' Ronald Acuna Jr., right, is congratulated by Matt Olson (28) after scoring on a sacrifice fly by Austin Riley against the Oakland Athletics during the sixth inning in Oakland, Calif., Tuesday, Sept. 6, 2022. (AP Photo/Jed Jacobsohn) 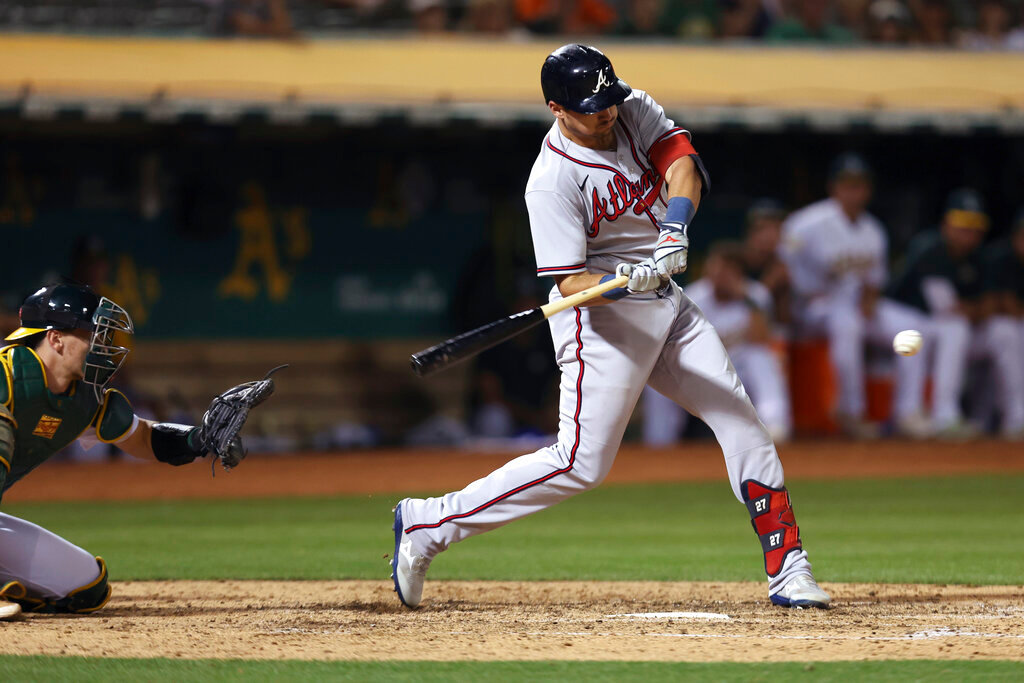 OAKLAND, Calif. (AP) — When their ace struggled, the Atlanta Braves kept slugging — right back into first place after all these months chasing the Mets.

Matt Olson hit a three-run homer against his former club and the Braves won their sixth in a row, outswinging the Oakland Athletics 10-9 on Tuesday night and finally catching New York atop the NL East.

The reigning World Series champion Braves (85-51) pulled even with a slumping Mets team that had held sole possession of the division lead for 147 days since April 12 but has lost three straight.

“It's where you want to be, you'd rather be here than somewhere else,” manager Brian Snitker said. “You want to be in the thick of the thing. I've always said, even when I was a third base coach, it's like you love that time of the year when you wake up, get a cup of coffee and you can't wait to get to the ballpark because you want to play the next game. That's a good place to be.”

Major league wins leader Kyle Wright surrendered a career-high eight runs to the A’s. His team held tough, just as has been the case so many times in 2022.

“I feel like this game was kind of a perfect example of that,” Wright said. “I struggled pretty bad but these guys picked me up. The offense was great, defense was great, the bullpen was incredible to finish that game with a one-run lead the whole time. It could've been way more than that. That game right there was a huge testament to the team as a whole and how we do a good job of picking each other up.”

Wright had won four straight starts, boosting his record to 17-5. With the temperature an unseasonably warm 86 degrees at game time during California’s heat wave, baseballs flew from first pitch.

Wright’s career-best scoreless innings streak ended at 15 dating to June 19 against the Astros when he gave up an RBI groundout to Sean Murphy in the first.

Murphy and Seth Brown hit back-to-back homers in the third. Chad Pinder hit a three-run homer in the fifth to tie it at 9-all. It was his franchise-record sixth career pinch-hit homer.

The Braves had been 0-9 previously this year when giving up nine or more runs.

“We hadn't had one of those in a while, so it was good to see the guys keep fighting, keep scoring,” Snitker said.

Olson returned to Oakland for the first time since the Braves acquired the slugging first baseman from the A's in March. He received cheers when he stepped into the batter's box in the first inning.

Another ex-A’s player, Jesse Chavez (3-1), pitched 1 1/3 innings for the win and Kenley Jansen finished for his majors-best 32nd save.

A’s lefty Cole Irvin was tagged for a career-high nine runs over 4 2/3 innings.