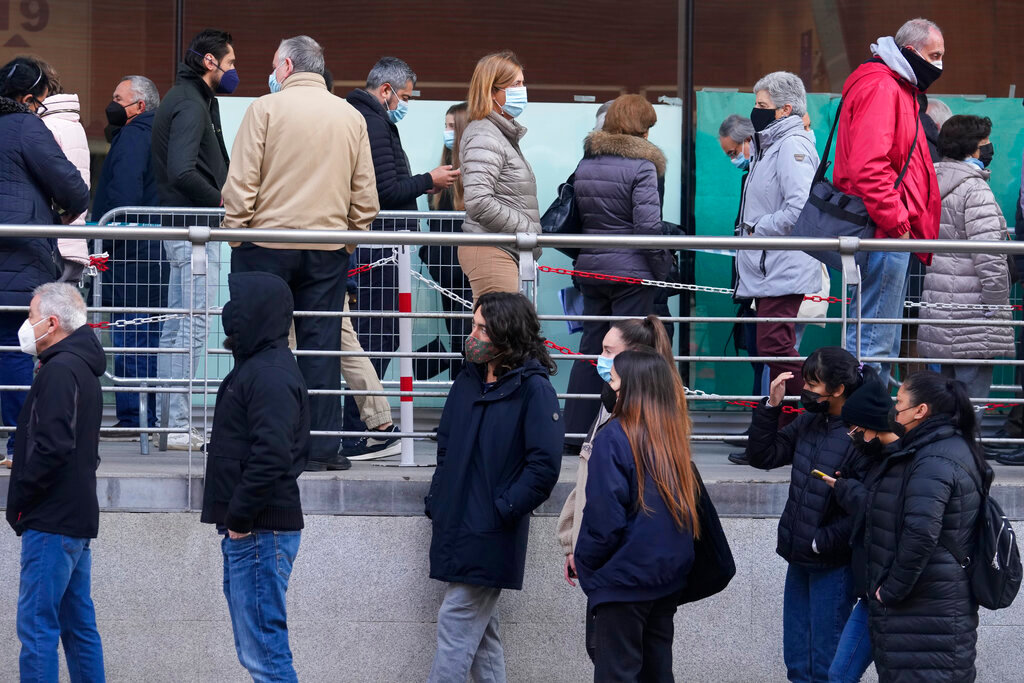 People queue for Pfizer COVID-19 vaccinations in the Wizink Center in Madrid, Spain, Wednesday, Dec. 1, 2021. Health authorities in the Spanish capital have confirmed a second case of the omicron coronavirus variant in a 61-year-old woman who had returned from a trip to South Africa on Monday. (AP Photo/Paul White)
Paul White
Posted Wednesday, December 1, 2021 9:09 am
By MARI YAMAGUCHI, FOSTER KLUG and RAF CASERT, Associated Press

TOKYO (AP) — The omicron variant kept a jittery world off-kilter Wednesday as Japan further tightened travel restrictions, infections linked to the new version of the coronavirus popped up in more places and new evidence made clear the mutant strain was circulating weeks earlier than thought.

Much is still unknown about the new variant, including how contagious it is and whether it can evade vaccines, and the European Union chief acknowledged that waiting for scientists to tell the world more felt like "an eternity.” Meanwhile, many nations in Europe are still dealing with a surge in infections and hospitalizations from their old foe, the delta variant.

Japan continued its aggressive stance, asking international airlines to stop taking new reservations for all flights arriving in the country until the end of December. The move by the world’s third-largest economy, coupled with its recent return to a ban on foreign visitors, is among the most severe anywhere, and more in line with cloistered neighbor China than with some other democracies in the region.

Many countries around the world, however, have barred travelers from southern Africa, and the U.S. is moving to toughen testing requirements for international arrivals.

South African researchers alerted the World Health Organization to omicron last week, but it is not known where or when the variant first emerged, and it's already clear it was circulating in Europe before that alert. But Nigeria stretched the timeline back even further Wednesday, when its national public health institute said it detected the variant in a sample it collected in October — also its first known case of the mutation.

The worry and uncertainty about the new variant and the sometimes haphazard imposition of restrictions recalled the early days of the pandemic, as did the familiar realization that the virus had once again outpaced efforts to contain it.

In a sign of how difficult the virus is to control in an age of jet travel and economic globalization, Japan confirmed its second case of the variant — in a person who arrived from Peru via Qatar. Saudi Arabia, meanwhile, said Wednesday it had detected its first case of omicron, a day after Brazil reported cases of the variant, the first known ones in Latin America.

“I listen to my scientists, they all say we do not know enough now. Therefore, it is good that they take their two to three weeks,” said European Commission President Ursula von der Leyen. “This is, in normal times, a short period. In pandemic times, it’s an eternity.”

While the world waited impatiently for more information, some countries were already struggling to beat back surges that predated the announcement of omicron.

Germany’s intensive care association warned Wednesday that the number of COVID-19 patients requiring intensive care will hit a new high before Christmas — and that it expected the all-time high from last year to be exceeded.

The DIVI association called for national restrictions to slow the spread immediately. German federal and state leaders are expected to decide Thursday on new measures. Chancellor-designate Olaf Scholz said he would back a proposal to mandate vaccinations for everybody next year.

Austria, meanwhile, extended its lockdown until Dec. 11 as planned amid signs that the restrictions are helping to bring down a sky-high coronavirus infections.

Germany and Austria are among several nations in Europe seeing surges — even some with relatively high vaccination rates. Portugal — with an 87% vaccination rate that is among the highest globally — tightened entry requirements and mandated masks indoors Wednesday to slow an upward trend. Until recently, the country was shielded from the spikes experienced by elsewhere on the continent.

South Korea is also seeing a delta-driven surge that has pushed hospitalizations and deaths to record highs. The country on Wednesday reported a daily jump in coronavirus infections that exceeded 5,000 for the first time — along with its first cases of the new variant.

The emergence of yet another variant has left the world once again whipsawed between hopes of returning to normal and fears that the worst is yet to come.

In Singapore, which is trying a strategy of living with COVID-19 and has one of the world’s leading vaccine programs, cases are now dropping rapidly, and there’s cautious optimism that its widely watched plan has helped it turn a corner in the pandemic.

Fiji welcomed back its first tourists in more than 600 days on Wednesday after pushing ahead with reopening plans despite the threat posed by omicron.

Dr. Anthony Fauci, the United States’ top infectious disease expert, said much more will be known about omicron in the next several weeks, and “we’ll have a much better picture of what the challenge is ahead of us.”