Once a powerful symbol in Russia, McDonald's withdraws 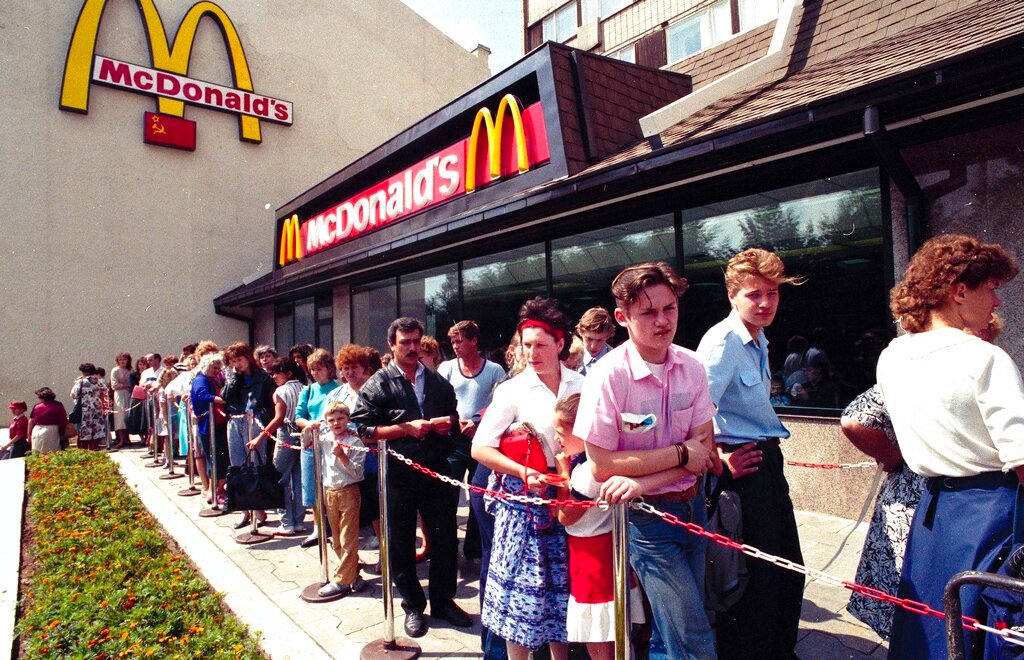 Russians wait in line outside a McDonald's fast food restaurant in Moscow in 1991. Two months after the Berlin Wall fell, another powerful symbol opened its doors in the middle of Moscow: a gleaming new McDonald’s. It was the first American fast-food restaurant to enter the Soviet Union. But now, McDonald's is temporarily closing its 850 restaurants in Russia in response to the Ukraine invasion. (AP Photo/File)
Posted Monday, March 14, 2022 2:24 pm
By DEE-ANN DURBIN, AP Business Writer

Two months after the Berlin Wall fell, another powerful symbol opened its doors in the middle of Moscow: a gleaming new McDonald’s.

It was the first American fast-food restaurant to enter the Soviet Union, reflecting the new political openness of the era. For Vlad Vexler, who as a 9-year-old waited in a two-hour line to enter the restaurant near Moscow’s Pushkin Square on its opening day in January 1990, it was a gateway to the utopia he imagined the West to be.

“We thought that life there was magical and there were no problems,” Vexler said.

So it was all the more poignant for Vexler when McDonald’s announced it would temporarily close that store and nearly 850 others in response to Russia’s invasion of Ukraine. McDonald’s Russian website on Monday read: “Due to operational, technical and logistical difficulties, McDonald’s will temporarily suspend service at its network enterprises from March 14.”

“That McDonald’s is a sign of optimism that in the end didn’t materialize,” said Vexler, a political philosopher and author who now lives in London. “Now that Russia is entering the period of contraction, isolation and impoverishment, you look back at these openings and think about what might have been.”

McDonald’s said in a statement that “at this juncture, it’s impossible to predict when we might be able to reopen our restaurants in Russia.” But it is continuing to pay its 62,500 Russian employees. The company said this week that it expects the closure to cost around $50 million per month.

Outside a McDonald’s in Moscow last week, student Lev Shalpo bemoaned the closure.

“It’s wrong because it was the only affordable place for me where I could eat,” he said.

Just as McDonald’s paved the way for other brands to enter the Soviet market, its exit led to a cascade of similar announcements from other U.S. brands. Starbucks closed its 130 outlets in Russia. Yum Brands closed its 70 company-owned KFC restaurants and was negotiating the closure of 50 Pizza Huts that are owned by franchisees.

McDonald’s entry into the Soviet Union began with a chance meeting. In 1976, McDonald’s loaned some buses to organizers of the 1980 Moscow Olympics who were touring Olympic venues in Montreal, Canada. George Cohon, then the head of McDonald’s in Canada, took the visitors to McDonald’s as part of the tour. That same night, the group began discussing ways to open a McDonald’s in the Soviet Union.

Fourteen years later, after Soviet laws loosened and McDonald’s built relationships with local farmers, the first McDonald’s opened in downtown Moscow. It was a sensation.

On its opening day, the restaurant’s 27 cash registers rang up 30,000 meals. Vexler and his grandmother waited in a line with thousands of others to enter the 700-seat store, entertained by traditional Russian musicians and costumed characters like Mickey Mouse.

Vexler saved money for weeks to buy his first McDonald’s meal: a cheeseburger, fries and a Coca-Cola. The food had a “plasticky goodness” he had never experienced before, he said.

Eileen Kane visited the original McDonald’s often in 1991 and 1992 when she was an exchange student at Moscow State University. She found it a striking contrast from the rest of the country, which was suffering frequent food shortages as the Soviet Union collapsed.

“McDonald’s was bright and colorful and they never ran out of anything. It was like a party atmosphere,” said Kane, who is now a history professor at Connecticut College in New London, Connecticut.

McDonald’s entry into the Soviet Union was so groundbreaking it gave rise to a political theory. The Golden Arches Theory holds that two countries that both have McDonald’s in them won’t go to war, because the presence of a McDonald’s is an indicator of the countries’ level of inter-dependence and their alignment with U.S. laws, said Bernd Kaussler, a political science professor at James Madison University in Harrisonburg, Virginia.

That theory held until 2014, when Russia annexed Crimea, Kaussler said.

Kaussler said the number of countries now withdrawing from Russia, and the speed with which they acted, is unprecedented. He thinks some __ including McDonald’s __ might calculate that it's unwise to reopen, which would leave Russia more isolated and the world less secure.

“As the Russian economy is becoming less inter-dependent with the U.S. and Europe, we basically have fewer domestic economic factors that could mitigate current aggressive policies,” Kaussler said.

Vexler said the admiration for the West that caused Russians to embrace McDonald’s three decades ago has also shifted. Russians now tend to be more anti-Western, he said.

Anastasia Chubina visited a McDonald’s in Moscow last week because her child wanted one last meal there. But she was indifferent about its closure, suggesting Russians will get healthier if they stop eating fast food.

“I think we lived without it before and will live further,” she said.

Entrepreneur Yekaterina Kochergina said the closure could be a good opportunity for Russian fast-food brands to enter the market.

“It is sad, but it’s not a big deal. We’ll survive without McDonald’s,” she said.