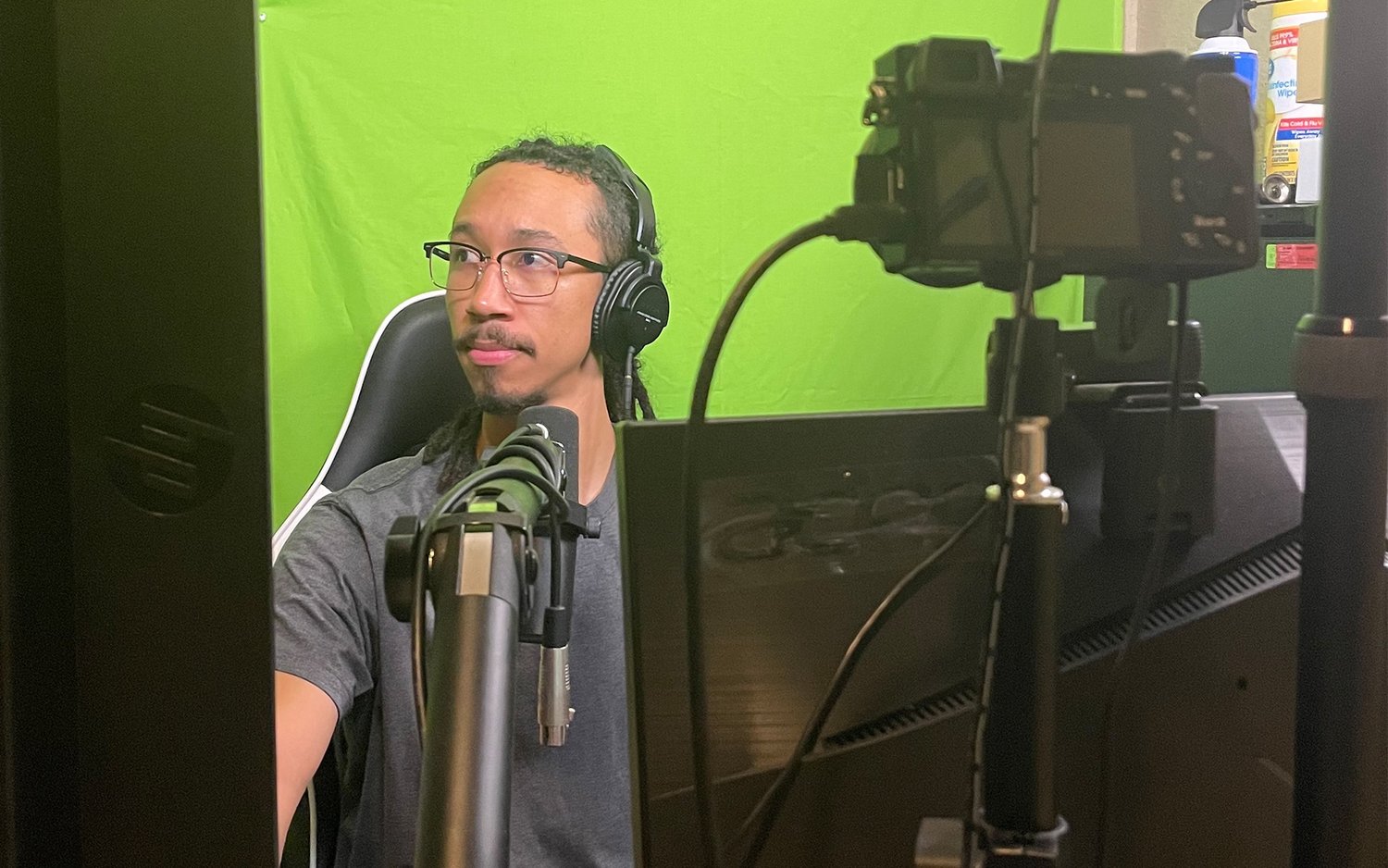 Online missionary Joshua Clayton livestreams on his channel while engaging through gaming. He is on staff at Claremore FBC in Claremore, Okla. as an online missionary to the gaming community. 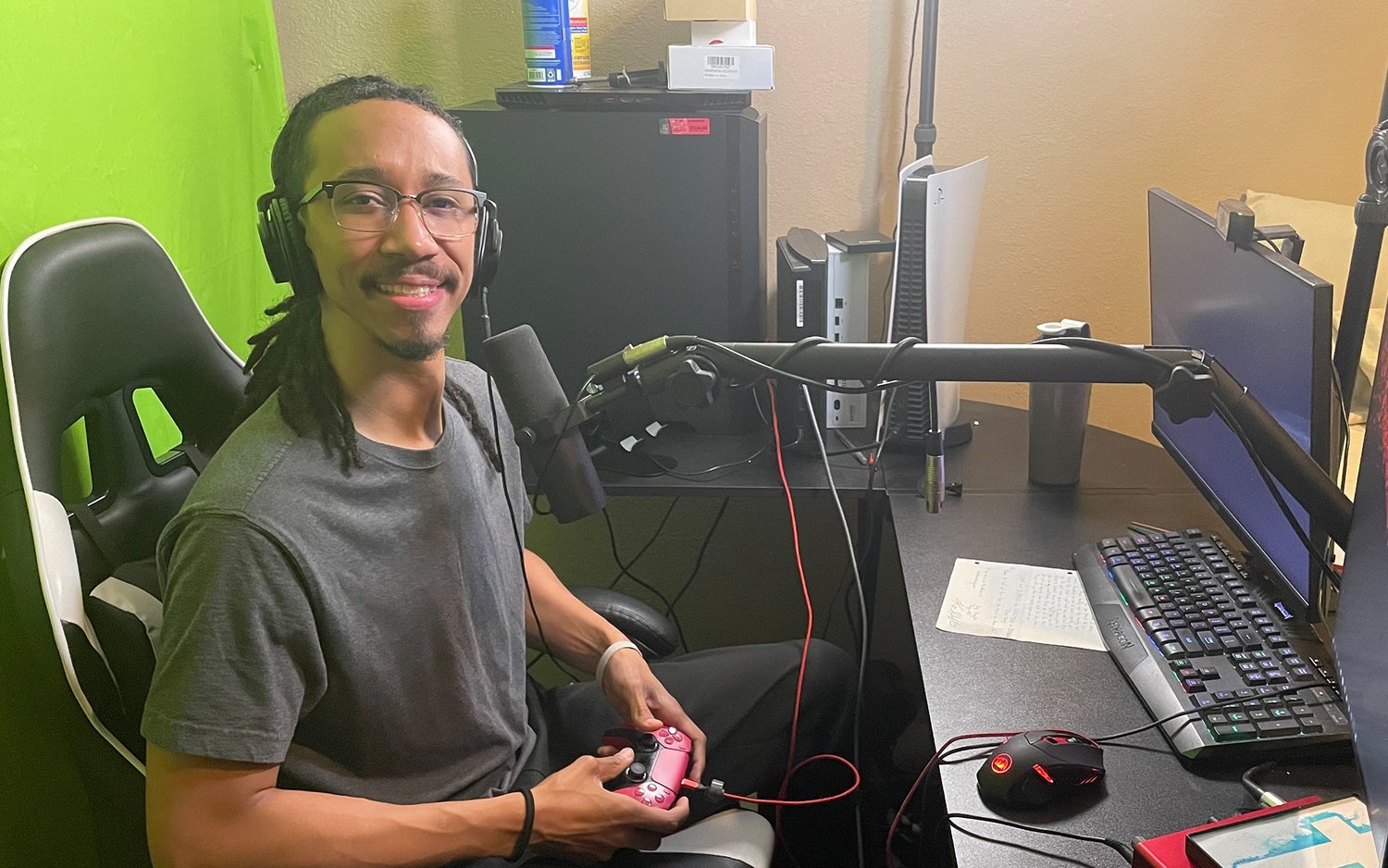 Joshua Clayton sits at his desk, where he serves as an online missionary to the gaming community.
Previous Next
Posted Wednesday, August 10, 2022 11:24 am
By TIMOTHY COCKES, Baptist Press

CLAREMORE, Okla. (BP) – For Joshua Clayton, talking to people about Jesus has always been a part of who he is, even while playing video games or creating online content.

He now uses these two passions together in his new role as “online missionary” at Claremore First Baptist in Okla.

Clayton began livestreaming his video game play during the COVID-19 pandemic in 2020. Broadcasting the content was initially an attempt to earn extra income to pay for his wife’s unexpected medical bills.

He soon began averaging up to 10,000 views per video and reaching viewers from dozens of countries.

While he livestreams playing the games (typically sports games such as NBA2K or NCAA Football 2014), Clayton is able to communicate with viewers as they post comments that appear on the side of the screen as he is playing.

These conversations can often turn serious, and Clayton simply says what comes naturally.

“You put me working out in a field or in the oil industry or whatever, I’m going to find a way to talk about Jesus. A large part of what I’m doing now as an online missionary is stuff that I’ve been doing since as early as high school. I use the forum of online gaming to meet people, talk and build relationships. I use opportunities like that to tell people about Jesus.”

Claremore First Baptist noticed the impact Clayton was making and reached out to him about joining the church staff in a unique position to help bolster its online influence during the pandemic.

In the position, Clayton simply continues what he has been doing on his previous gaming channels, while also hosting an apologetics-type bible study every week called “Unseen Hope” on behalf of the church.

He also helps with the church’s tech and media teams and helps oversee its social media accounts.

Keith Wiginton, senior pastor at Claremore, said he came across Clayton’s content while watching videos with his son.

Clayton had previously served as an intern at the church, and his wife is the daughter of one of the church’s staff members.

Although the position might be unconventional, Wiginton said there is a great need for online ministry.

“There may be a generation gap in understanding,” Wiginton said, “but to a younger generation, watching someone play video games is just the same as watching a football game is to my generation. It’s just entertainment.

“We knew Josh and realized he had thousands of followers and that he was getting to have Gospel conversations with people online almost every week. We thought, ‘How many missionaries would we have to send and how much money would it cost to reach all the different people that he does?’ We saw there was a need and thought it was worth it to try and support him.”

A self-described natural extrovert, Clayton said Southern Baptist seminary training helped him be better prepared for the serious Gospel encounters he has online.

He graduated from Southwestern Baptist Theological Seminary with an M.Div. focused in biblical counseling, and was a doctoral student at Midwestern Seminary while also working full-time on campus.

The combination of the COVID-19 pandemic and unexpected medical bills for his wife caused Clayton to explore other ways of earning income. He began streaming just to see if it was even a viable option, and Midwestern even allowed him to use his cubicle at work to create his streaming content.

After a couple of months, Clayton gained a few thousand followers and became an official Facebook Gaming Partner, essentially an employed content creator for the social media giant.

Clayton said Facebook did not ask him to change his content at all; he could continue to talk about Jesus in his videos. And the ministry is often hard.

One tragic situation he recalled was of a young woman expecting twins who would often watch his livestreams and leave comments.

Clayton noticed when the woman stopped watching. Eventually, her brother joined one of his streams to deliver the news that the woman had taken her own life and asked for prayer for the family.

Using his training in biblical counseling, Clayton said he tries to step into difficult situations like that one and provide the hope of Christ.

“I want to be there for people who are going through their ‘valley of the shadow of death,’ experience,” Clayton said.

“I want to do my part to curate online content and try to build a platform that will essentially reach and treat the online community like a mission field.”

In another situation, Clayton ministered to a man through his girlfriend’s unplanned pregnancy. The child is now just over a year old. Another time, he had the opportunity to lead a fellow gamer to the Lord.

When situations like this arise, Clayton said he encourages the people he meets online to find a church in their area to attend in person and will sometimes help them do so.

“The online streams will end,” Clayton said. “Having these conversations with me may feel good in the moment, but to have somebody who proclaims the Word over your life on a weekly basis, to have a group of saints that stir your affections to Jesus and hold you accountable, I can’t do those things online.

“That’s not what I’m here for and that’s not my goal. There is no excuse, and there are multiple reasons why you need to be involved with a local church. I can’t reach everybody in every community, but we can make disciples who make disciples. The Kingdom of God doesn’t rest and fall on my ability.”

Despite the unconventional nature of his position, Clayton said he cannot ignore his burden for the lost among the online community.

“Most of the younger generation from under 40 years old to young kids are spending a majority of their time online and on social media platforms, and we as Christians are commissioned to be conduits of grace and ambassadors of the Kingdom,” Clayton said.

“I can sit here and complain about the forum itself, or I use the things and avenues of the online world to reach people. I will never say all of those people in the online community are not worth it. These people aren’t coming to church, so how will they know unless someone goes and preaches to them?”