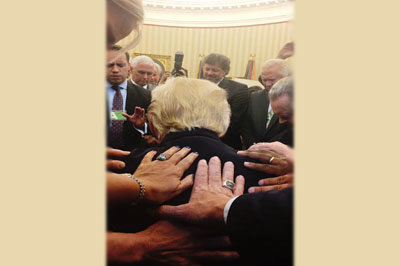 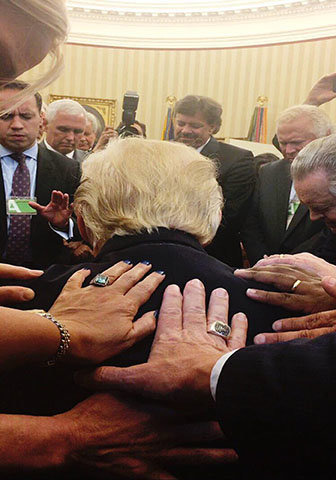 Evangelical leaders laid hands on President Trump as they prayed for him July 10 in the Oval Office. JOHNNIE MOORE/Special

WASHINGTON (BP) — Participants in an impromptu Oval Office prayer meeting have described the experience as "encouraging," "humbling," and in keeping with Scripture's command to pray for government leaders.

According to media reports, some 30 evangelical leaders were involved in the July 10 gathering, which included laying hands on President Trump at the Resolute desk and prayers voiced by charismatic pastor Rodney Howard-Browne and immediate past Southern Baptist Convention president Ronnie Floyd.

"I prayed for protection for the president and vice president as well as their families," Floyd, pastor of Cross Church in northwest Arkansas, told Baptist Press in written comments. "I asked God to provide for them His wisdom in all decision-making, helping them to see things like God sees them.

"I then appealed to God to lead them forward into the future as our leaders, giving them His favor, and then I appealed to God to bring our nation together. Finally, I asked God to usher into our country a great sense of urgency, helping us to see that our greatest need as a nation is a spiritual movement of God," said Floyd, adding the experience was "quite humbling."

News of the prayer meeting broke earlier this week as some participants posted photos on social media. The time of prayer capped a 15-20 minute visit with Trump at the end of a day-long meeting of the White House's Faith Leaders Initiative, an informal working group that advises the White House on issues of importance to evangelicals, said Jack Graham, a participant in the gathering.

Graham, a former SBC president, said the Faith Leaders Initiative was convened by the White House Office of Public Liaison to offer counsel on issues ranging from religious liberty and the sanctity of life to U.S. relations with Israel. Some members of the group served previously on Trump's Evangelical Executive Advisory Board, formed during the 2016 presidential campaign.

When senior advisor to the president Jared Kushner stopped at the meeting, participants prayed for him, Graham told BP. Kushner subsequently told the president and vice president about the experience, and Vice President Mike Pence escorted the evangelical leaders to the Oval Office for an unscheduled visit with Trump. 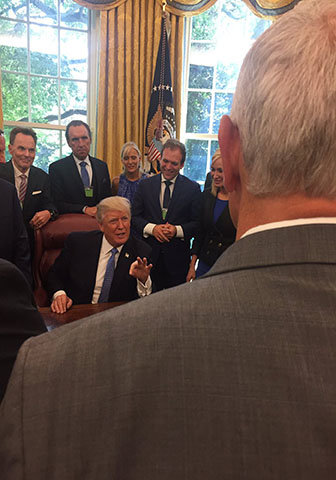 "Once we were in the room, the president was in great spirits," said Graham, pastor of Prestonwood Baptist Church in Plano, TX. "His disposition was very welcoming, and he seemed delighted to see us. In some ways, it was like a church social because all these pastors and ministry leaders were in the room along with the president and vice president."

Page said he "was honored to be a part of the group of faith leaders" who met and prayed with Trump.

"We received briefings from several White House officials, including Vice President Mike Pence and special advisor Jared Kushner," Page told BP in written comments. "We received assurance of the president's appreciation for faith leaders and his desire that they be involved in helping our country move forward. We were able to deal honestly with issues such as Israel, immigration, and community ministries and programs.

"Toward the end of the meeting, we were invited to the Oval Office to have a time of prayer with President Trump and Vice President Pence," Page said.

Jeffress characterized the visit with Trump as "encouraging" and the prayer as in keeping with Scripture's commands.

Trump "gladly welcomed the prayer," Jeffress told BP. "... This was certainly in keeping with what 1 Timothy 2 tells us to do, and that is to pray for all of those who are in authority. And I could tell the president genuinely appreciated those prayers."

Floyd urged believers to do daily what the faith leaders were able to do publicly in the White House.

"We need to rise up in our churches all over America, and Christians by the millions need to rise up and pray for our president, vice president, and the leaders of our nation," Floyd said. "I prayed for President Obama and his family daily. This is not about a political party or their positions about certain issues because we are called by the Scripture to pray for the leaders in our nation."