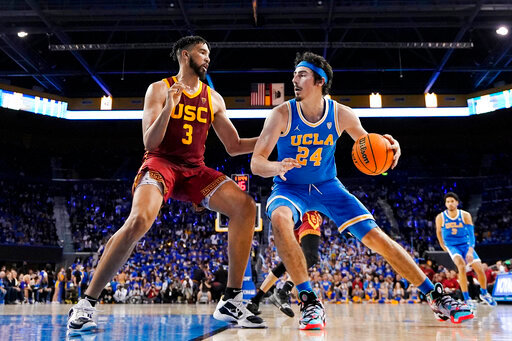 The Pac-12 can make a case as the most successful conference in collegiate athletics, amassing more than 500 NCAA championships while leading the nation in titles 56 of the past 62 years.

But when it comes to the biggest moneymakers, football and men's basketball, the "Conference of Champions” has come up short for years.

The lack of success, particularly in football, combined with the conference's media rights missteps have put the Pac-12 on shaky financial footing, opening the door for two of its marquee schools to jump ship.

Now, with the loss of UCLA and USC to the Big Ten in 2024, the conference and its remaining member schools face an even more uncertain economic future.

“You have exploding costs on one end and your revenue sources are being decimated, which is a tremendous pressure,” Smith College economics professor Andrew Zimbalist said. “On the other hand, what do you do? Well, something pretty radical I think is going to have to happen.”

The Pac-12's dilemma has been building for years.

Once a powerhouse football conference, the Pac-12 has been a bit player in the national championship conversation of late.

Since Oregon was blown out by Ohio State in the 2015 championship game, the Pac-12 has had one team play in the College Football Playoff: Washington in 2017. Oregon has fallen off since Chip Kelly left for the NFL in 2013 and Southern California, once the conference's marquee program, never fully got back on track after the NCAA sanctions of the Pete Carroll era.

The lack of success made the Pac-12's football games maybe-watch TV, which in turn has made it more difficult to lure top coaches and recruits away from rival conferences — particularly the football juggernaut SEC.

“In the old days, USC and UCLA would be right up there at the top of the national football heap every year, and they've fallen way down,” Zimbalist said. “And so you need some fill up, some boost to get them to a point where they can really be a strong, strong franchise again — and I just don’t see that.”

The Pac-12 drop-off was compounded by its media rights deals.

As TV packages began to bulge, former Pac-12 Commissioner Larry Scott pushed for the conference to build its own network instead of partnering with ESPN, Fox or another network. A self-sustained network would allow the Pac-12 to control programming, showcase its highly successful Olympic sports and reap all the financial rewards.

The Pac-12 Networks never soared like Scott envisioned, bogged down, in part, by an inability to reach an agreement with DirecTV, which prevented the conference's sports from reaching millions of homes.

The Pac-12 did work out a lucrative deal to have some of its games shown on ESPN and Fox, but the networks often wanted those to fill late-night time slots on the East Coast.

The deals left the conference in a “Pac-12 After Dark” hole. The Pac-12 had the lowest distribution number among Power Five schools, paying its member institutions $19.8 million in 2021.

Finances mean stability in the world of college sports, so the lure of more money was a big driver in the departures of USC and UCLA, which said it faced cutting sports if it didn't leave for the Big Ten.

The moves in turn will hurt the Pac-12's bottom line; not only did the conference lose two big programs, its foothold in the nation's second-largest media market is going away.

"When you see the rich get richer, people are going to grab for their share,” said Tom McMillen, president and CEO of Lead1, which represents Football Bowl Subdivision athletic directors and programs.

The loss of UCLA and USC puts the Pac-12 at a crossroads.

The conference announced last week that it is pursuing all expansion avenues and pushed up negotiations for its next media rights deal; the current one is set to end in 2024.

The Pac-12 could form a partnership with another conference in need of a lift, like the ACC, which would possibly cause travel problems for smaller sports. It also could add members from a smaller conference like the Mountain West or convince schools from the Big 12 to defect, like Colorado and Utah did in 2011.

The conference also may have its hand forced if several schools bolt for another conference to find stability, perhaps to the Big 12 to form another superconference with the SEC and Big Ten.

“I think you’ll see more consolidation,” McMillen said. “This is not new. This is economics 101. There’s a lot of efficiencies. Think about all this: we have 32 conferences. There’s probably $1 billion of overhead and when you merge conferences, you're obviously streamlining some of that.”

More conference realignment is coming. The fate of the Pac-12 is still to be determined.