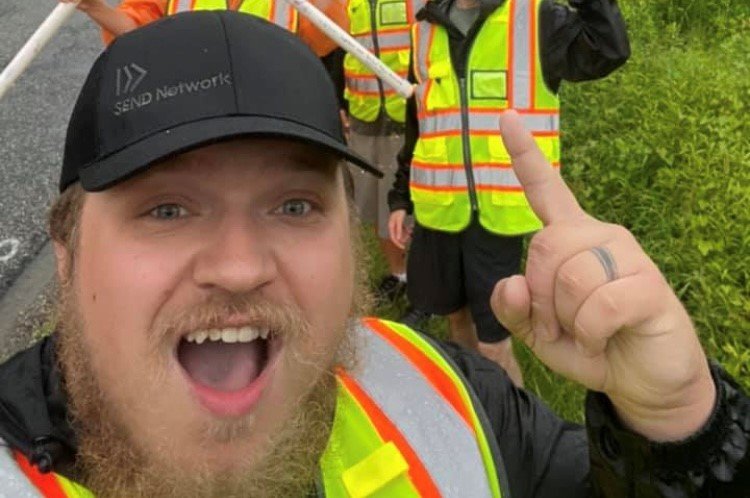 Richard Pope is making the most of every moment he has left, preaching the gospel with elevated velocity since he was diagnosed with cancer. (Photo/Richard Pope)

SALISBURY, Md. (BP) – The importance of time carries a particular weight for Richard Pope, pastor of Canvas Church. It’s not something to be taken lightly, and not something he has a whole lot of.

For him, it also places a particular weight on numbers. There’s 3, as in the third cancer diagnosis he received earlier this year, the one doctors told him was terminal. There’s 2 – the number of weeks he received that diagnosis prior to launching Canvas Church. And there’s 1, pointing to a singular hope in Christ he has preached with an elevated velocity since then.

“The news changed the way I did ministry. We all know that our time here is limited and the Gospel should be the most important thing, but often we don’t live like it, myself included,” he said. “Now I see time a little bit differently. It’s made the Gospel more of a priority.” 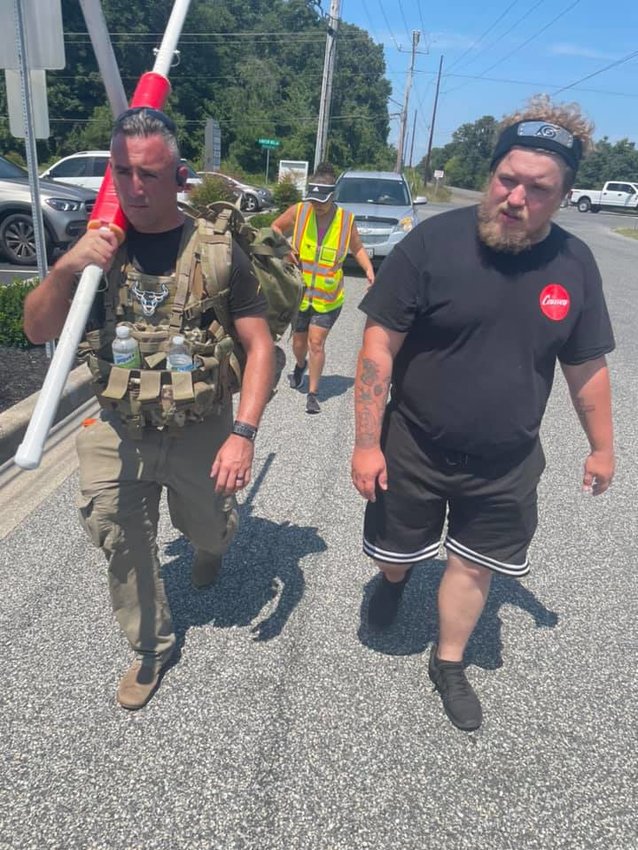 At left Jacob Day, mayor of Salisbury, Md., helps carry the cross on the last day of the Hope100. Day also serves as a Major in the Maryland National Guard. Photo courtesy of Richard Pope

His doctors estimate he has three to five years left to live because of a form of non-Hodgkin’s lymphoma. Pope, 24, said he wishes he could say he took the news well, but he didn’t.

A North American Mission Board SEND Network church, Canvas was supposed to launch two times before a little thing called COVID got in the way and delayed it until Easter of this year. He would love to have a long pastorate on this earth, planting other churches along the way. He wants his wife, Payton, not to be a widow before she’s 30. And although he loves their two dogs, he desires to have kids.

To be clear, Pope trusts that God is more than capable of providing all those things. He works within the parameters given, though, and with that mindset a different set of numbers has made Canvas one of the rarest of five-month-old churches. This year the congregation has seen 30 people come to faith, baptized 14 and is about to add a second service.

Consider this as well: although its launch was delayed, the church’s core group continued to witness and minister – 10,000 hours’ worth, by Pope’s estimation – throughout the community. It led to Pope’s accepting the 2020 Jefferson Award, which recognizes local community leaders.

People heard the Gospel and were saved over that time. When Easter 2021 and the official launch arrived, 15 new believers had joined the group.

The most recent example of Canvas’ community work came last month, when Pope led a 100-mile walk that ended at the church to raise awareness for suicide prevention and share the Gospel, as shown by the cross he and others carried throughout the walk. Each day for five days, Pope, his wife, and church members Desiree Sampson and Debra Reynolds covered at least 20 miles.

Others joined the Hope100 Walk at various times. Salisbury mayor Jacob Day, a major in the Maryland National Guard, went 15 miles in his combat fatigues and a rucksack. On the last day, around 25 members of Canvas Church walked alongside Pope. Just as many came from other churches and the community.

The Hope100 (technically, it went 101 miles) brought media attention for its address of mental health and was done in honor of Salisbury police officer Aaron “Bull” Hudson, local resident Joseph Fabber, and Pople’s cousin Michael Smith. All three lost their lives to suicide. 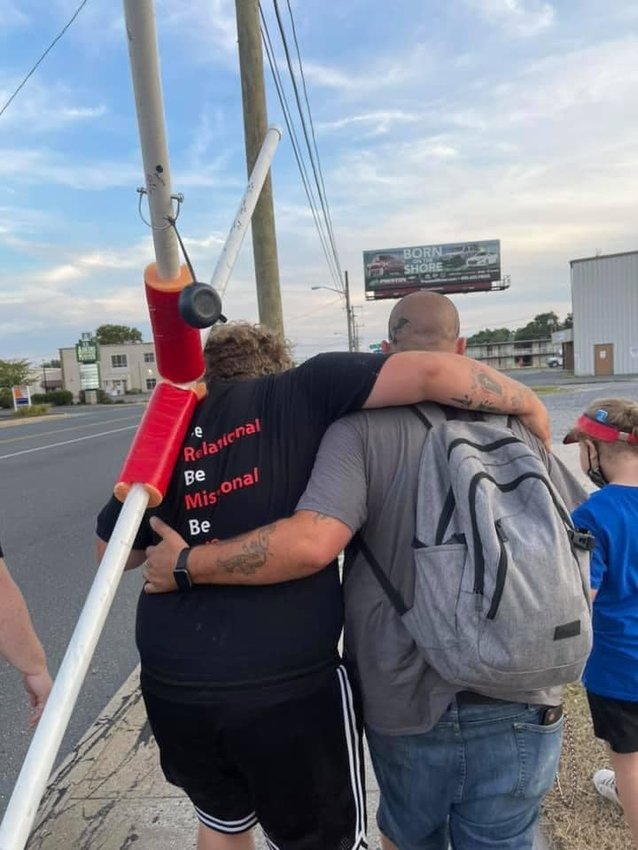 At right Rob Stockman, who was recently baptized alongside his father and daughter at Canvas Church, helps Pastor Richard Pope after Pope’s hip dislocated about a mile from the finish line. Photo courtesy of Richard Pope

Pope was 15 when Smith died. Not long after, the future pastor attempted to take his own life. Struggles with depression and mental health since then led to his decision to lead the Walk100.

The walk itself provided its own metaphors for overcoming battles and hardships. Day 2 brought high temperatures in the 90s and put the group beside a marshy area with horseflies the size of your thumb. Day 3 flipped to pouring rain. Sampson, one of those with Pope the entire way, pushed along on a scooter due to five neck and back surgeries.

“But every time we thought we couldn’t do it anymore people would show up to encourage or help us,” Pope said. “If we needed Chick-fil-A delivered to us on the road, they brought it. They prayed with us. People saw us with the cross and asked us to pray for them. It was incredible.”

The first consideration was to sleep by the road each night. But Pope’s health – particularly the effects of chemo treatments – led to the decision to cover the miles, return home, then start from that point the next morning. Thursday – Day 4 – was the toughest, he said, with the end getting closer.

The overwhelming support from others carried him emotionally and spiritually on the last day. But Pope also needed help physically. As the end drew near, he stepped down awkwardly and popped out his hip. Daryl McCready, lead pastor of SonRise Church in Berlin, Md., and Canvas’ sponsor church, jumped in alongside Rob Stockman, who was baptized at Canvas in June alongside his father and daughter, to help Pope make it the rest of the way.

People stopped to watch the crowd walking down the town’s main highway. Police stopped traffic as they crossed streets. Thanks to TV and newspaper coverage, many knew the story and paused to clap, cheer and honk their horn in support.

“The last hour-and-a-half it felt like the whole city stopped to recognize us,” Pope said. “Two people came to our church that Sunday, one of them getting saved. We estimate around 100,000 people heard about what we did through media coverage, not counting social media.”

Now that Pope has walked 100 miles, will he walk 100 more? If he’s to be the man to walk those miles again to a church door, there will be some changes.