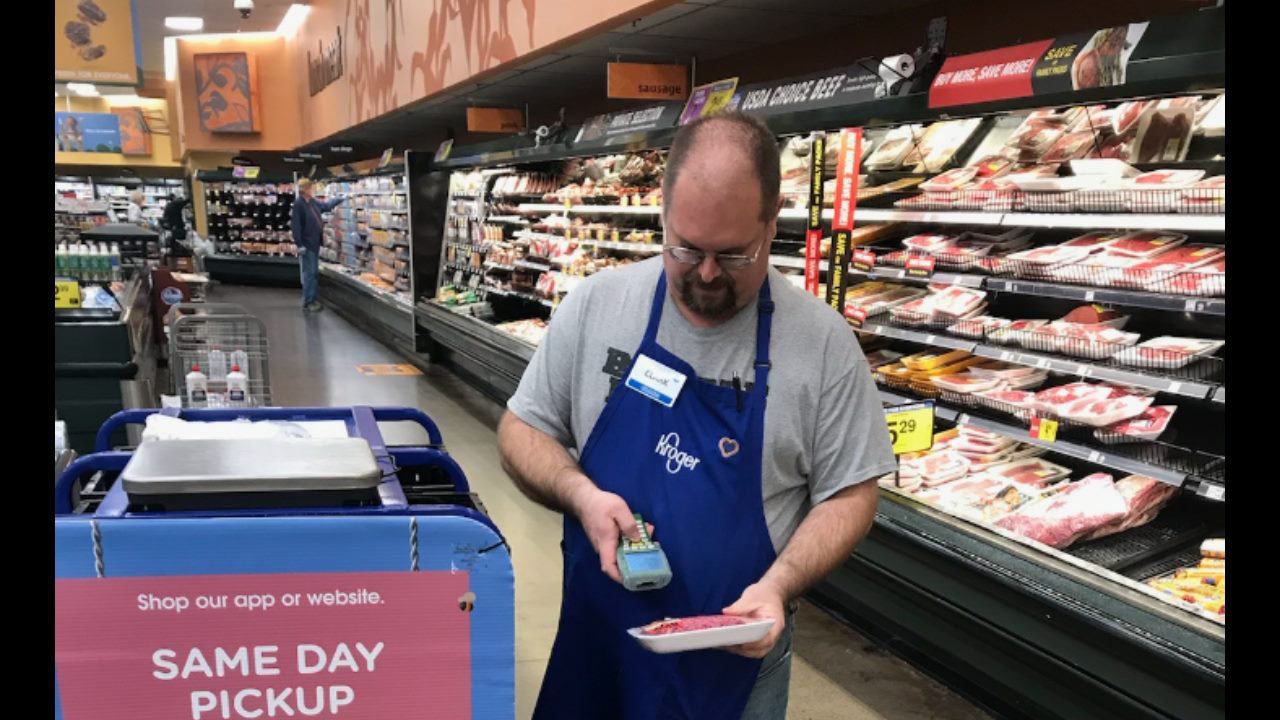 Clark Bunch, pastor of Unity Baptist Church in Gordon County, shops for a ClickList customer at the Kroger in Calhoun. BEN TOW/Special

PLAINVILLE — Last fall Clark Bunch decided to pick up some extra work at the Kroger in nearby Calhoun to supplement his bivocational position as pastor at Unity Baptist Church. Upon given the position, he was told to expect around 20 hours a week.

That remained the arrangement until mid-March, when the coronavirus crisis hit America in full force. Two weeks ago, Bunch worked 45 hours. Last week slacked off slightly to 40. This week he expects to get around that same amount. Now with social distancing in play and churches not meeting in person, Bunch’s pulpit has essentially moved from Unity Baptist to his job working the ClickList.

At his position, Bunch shops for customers who have filled out their shopping list online. When they arrive, he then carries the groceries to the car. With concerns over COVID-19, such shopping options have increased in demand so much that Kroger recently converted one of its stores to “pick-up only.”

To address the Charmin Bear in the room, yes, friends ask Bunch if he knows when toilet paper is arriving. No, he doesn’t get a special heads-up.

Bunch’s calling to the pulpit is far from a secret, in more ways than one. “The people at Kroger knew when they hired me that I was a pastor. I introduced myself to the ClickList crew as a pastor. Others in the store have caught on,” he said.

One Sunday afternoon a shopper asked Bunch when it became a trend to dress up to work at Kroger. He explained that he was still wearing the clothes he’d preached in that morning.

“Many of my Kroger colleagues are already active in local churches,” he said. “[My position] has led to some good discussions, but usually among fellow Christians.”

Unity Baptist Church consists of a small group of senior adults. Honestly, said Bunch, they could probably meet and keep the ten-person limit and/or six-feet-of-distance recommendation. However, he reported there is a lot of anxiety considering coronavirus, so his members have elected to stay home and catch his sermons online.

This brought about another issue. When Bunch became Unity's pastor in 2014, one of his first goals was to create an online presence for the church. He built their website and established a Facebook page. He also regularly contributes to his personal blog. His sermons and other church news are regularly shared among those platforms.

However, there are members who simply aren’t online at all. So, meeting via Facebook Live isn’t an option. To remedy that, Bunch decided to make an old thing new. He described what he did in a recent blog post while perhaps coining a couple of new terms.

“’Whatever it takes,’ for me, includes being backwards compatible. Our core group of senior citizens are not what you would call ‘websavy,’” he wrote. “I didn’t want them to be left out when we stopped meeting together and everything went online-only. So I did something I had never done before. I started recording my sermons on cassette tape.”

Bunch had found a portable cassette player at the church, not long after he discovered a dual tape deck wired into the sound system.

“I have been pastor since 2014 and as far as I know that machine has never been turned on during that time,” he noted. “It works great, pulling the feed in directly from the mixer. I have always known about the six or eight blank cassettes in my office desk drawer, [I] just didn’t figure I would ever need them for anything.”

So in addition to launching a website, Facebook page, and pastor’s blog, Bunch can also be credited with adding a cassette tape ministry at Unity.

Bunch doesn’t shy away from the inherent risk for grocery store workers such as himself and others whose jobs put them in contact with the public. Demand at Kroger has been high, he reported. Kids are out of school and many adults aren’t going to work. So, people are eating more meals at home.

His store is hiring more workers, but until they are properly trained Bunch doesn’t expect his hours to go down. After the weekly schedule is made employees are asked if they would like to work additional hours. Kroger, he added, has joined a growing list of grocery store chains offering hazard pay. Only, they are calling it “hero pay” and giving everyone an extra $2 per hour through April 18. Word is Kroger will be installing plastic screens between cashiers and customers to reduce the level of contact.

“I feel it is very likely that those of us working with the public either have or will come into contact with ,” he said. “The store is cleaned more often than ever and we’re trying to reduce contact and wash our hands. But I believe I risk exposure every time I come to work. I’m relying on my age and health history to put me in that 80% who have mild or no symptoms .”

Like others, Bunch is looking for the positive that can come from the crisis. In another blog post last Saturday, he told The Index, he approached the subject of how the Church faces times such as these.

“We are designed to respond to a challenge,” he said. “Physical work makes the body stronger, so exercising our faith makes it stronger as well. We are forced by this crisis to be the church outside of the building.

“We can come out of this with stronger ties to our communities. Being a healthy New Testament church is not a spectator sport.” 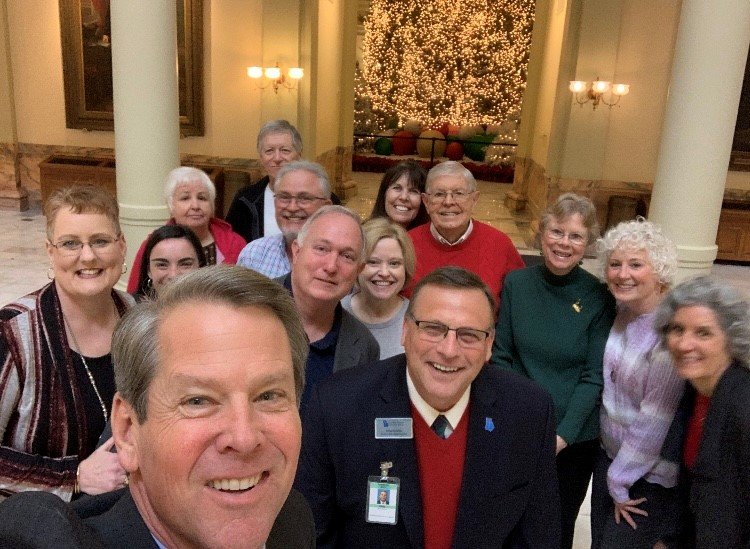 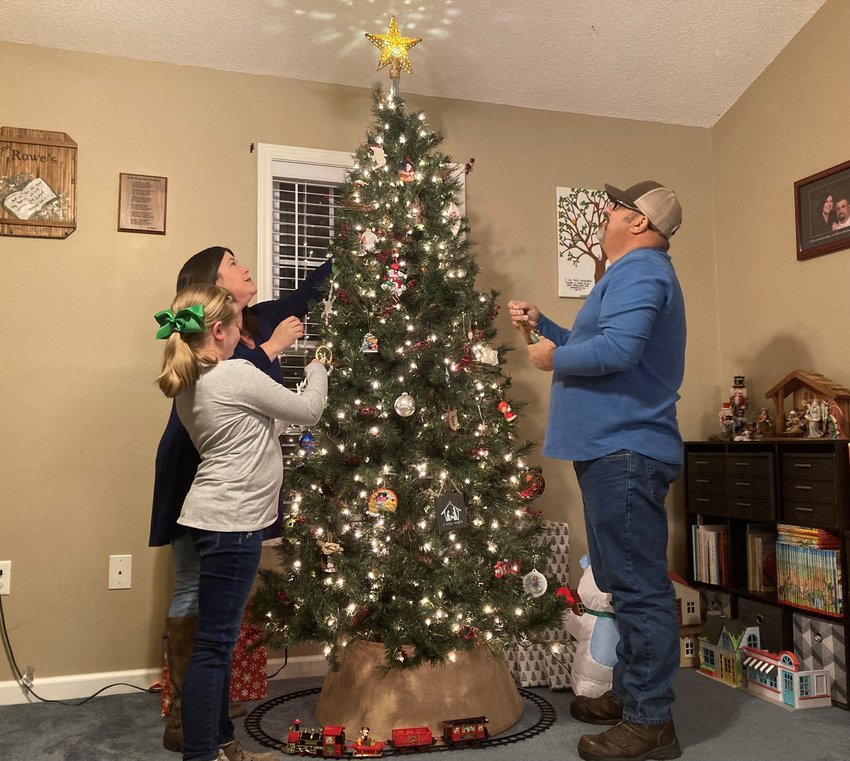