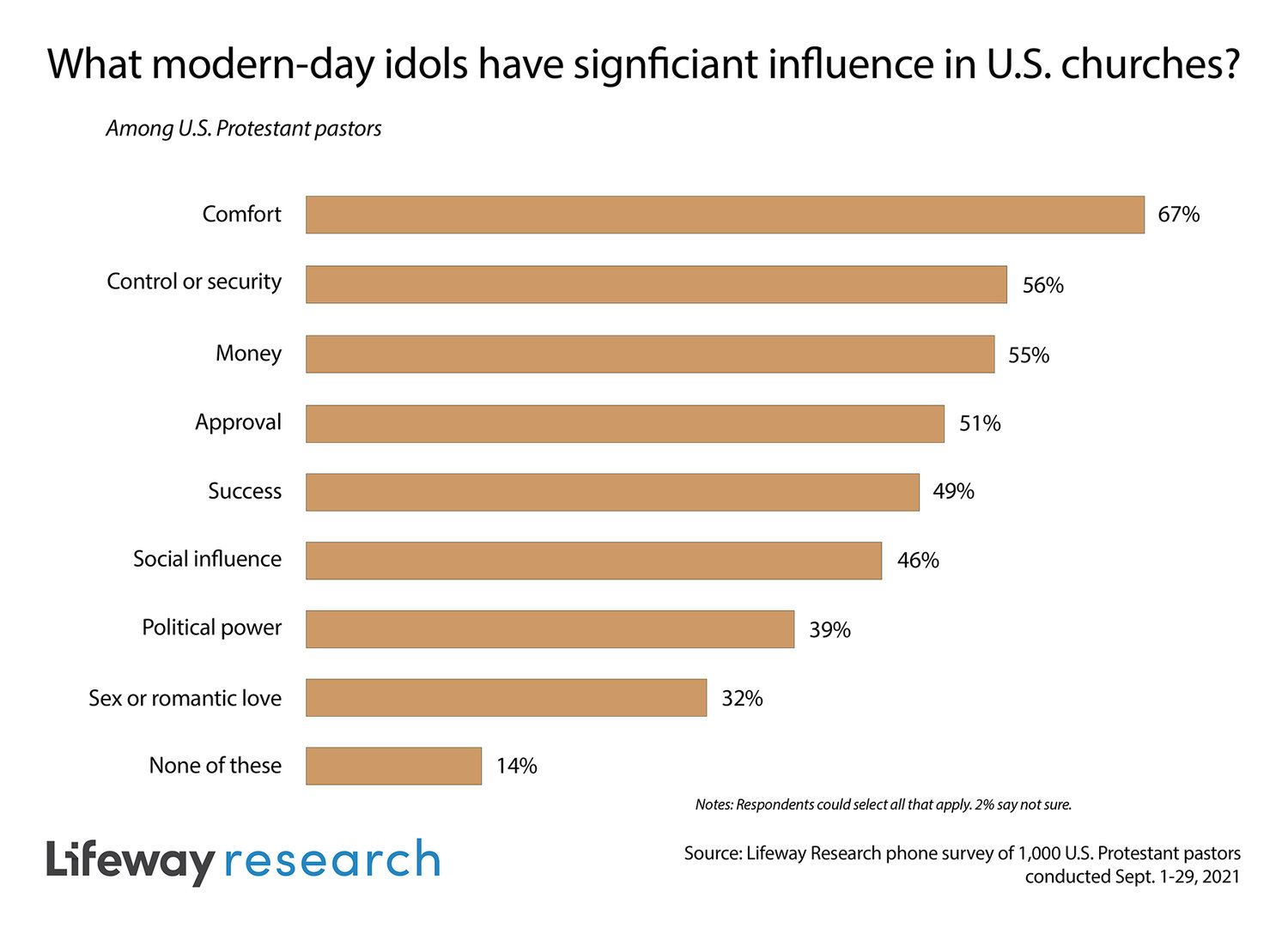 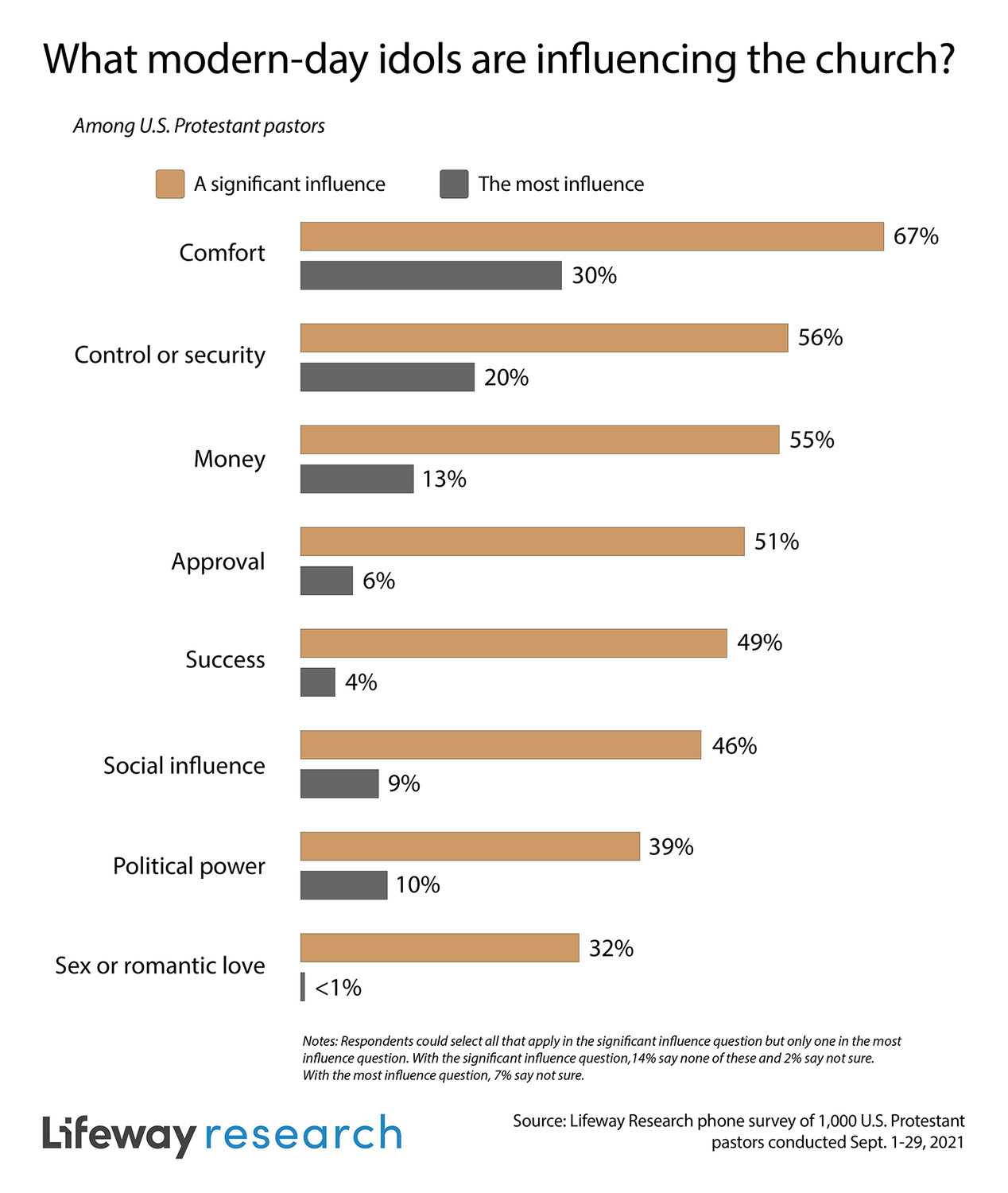 NASHVILLE, Tenn. — Idols don’t always come in the form of carved statues or reside in places of worship. Many pastors believe modern-day idols can be benign-looking desires with significant influence on people in their congregations.

According to a study from Lifeway Research, more than half of U.S. Protestant pastors believe comfort, control or security, money and approval are idols that have a significant influence on their congregations. When asked to choose the potential idol with the most sway over people in their churches, pastors point to comfort and control or security above the others.

“It’s easy to think that those in Christian churches have chosen their God and are faithful to Him,” said Scott McConnell, executive director of Lifeway Research. “However, pastors quickly acknowledge how divided their congregations’ allegiances can be. These gods don’t have a physical shrine, but they compete for the hearts of Christians.”

While most pastors point to comfort, security, money and approval as potential idols, just under half say success and social influence are idols in their congregations. Nearly 2 in 5 say political power is an idol their congregants face, and nearly 1 in 3 identify sex or romantic love as an idol. Only 1 pastor in 7 says none of these are idols with influence in their churches.

Furthermore, older pastors are less likely to identify any of these potential idols among their congregants. Pastors over age 55 are more likely to say none of these are idols in their churches.

“The large differences we see between younger and older pastors cannot be definitively explained by this study,” McConnell said. “There are signs that younger pastors are of the mindset that idols are rampant today, whereas older pastors may be slower to classify one of these as having significant influence on their people, or they may define idols more narrowly.”

Different modern-day idols stood out to pastors of different ethnicities. White pastors are more likely than African American pastors to identify political power and approval as idols in their churches. And African American pastors are more likely than white pastors to say none of these are idols in their churches.

Pastors with higher levels of education are more likely than pastors with less formal education to identify money and control or security as idols in their churches.

Pastors of larger churches are more likely to identify idols of social influence and sex or romantic love in their congregations than pastors of smaller churches.

“In many ways, the top three idols pastors recognize in their churches are related. Comfort and security draw the hearts of the most congregations, but they are often enabled by the pursuit of more money,” McConnell said. “Pastors of higher socioeconomic levels are quicker to recognize the influence of security and control while pastors of lower socioeconomic levels more readily see the draw of comforts.”

Denominational differences also play a role in how likely pastors are to say they recognize idolatrous influences in their congregations. Non-denominational and Pentecostal pastors are more likely than Methodist or Restorationist movement pastors to say they don’t see any of the potential idols influencing people in their churches.

“Americans’ obsession with pursuing more stuff is clearly seen within the church as well,” McConnell said. “The largest number of congregations battle the influence of first-world comforts, and churches’ second most common modern-day idol is the commitment to keeping secure the comforts they already have.”

Social influence holds more sway in large churches and is more often spotted by older clergy.  And Restorationist movement pastors are more likely than Baptist, Methodist and Pentecostal pastors to say the same.