Peace in the midst of a storm in Coweta County

Law enforcement and counter-protesters face off April 21 in anticipation of a rally in Newnan held by the National Socialist Movement. Screen grab/FOX 5 Atlanta

NEWNAN — In recent weeks Newnan, the governmental center of Coweta County, has also been the epicenter of “Oneness” rallies and the site of those who would like to shake the firm resolve and unity of those who live in the “the City of Homes.”

The purpose of the 1.5-mile walk, which was led by RamsCorps, a brass and percussion band from the University of Mobile, was to promote racial harmony. The walk culminated with a shared worship service at First Baptist with Carlyle preaching the message 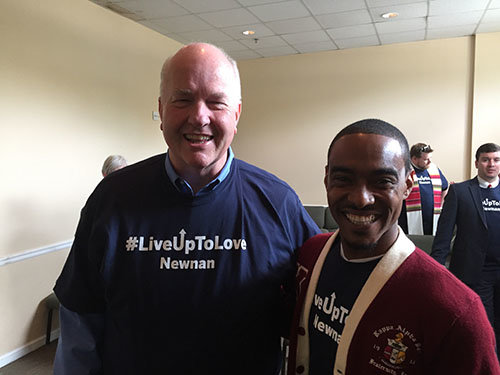 Pastor Jimmy Patterson and Tamarkus Cook, pastor of St. Smyrna Baptist Church in Newnan, stand together prior to the unity rally in Newnan. GERALD HARRIS/Index

The purpose of the Oneness Walk was designed to initiate a dialogue and fellowship between black and white believers in the Newnan area. The walk and the worship experience received high marks from those who participated and from city officials.

Subsequent to the events of March 24 ,the Nationalist Socialist Movement announced plans to hold a rally at Greenville Street Park on Saturday, April 21.

According to the Atlanta Journal Constitution the group anticipated between 50 and 100 people, but most guessed that only a couple of dozen actually showed up. The NSM leader Jeff Schoep, ‘In a loud, rambling speech, claimed his group represent(ed) the vanguard of the white race.”

Several media outlets reported that the neo-Nazis were confronted by hundreds of counter-protesters, including Antifa, the Democratic Socialists of America, and the Workers Solidarity Alliance, who were separated by an 8-foot fence and multiple public safety officers. One Newnan police officer stated that 500-600 law enforcement officers were on hand to keep the peace. For most of the afternoon a helicopter was patrolling the area from the sky to report any sign of trouble.

The potential showdown between the opposing sides, mostly from outside Newnan, was newsworthy enough to attract the attention of newspapers from New York to California, but very little media attention was given to highlight a rally reflecting the true spirit of Newnan. 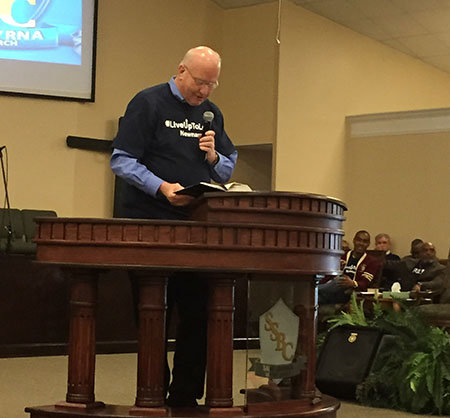 Jimmy Patterson, pastor of First Baptist Newnan, reads Ephesiasn 4:3 as the basis of his remarks on the true peace that brings unity. GERALD HARRIS/Index

The alternative gathering of people celebrating love and goodwill was held at St. Smyrna Baptist Church concurrently with the raucous rabble in downtown Newnan. The gathering at St. Smyrna was composed of local citizens, not people imported from other parts of the country, and their gathering was welcoming and convivial. Several religious groups, including Jews, Muslims, Hindus, and Christians were in attendance and represented on the program.

Patterson was one of the featured speakers at the rally at St. Smyrna. He spoke on the biblical view of peace and read from Ephesians 4:3 to support his remarks.

The tall, stately pastor confidently said in a soft voice: "Today, I have been asked to read Scripture on the subject of 'Peace.' That is appropriate because of what Martin Luther said: ‘I do not want to know anything of peace and concord when the Word of God is thereby lost.’"

The pastor of Newnan’s First Baptist Church then read about peace from God’s Word, the Bible: "…keep the unity of the Spirit in the bond of peace" (Ephesians 4:3). Patterson explained, “This ‘bond’ is not one which restricts, but one which liberates. It is a bond of Christian love (Ephesians 4:2), not a bond of slavery.”

Patterson recounted an experience he had a decade ago when he traveled to Jackson, GA to find the last will and testament of his fourth great grandfather who is buried on 202 acres of land in Butts County – a tract of land given to him after the Revolutionary War.

As he read the will recorded in 1837, he admitted that great grief came over his spirit as he read these words, “I give to my wife Lillis Lee, one certain negro woman by the name of Linda, one bed and furniture, one cow and one calf. 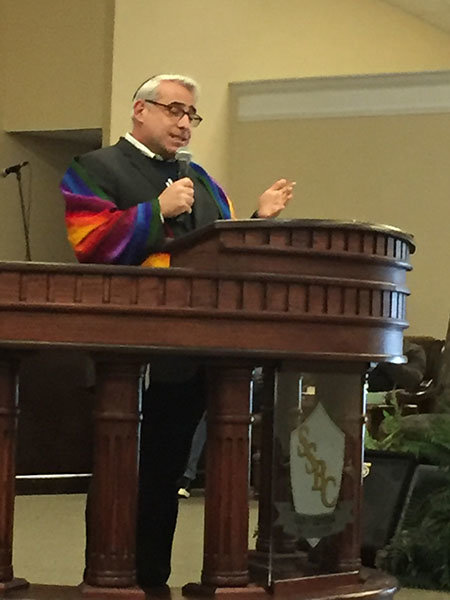 Rabbi Joshua Lesser of Congregation Bet Haverim makes an appeal for peace on behalf of his Jewish congregation. GERALD HARRIS/Index

Then Patterson added, “I, for the first time, as a minister of the Gospel, repent of the generational curse in my family which had such low regard for human dignity that it equated a person’s life with a possession to be passed on: a cow, a calf, and a piece of furniture. The sin did not stop there. It was passed on to succeeding generations in my family, even poisoning my own young mind.

“One of the best things that ever happened to me was junior high and high school athletics, where I, for the first time, shared a locker room, ate meals at the same table, and struggled toward a common goal with athletes of a different color. I learned to value and love them as my brothers.

“We must have peace with God through Jesus Christ, our Lord and Savior. When we have that vertical peace, we can then have horizontal peace with our fellow man. Ultimately, God give us peace within our hearts.”

In a day when many believe that all religions offer an equally valid path to God, Patterson clearly upheld the exclusivity of the Gospel of Jesus Christ as the only way to internal, external, and eternal peace.