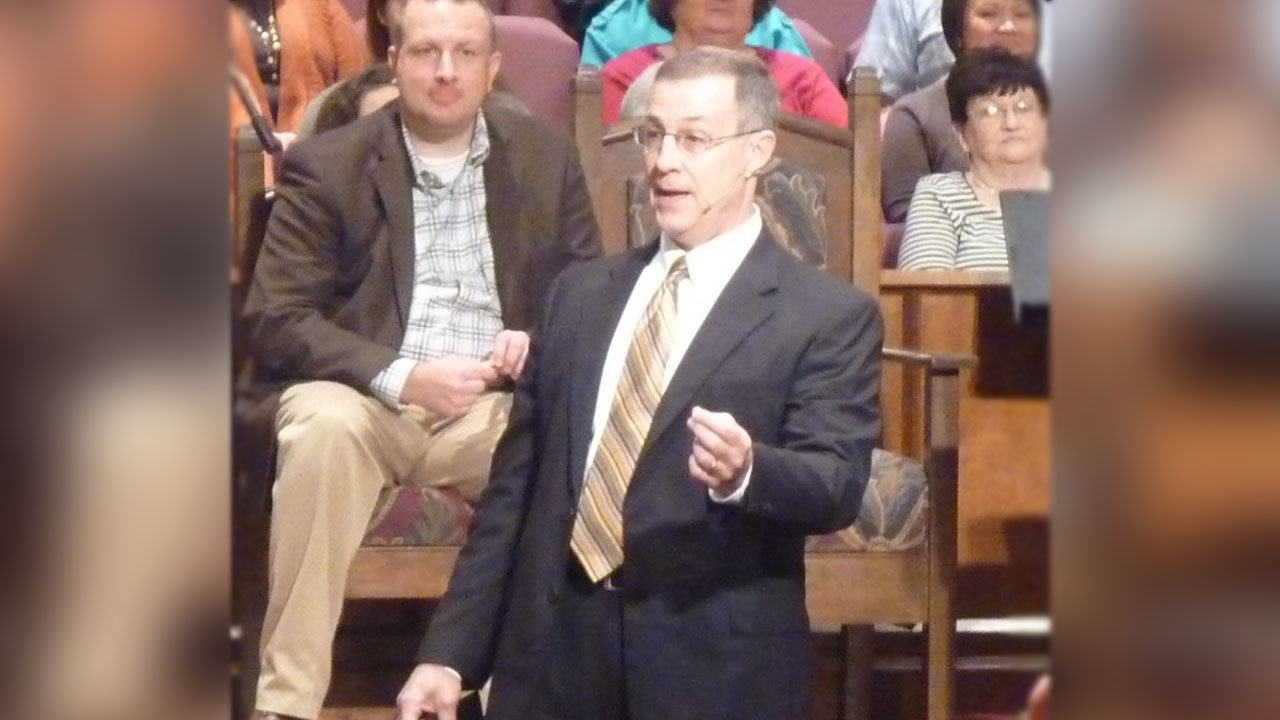 Twenty-one years later, he still remembers the moment when the way he did ministry changed. It was a hot Saturday morning, July 31, 1999. Peele, six years into his tenure as senior pastor at First Baptist Church in Eastman, was driving to Macon for a hospital visit. In the car was his wife, Karen, and little girls – 13-year-old Annalynn and 11-year-old twins Kellie and Kristen. After the visit, he'd promised them, the family would go shopping and get something to eat.

They were driving on highway 23 through the community of Gresston when a gas truck suddenly loomed into their view. That driver's attempt to miss rear-ending another car made his truck hit the Peele family's Dodge van head-on.

Emergency personnel were quickly on the scene, but it was obvious the situation was serious. Kellie was bleeding badly. Annalynn was hurt the most. She drifted in and out of consciousness as the paramedics worked on her. Later she would be diagnosed with head injuries, internal bleeding, and a broken back.

"I remember sitting there in the grass on the side of the road," remembers Peele. "I was thinking, 'God, I don't like this, but I'm going to trust you.'"

"Kellie was in the hospital for three weeks, Annalynn for three months," Peele says. "Annalynn was paralyzed from the knees down. God healed her spirit and mind. Today, she can drive and stand with braces. She can walk on a treadmill. If you saw her sitting in a wheelchair you'd wonder why she was there."

The trauma from that event affected the way he ministered. "It made me a better pastor," he says. "Made me more sensitive to people's needs." 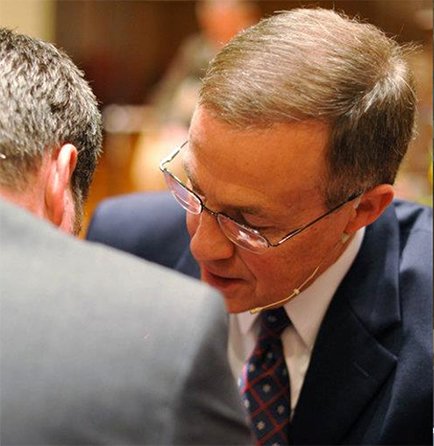 Peele, shown here praying, led First Eastman into a new era of missions both locally and beyond. FBE/SPECIAL

"That season of life strengthened the church and led to a period of revival." And as for Annalynn, "you could not meet a more remarkable young lady," he testifies.

During his first six years at First Baptist Peele had been approached by other churches to become pastor, but now his future became clear.

"The church and community really responded to my preaching and ministry," he says. "First Baptist supported us during that time. They loved us, prayed for us, and ministered to us.

"I realized this was where I was supposed to be."

Playing hooky, being a professional seeker

Peele grew up in Tift County. His father, Henry Grady Peele, was a farmer, vocational ag teacher, and no-nonsense basketball coach at four different schools, winning the Class C state championship in 1943 at Brooks County High. Jerry was terrible at basketball, so he stuck to baseball and football.

A member of First Baptist Tifton, as a teenager Peele perfected the art of going to church and crafting the appearance of being a Christian.

"I made a profession of faith at ten years old in Vacation Bible School, but I was still a seeker," he tells. "I quit going to church at 14. When church started, I'd ask my mom for the keys to get something out of the car. I'd go to the gas station instead with some friends and play hooky. I just wanted to go somewhere else."

Nevertheless, seeds were sown. His mother, Thena Peale, was an elementary school teacher and solid Christian who he testifies had a "huge impact" on him.

Peele became a good enough high school baseball player to be on the team at Abraham Baldwin Agricultural College. He would eventually transfer to the University of Georgia, playing third base, outfield, and pitching a little. He had a decent curveball and saw enough action on the diamond to earn a letter for the Bulldogs.

That was far from his biggest gain in Athens, though.

"At ABAC we didn't have many Christians on the team. At UGA, though, there was a revival going on when I got there. It began through the Fellowship of Christian Athletes and led to Bible studies when we traveled. It was a great encouragement."

In November 1972 Peele was driving his car home from Athens on I-75. His brother, who had a time of rebellion of his own before being saved and was now living in Atlanta, had shared the gospel with Jerry during a visit. Now alone in his car, Peele prayed for forgiveness and to be made new in Christ.

"I didn't become a preacher at that point, but I was hungry to grow," he points out.

"I'd never heard expository preaching before. I began sensing my last year at UGA that God was calling me to be a pastor."

The road to Eastman

In 1978 Jerry and Karen went to Fort Worth, Texas, where he enrolled at Southwestern Baptist Theological Seminary. Receiving his Master of Divinity degree in 1981, Peel first moved to Rome where he became pastor of Lakeview Baptist Church.

"Vance Havner said your education isn't complete until you pastor a country church," Peele echoes. Two years later he moved to First Baptist in Alma before going to Delaney Street Baptist Church in Orlando as associate pastor of education, evangelism, and administration.

On June 1, 1993 Peele accepted the position at First Eastman. He retired in June as the church's longest-tenure pastor.

Layfield, who arrived at the church in 2005, has witnessed Peele's influence over the years.

"Brother Jerry is a very stable pastor. He's the same guy in the pulpit that he is in the offife. He's got a great sense of humor; we laugh a lot in our meetings and times together.

"He's someone who not only loves the Lord but loves people. I've seen him walk with others through very difficult times. He's meant a lot to people through the years."

More than a pastor

Reggie Sheffield, who became First Baptist's church administrator at the beginning of 2016, has actually been with the congregation longer than Peele. Since he and his wife joined the church in 1987, he has served as a deacon Sunday School teacher.

"Jerry is one of the finest men I've ever known," he says. "I appreciate him as a brother and leader. Our kids are close to the same age and we've watched them grow up."

Sheffield has been a jogging buddy of Peele's over the years as well. "He's been not just my pastor but a close friend. We've had some good Bible studies and prayer times together." 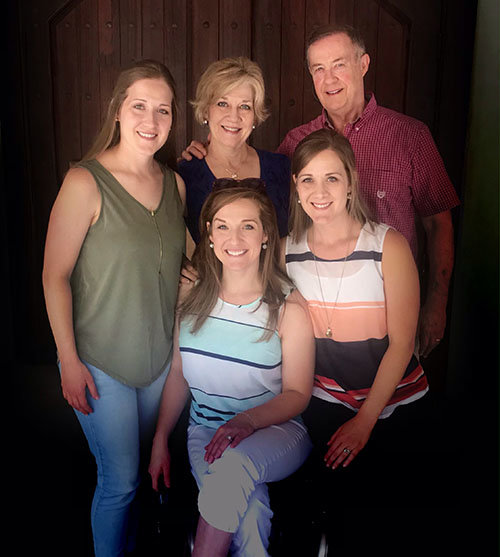 Under Peele's pastorate, First Baptist continued its emphasis on missions as well as rallied around its preacher and his call to be a light for Christ. It called a Hispanic youth pastor, Juan Sanchez, who was greatly loved by the congregation. First Eastman also led the way in planting a predominately African American congregation that became Faith in Action Baptist Church, now one of the larger churches in Dodge Baptist Association. Amid recent racial unrest nationwide, First Baptist's interim lead pastor, Todd Crosby, contacted Cecil Barden, pastor of Faith in Action to have a gathering promoting unity.

"Due to COVID-19 recommendations, we gathered in our cars in the parking lot," says Sheffield. "It was very well-attended. That was the vision of Todd Crosby and Cecil Barden. But God used Jerry Peele and his vision to bring that church (Faith in Action) to be."

"The first thing that comes to mind is his devotion to biblical authority. He preaches the Word without compromise. The growth in our church can be attributed to his devotion to the gospel not just in his ministry but in his family."