Happi Keenan died April 30. A native of Toombs County, she served for many years alongside her husband of 33 years, Pastor Chuck Keenan of Lilly Baptist Church in Houston Association, as well as a chaplain with law enforcement in Americus and Cordele.

In addition, she was instrumental in the founding of homes for battered and abused women and children in Atlanta and St. Charles, MO. She is survived by her husband and a daughter, Vita Kay, of Virginia Beach, VA.

He is survived by his wife, Lorraine; children James Roote and Pattie Roote Lowe; four grandchildren; and a great-granddaughter in addition to a brother, David, and sisters Susan Gay and Molly Lanham.

After having served as a faithful pastor for years Terry Braswell recently resigned as associational missionary after 16 years of providing leadership for West Metro Baptist Association.  A reception was held for him and his wife, Kathy, at Beulah Baptist Church in Douglasville on Sunday, July 26. Braswell is available for supply preaching, interim pastorates, etc. and can be reached at (770) 948-5563.

Pinehurst Baptist in Columbus celebrated Tony Dickerson’s 42 years as pastor and the church’s 60th anniversary on July 26 at both the morning and evening worship services. A dessert fellowship followed the evening service. Dickerson was recognized with a poem by Minister of Music and Pastoral Care Chuck Fletcher and video presentation featuring church members and representatives from Pinehurst Christian School. Chris Humphries, pastor of Calvary Baptist Church in Austell, preached the morning message and alongside his wife/Dickerson’s daughter, Kimberly Dickerson Humphries, presented special music.

Paul Baxter has been called as interim associational missionary of Pine Mountain Association. Until his recent retirement he had served as pastor of First Baptist Church on the Square in LaGrange.

Sid Davidson has resigned as pastor of Harmony Church in Houston Association.

Concordia Baptist Church in Havana, FL, less than three miles from the state border, will be having its 157th year homecoming service on Sept. 13. Services begin at 10 a.m. with a covered dish luncheon following. Garry Kent is pastor.

First Baptist Church in Ringgold will have homecoming services Aug. 23 for its 175th anniversary celebration. Worship begins at 11 a.m. with a covered dish lunch to follow at 12:30. For more information go to ringgoldfbc.net.

The senior adult ministry of First Baptist Church in Rincon will sponsor revival services Sept. 13 at 6 p.m. and Sept. 14-16 at 11 a.m. All ages are invited. Childcare will be provided for children up to age 3.

Lake Blackshear Church in Houston Association will hold revival Aug. 23-26, Sunday services at 11 a.m. with nightly meetings being at 7 p.m. Gary Leutzinger will be guest preacher.

Tabernacle Baptist Church in Carrollton will have revival services Aug. 23-26 with Jeff Meyers preaching. For more information go to www.tabernacle.org or call (770) 832-7063. 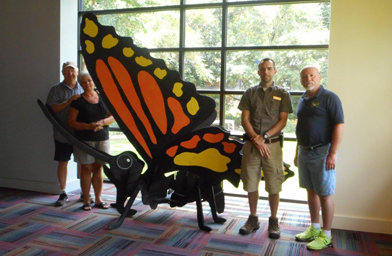 Members of Rincon First Baptist Church lent their craftsmanship at Vacation Bible School this year, building Daisy the giant swallowtail butterfly and Jose the giant tarantula as part of the VBS theme, Journey Off the Map. Both pieces were eventually donated to the Day Butterfly Center at Callaway Gardens and Georgia Southern University Center for Wildlife Education, respectively. Pictured left to right are Donnie and Deryl Greenway, Michael Buckman of the Day Butterfly Center, and Bill Gammon, designer and associate pastor of education and children.