People who read their Bibles tend to be more hopeful and forgiving, study finds 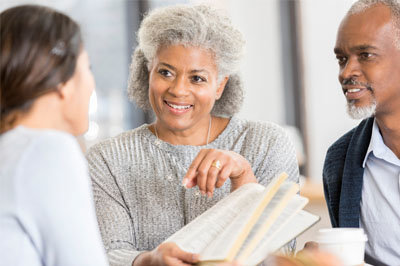 Study finds that people who read their Bibles are more hopeful and forgiving than those who do not.

WASHINGTON (BP) – Americans who most often turn to Scripture are more hopeful and forgiving but still suffer stress and trauma, the American Bible Society said in the latest release from its 2021 State of the Bible report.

“Regardless of relationship with the Bible or the church, people experience hurt. In the midst of these difficulties, though, the Bible and the church make a critical difference,” ABS said in releasing the data. “First, when people hurt, many of them turn to the Bible for help and comfort. Second, when they turn to the Bible, they are better able to cope, and they experience higher levels of hope and flourishing.

“Finally, when they are rooted in Scripture, they are better able to forgive.”

The findings are revealed in the State of the Bible 2021’s third chapter, Hope for the Hurting, released June 16. Findings are based on data collected Jan. 4-29.

The study created a Hope Agency scale ranging from 3-24 to measure a “person’s confidence that they are able to move themselves forward toward their goals, imagining a preferred future and acting to realize that vision.”

Adults described as “Scripture engaged,” those relying on Scripture at greater-than-average levels, also experienced the highest levels of hope, registering 18 on the Hope Agency scale, compared to 15 for all adults combined, ABS said in its data. Those same adults reported average stress levels, registering 13 on a stress range of 0-40, compared to 14 for all adults, 12 for respondents described as “Bible disengaged,” and 15 for those in between the two groups, described as a “movable middle.”

“Though Scripture Engaged people experience stress at approximately average levels, they over-index for hope,” the report said. “The higher levels of hope give clues to how the Bible may help them engage with stress and look toward the future with expectancy.”

All other categories other than the Scripture engaged, including the Bible Disengaged, the Movable Middle and all adults combined, registered the same hope index of 15.

Similarly, Scripture-engaged Americans registered the most severe effects of trauma, described as having experienced trauma at some point that still affects them today.

“A strong relationship with the Bible often coexists with – and could even be compelled by – the hardships of life,” the study said. “Being rooted in the Bible does not preclude tough circumstances, but may provide respite and hope in spite of them.”

Despite lasting trauma, Scripture engagement tended to be a predictor of a person’s ability to forgive.

“Scripture engagement is significantly related to evidence of forgiveness,” ABS said. “The more Scripture Engaged someone is, the more likely they are able to forgive others.”

“Our research tells us clearly that an individual’s relationship with the Bible is the single greatest influence on her or his overall spiritual health, period,” ABS said. “Nothing else comes close.”