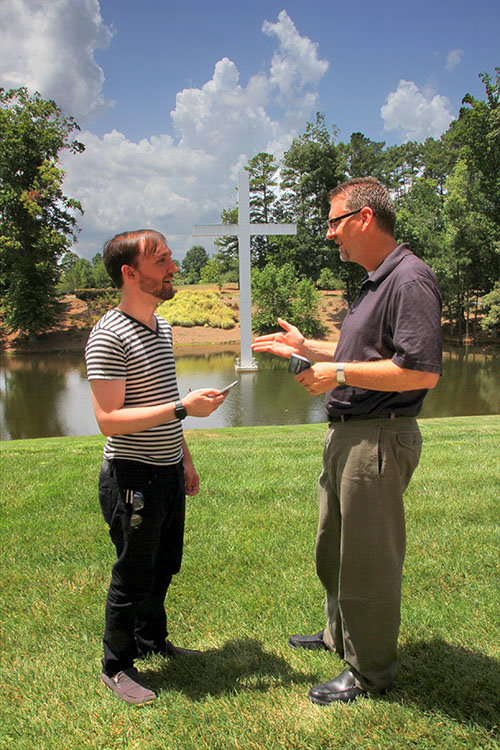 It wasn't for a lack of hospitality from Georgia Baptist Mission Board staff. The visitors may have arrived for Pikachu, Charmander, Squirtle, or another member of the Pokemon universe. As other locations have learned the past few days, the phenomena of the augmented reality mobile game Pokemon GO is lending to players going to all sorts of locales, including the White House and Pentagon, to capture the tiny monsters that came into their own in 90s.

The Pokemon GO app works with Google Maps to determine where Pokemon (original Japanese translation: "pocket monsters") can be caught. Players ("trainers") meet at specified locations, called gyms, for their Pokemon to do battle. Evidently declared a gym by the game, the cross in front of the Georgia Baptist Missions and Ministry Center brought around a dozen or so trainers to the premises yesterday. For more on the basics of Pokemon GO, click here.

"Several people came after the building was closed and walked to the fountain," said Smith, a Georgia Baptist Mission Board state missionary in Employee Services who was alerted to the visitors by security Monday afternoon. This morning Smith met with state missionaries Randy Mullinax and Larry Wynn, both of Church Revitalization and Evangelism, to generate a witnessing strategy for co-workers. In addition, Smith added, bottled water and tracts were being left by the fountain.

An email by Mullinax this morning to state missionaries alerted them to the opportunity at their workplace as well as their church.

... We are quickly organizing a group of folks to rotate through the area for the purpose of sharing the gospel. Here's the opener: "Looking for a real treasure? The greatest one is not virtual but real!" Stop by my desk and pick up a “3 Circles: Life Conversation Guide” if you want to brush up on your conversational evangelism.

We realize the concerns this may cause, but we also realize the evangelistic opportunity this presents. So let’s demonstrate the love of God by being friendly and sharing the greatest news a person can hear.

Google Maps has also placed one on most every church ... so get ready!

A hurdle for state missionaries, and church staff who should find themselves in the same position, is that trainers aren't typically at a locale for too long when capturing a Pokemon. The catchphrase long-held by Pokemon fans since its beginning – "Catch them all!" – points to collecting as many Pokemon as possible and a perspective Mullinax echoed from an evangelistic position.

"The challenge is that drive up to the fountain, click the app, drive off," he said. "Sometimes they get out of their vehicle. Let’s say a total of six come during business hours; they arrive at various times. It's going to be a very infrequent, simultaneous event, so we catch them as we can."

Mullinax related how J. Robert White, Georgia Baptist Mission Board executive director, noticed two young men on the grounds late after the building had closed. He approached them in a friendly manner and asked it they needed any help. The two said they were just admiring the area.

White asked if they were there to play Pokemon GO. "They were surprised he was aware of the game," Mullinax said. "They had a great conversation where he asked them about their relationship with the Lord. One said he is currently attending new member classes at a church where he is hearing the gospel."

Mullinax added that he and others weren't aware "private" property such as office buildings and churches could be included until this week. State missionaries are excited about the opportunity, he said, and pointed out that Scott Smith and the Georgia Baptist Mission Board evangelism team "is doing an awesome job of helping our staff and all Georgia Baptist churches become more aware of the ways technology can be used to reach more people with the gospel."

Josh, a college student from Lawrenceville,  works at a nearby business. He came to the Georgia Baptist Missions and Ministry Center to find the "gym" geotagged near the cross and there struck up a conversation with state missionary Buck Burch of Cooperative Program Giving and Stewardship Development. Quickly, Josh asked, "Are you a gamer too?"

It turned out Josh was already a Christian, but became excited about Pokemon GO becoming an evangelistic opportunity.

“This is a great way to meet people,” he said. “It's bringing people together in ways not like any other traditional video game. So people coming to places like churches can talk about Jesus.”