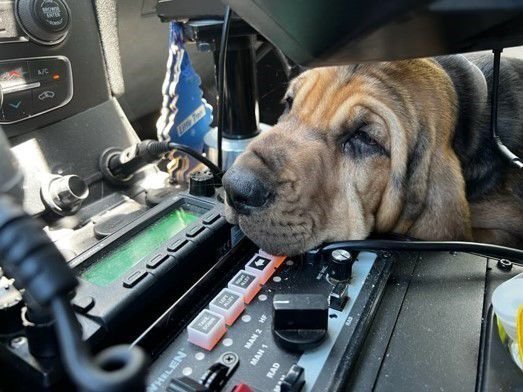 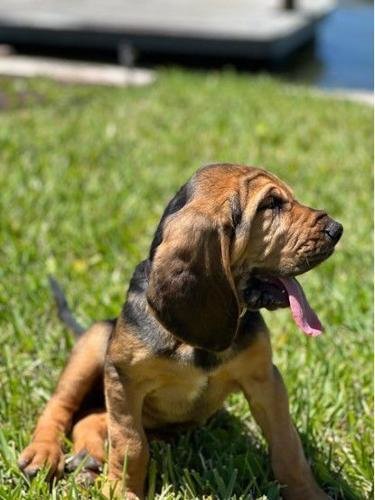 Chief, a purebred bloodhound, has joined the Glynn County Police Department team. (Handout photo)
Previous Next
Posted Monday, May 16, 2022 9:59 am
By LARRY HOBBS, The Brunswick News

The newest member of the Glynn County Police Department might not seem like that big of a deal.

After all, he ain’t nothin’ but a hound dog.

But Chief, the purebred bloodhound and his ultrasensitive nose, will soon be a valuable asset on many fronts for the county police department. And, from a public relations standpoint, this droopy-faced, lop-eared, short-legged pup’s adorability factor is off the charts.

“I fell in love with him 30 seconds after I met him,” Glynn County Police Chief Jacques Battiste said of Chief. “He’s a precious one. The people of Glynn County are going to love him.”

The 10-week-old police dog also is a legacy of sorts, named as he is with a nod to one the most respected law enforcement officers in the history of Glynn County. The acquisition of Chief was made possible through a donation from the family of former Glynn County Police Chief Carl Alexander. The money from the Carl Alexander Memorial Fund was added to a grant from the Jimmy Ryce Center for Victims of Predatory Abduction, meaning the addition of Chief to the police force comes at no cost to taxpayers, Battiste said.

“We are really excited to see all the donations people contributed in memory of Carl go to such a great cause, and a very adorable one at that,” said Carl Alexander’s daughter, Grace Alexander Albright. “We can’t wait to see the good that Chief does in our community. If he’s anything like his namesake, he will do great things.”

Once his training is complete, Chief will prove to be an invaluable asset to the force, Battiste said. Bloodhound’s are renowned trackers, equally capable of finding lost loved-ones or cornering breakout bad guys. Between the region’s attraction as both a retirement and vacation destination, having Chief on call is likely to bring happy endings to tense moments, Battiste said.

“That bloodhound has a scent capability that can track even the remotest of scents through any kind of terrain,” Battiste said. “He can be multi-purposed, tasked with anything from located a missing to child to handling Silver Alerts, such as a missing elderly person with dementia issues. And he can track escaped prisoners or felons from a crime scene. If we get a scent, he will be able to follow relentlessly.”

In addition to breaking hearts left and right around police headquarters, Chief is presently staying with one of the department’s K9 handlers, Battiste said. It has not yet been determined which officer will be his full-time partner. Chief will soon head off for training, which will be conducted in Florida by the Polk County Sheriff’s Office with assistance from the National Police Bloodhound Society.

“They like to start them off early with scent recognition,” Battiste said. “We got him at an early age, so he can become very user friendly. We want him to have as much people contact as possible.”

The recent addition of Ghost brought to four the number of dual-purpose K9’s on the force. Albright said her father would be proud to know that the department’s fifth police dog is being added to the force in his name.

“Dad always advocated for the K-9 unit,” she said. “Supporting that department was the first thought when we talked to Assistant Chief (Rickey) Evans about the Carl Alexander Memorial Fund grant.”